David Geary and I have been friends for years; he was one of the first brewers I met. We got to talking the last time I called for an interview -- as we so often do -- and he wound up promising to send me a bottle of his 20th Anniversary Ale, a wee heavy spiked with vanilla. "It's nice," he said.

Well, yeah. I've been meaning to get to this one for about two weeks, and finally did tonight. Shouldn't have waited! There's a hit of vanilla in here that winds up with the malt very nicely up front, then a strong undercurrent of bitterness lifts it and moves it around. Lots of vanilla, cocoa, and malt flavors, really a beer you could sit and puzzle over. I've seen numbers between 7.6% and 8.0% ABV, so it's big, but not huge. If you see any, get it.
Posted by Lew Bryson at 22:52 2 comments:

This stuff's so new it doesn't even have a real name yet. I heard that Victory was brewing a dry stout for the first time, a stout that was a true session beer: 3.7% ABV (!!), full of roasty malt flavor, and wonderfully drinkable. I was out that way yesterday, so I dropped in and got Big Sales Mahoff Steve German to pour me some (this is an exercise that takes virtually no effort, especially in the mid-afternoon: "Beer? Okay!"). Up-front truth: this is a work in progress, and is only on at the brewpub in Downingtown, PA right now. It needs tweaking to get the carbo/nitrogenation just right; it's too light and fizzy right now. But the flavor is excellent, piquant notes of roasted grain, coffee hints, and not at all watery, as you might expect at this alcohol level. And since dry stout is a great beer for Weight Watchers, I'm ready to see this one show up at a bar near me. Soon.
Posted by Lew Bryson at 15:23 2 comments: 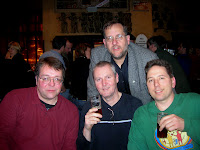 I've been wrestling over an issue that people keep telling me is my fault: big beers get all the glory, while "session beers" get ignored. I complain to brewers that they put too much emphasis on their big beers, their "extreme beers," and they respond that I (and other beer writers) do the same thing.

As I explain in the February Buzz on my website, for a variety of reasons, they're right. We do always talk about the big beers, the crazy beers, that beers that grab us. They're interesting, they stick out, and even the failures are fun to talk about. Session beers get forgotten. (Except when you drink them in Düsseldorf with Guy Hagner, Tom Baker, and Nick Bruels.)

Not to smack, but sites like ratebeer.com and BeerAdvocate.com are, if anything, even worse. Their "best of" lists of the beers that their thousands of members have rated as "Da Best!" reads like a beer geek's wet dream: 7+% ABV, 90+ IBU, 20+P OG, reeking and funky as a chili-shack outhouse. (If none of that jargon makes sense to you, sorry: it's alcohol, bitterness, and -- essentially -- heaviness.) Yeah, there are a couple exceptions, but you can't help thinking that if these guys had their way, they'd be lying around in a swollen-tongued stupor every weekend.

Time to right that balance: The Session Beer Project. I'm going to try to post notes on session beers at least four times a week: tasting notes, style notes, food pairings, critiques, rants, praise, despair, news, whatever. I'm just one voice among many, but it's time to start. I know there are people out there who feel the same way I do: feel free to piggy-back, copy, emulate, link, get inspired, or just comment.

Fair question, especially since my definition doesn't necessarily jibe with the standard one of beers under 4.5% ABV (that's Alcohol By Volume; Budweiser is 5.0%, for comparison). For me, session beer has a number of subjective qualities.

1. Alcohol under 4.5%. Once you get above 5%, things change, in my long experience with beer. Below that, you can drink at a moderate pace and not get heavily flummoxed. Try knocking back 6% beers at a session pace, and you'll be making an ass of yourself in short order. Believe me: or just ask my brother-in-law about the night at his place with the sixtel of Stegmaier Brewhouse Bock. I always say that session beer is beer you can drink while you're playing cards, without worrying about gambling away your house. An update: upon reflection, and more research, and a lot of drinking, I revised this number downwards from the original 5.5%. For purposes of the Session Beer Project, I'm calling it session beer at 4.5% and under.

2. Flavor in balance. A session beer can't be insanely hopped, syrupy with residual sugar, or funkier than hell. The whole idea of a session beer is that you can drink them smoothly glass after glass without anything cramping your palate. Plenty of flavor is fine, but nothing overpowering.

3. The beer doesn't overpower the conversation. Session beers shouldn't make you interrupt the conversation and start geeking about how marvelous the beer is. Session beer is more about backup than topic, it's something you drink while you're talking, not something to talk about. Er...this blog is an obvious exception.

4. Reasonably priced. There are some very quaffable beers out there that are, for some reason, wicked expensive. If you can afford to do sessions with them, God bless you. The rest of us? Reasonable is the keyword.

That's what we're talking about. The first tasting note follows.
Posted by Lew Bryson at 13:26 20 comments:

Seen Through a Glass, Darkly...and Lightly

Welcome to my blog: Seen Through A Glass.

Why a blog? I mean, I have a straight-up website, isn't that enough? Blogs are things amateurs do, right? Blogs are the mimeographs and office copiers of the 21st Century, sloppy newsletters from sloppy people.

Well...I did one of those sloppy newsletters, back twenty years ago. I called it Horseshit Times and then (when I got a bit more mature (and married)) Downwind. That's where I first practiced writing for the public: humor, beer rants, silly crap.

If I want to do that now, a blog seems perfect. Even better, actually, because the problem with Downwind was that it was a pain to produce. I was pushing the software to the limits, collating and stapling, mailing and passing it out by hand... But thanks to Blogger and Google, not only is this free, better-looking, and disseminated immediately to the entire world (thanks, Google), I can write in it, produce it, publish it, from anywhere with a 'Net linkup. I LIKE that.

More to the point, I have a real reason for doing this kind of thing now. I'm a freelance drinks writer by trade, and this blog (and the website) are part of my promotional activities. It's advertising, it's promotion, it's communication with my readers, it's support for my books. I do all that on the website, but the website, while more capable, takes more time. I need a more rapid response medium.

So I'll be using this for quick stuff. Mostly, to start with, STAG is going to be a place to start up my Session Beer Project (more on that shortly). So I'll be doing a lot more quick tasting notes and short rants, as that hits me. It's going to be as informal as "The Latest" is...okay, was on my site, when I was keeping up with it. The idea for the blog is short, sharp, and frequent writing.

I want to keep up on local stuff, too: local to southeast PA and the adjoining states. I dropped the ball on local news last year, and I want to get back up to speed; here's where it's happening.