Missed a few there.

I got really sick for a while; a head cold that knocked out my sense of smell, and a cough that kept me from getting any kind of decent sleep for about five days. Add to that a quick trip to Ireland to visit the new Tullamore Dew distillery (much more on that soon), on which I may have pushed things just a bit...and I was in no shape to even write a blog post, much less one in which I was reviewing beers or whiskeys. My apologies. But I'm back now, with enough of my senses and wits about me to get to work on this!

Music? I'm in Colonial Williamsburg for the Ales Through The Ages symposium this weekend (more on that very soon as well!), and I'm working right next to Chowning's Tavern, where this song, "Nottingham Ale" was recorded in 2010. Seems appropriate. Enjoy!

I totally crushed one of these when I arrived in Williamsburg last night after about six and a half hours on the road from Philly, and let me tell you: refreshing. Looking forward to a more relaxed and reflective sampling today. (My thanks to Carl and Joan Childs, my brother/sister-in-law, who are hosting me in Williamsburg this weekend, and whose refrigerator I'm raiding for these samples!)

Again, as I sit here on Duke of Gloucester Street in Williamsburg, carriages and contemporary-clothed guides rolling and strolling by, I thought it would be a good idea to have a truly American beer, and cream ale is all that. Snarl and snark as you may about light, fizzy beers, cream ale is, in my opinion, the apotheosis of that whole category; light and fizzy brought to a peak of not lightness and fizzyness (because that would be this shit), but to the optimal intersection of light-mouthfeel-sweet-bitter-tasty-refreshing,

Hardywood's version zeroes in on that intersection pretty closely. I've been drinking a lot of the classic Genesee Cream Ale recently (the brothers-in-law in upstate NY always have a suitcase of it cold, and that's a long drive too!), and if anything, the Hardywood's maybe a little too flavorful. If so, that's a 'flaw' I'm more than happy to overlook. Nose is sweet, even a little fruity, with a yeasty-hoppy cut to it (the beer's unfiltered, and that's my only issue here: did it have to be hazy?), and that all follows through on the palate. The finish manages to be...wet, almost like a little splash on the tongue (and just a hint of bitter pull) that makes this such a refreshing beer that I'm a third of the way through it without intending to have had more than a sip or two. Beautiful session beer at 4.4%, too.

Very impressed with the way Hardywood Park Craft Brewery has handled beers from their barrel-aged big boys (including the vaunted Gingerbread Stout) down to this light, happy drinker; haven't had a bad beer from them yet. Add to that a cool sense of history: Richmond was where canned beer was first introduced, in 1935, so of course this comes in cans. Well done, Hardywood, well done. 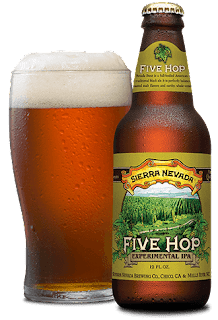 That said, I've been let down through over-expectation, so I'm trying to tamp that down here. The new rush of experimental hop strains has not always left me impressed: "tropical" fruit, limp lemon, kinda-pine, wood grain, coconut...really? So I'm actually a bit skeptical going into this, but let's have at it.

Well...it has a beautiful cap of foam, I gotta say: Sierra Nevada brewing quality at work, there. The nose is full, but subtle; I want to say, it's this...but then I smell something else, too. Orange creamsicle, soft pine (sweet spruce?), and a fluffy general richness. A poofy pillow of a nose, but then the beer splashes in and it's sharper, brisk, and then hop-sticky on the back end. Nice change-up; you could make it to the majors with a pitch like that.

In the end, though...tasty, and well-made, but not exceptional. I'd have one, and keep hunting. Or maybe just launch another Torpedo. 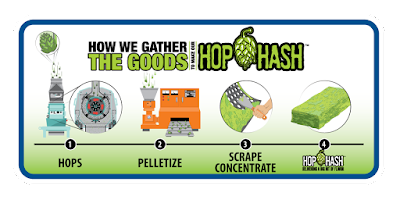 I wandered down to the Green Leafe, a student oasis, and it was cool and quiet on this summery March afternoon. What to have...the choices were good, but then I saw one I'd meant to try: the Hash Session IPA. SweetWater does this "hop hash" thing where there's more resin/lupulin and less leaf in the hop addition (I think that's right), and it's supposed to give the beer a more intense hop flavor/aroma without the "tannic" effect of the leaves. (Again, I think that's right.)

Well, I'm all for that. Let's try it. Light yellow, bright and clear, with a lemony-pine lilt to the nose. It's a bit thin on the palate, but not watery, and the good thing is that it's just right on the bitterness; it pulls and dries, but doesn't crush on the close. That's a nice beer: it's not overly bitter, it's not overly sweet, but it's not dull either. Thing is...does it call for another? I don't think so. I'm already thinking about my next beer, and it's not this one.

I remember when the taverns in Colonial Williamsburg all served Liebotschaner Cream Ale from the Lion brewery in Wilkes-Barre, and that was pretty good stuff, too!

Glad to hear you're feeling better.