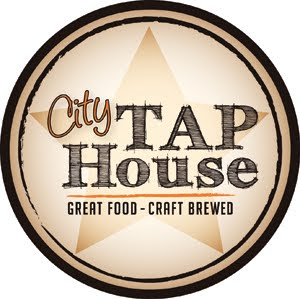 I told myself I wasn't going to get into pimping PBW events -- cuz you know, with over 900 listed events (suck that, "other" so-called "beer weaks") it's not fair to pick and choose -- other than my own, of course. But one event is setting another world beer record here in Philly, for a while at least, and I wanted to talk a bit about the venue, too, so...

City Tap House will be pouring 31 different draft Bell's beers on Monday night, June 7. This is more different Bell's beers than have ever poured anywhere else, including Bell's Eccentric Cafe in Kalamazoo, even in Larry Bell's house. That's all draft beers, pouring on City Tap House's very nice tap system. Some of these are Philly Beer Week exclusives, and you may see them around town next week, but you'll only see all of them here. What? You want a list? 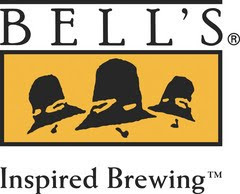 How's that? Pretty damned sweet, no? Well, let me tell you about City Tap House a little, you want to talk about sweet. Cathy and I went to the opening a couple weeks ago, and I was impressed. First, it's a huge space; two immense rooms (bar and dining room) plus a very large outdoor...what, more than a deck of a balcony, something the size of a helipad, with big open gas firepits. The food: they were bringing around samples of stuff like lamb lollichops (with a delicious dipping sauce), bruschetta, and a variety of pizzas including one with truffle-oiled mushrooms and what looked like a fried free-range egg in the center (really good, but kind of hard to split up). 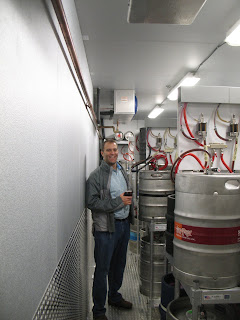 Enough about that, let's talk beer. Their taplist was simply sick, okay? They were not wasting taps on so-so stuff, at least, not the craft taps, of which there were about 50. Flying Fish Exit 4, Dark Horse, Duvel Green, plenty of locals, Founders, the usual suspects and others. Which is great, but what about my concerns that these taps would sit ignored as "them collitch kids" drank up the Yuengling and Stella? I popped that question to bar manager Andy Farrell, right after I came out of the impressively tech'd-up keg cooler (please to ignore the clearly goofy Mr. Kolesar, overwhelmed by the steel-encased wonderfulness he was surrounded by).

He had interesting news, to wit: the craft taps had been handily outselling the mainstream taps for the ten days that they'd been open. In fact, he said, they were shipping kegs of mainstream to their other operations (Field House and Public House) because they were sitting unused at the Tap House. Now, it's still very early, but it looks like Penn kids like to get their drink on with craft beer. God knows, they have the money to afford it.

Maybe we really will have a big-assed multitap that succeeds in Philly. Good thing, bad thing? I'll need to see it in action for a while longer. In the meantime...I might just mosey on down there for this Bell's thing... (Parking wasn't horrible, either.)
Posted by Lew Bryson at 14:17

I hope they bring Lager of the Lakes. This is the one event we're getting babysitting for, so that both adults in the household can attend together.