Some other big news...just for me 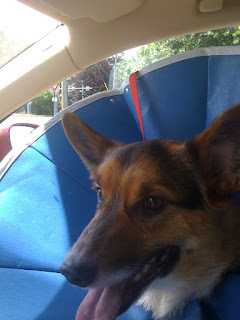 I don't like to get too personal here; that's what FaceBook is for. But the past two weeks have been really stressful, and things are getting better. My father lost a lot of weight, and we were afraid his cancer had advanced. A good friend of the family, John Lelak, our kids' "third grandfather," got an e.coli infection and dropped 12 pounds; he was in the hospital and sounded terrible. Our dog Maud had failed to heal after popping the dog equivalent of her ACL, and had to have surgery.

Things are a lot better. Maud is recovering, her sutures are healing well, and she's being very tolerant of her enforced rest. John's recovered well, sounds much better, and is working on renovating his brother-in-law's house. And my dad...well, it turned out to be a blocked bile duct that was successfully operated on yesterday. He's just been released from the hospital (with news from the latest imaging that his cancer has not spread), and told me he's really, really hungry. Best news I've had in weeks.

So...sorry to be so public with that, but I've found it really hard to focus. I hope things are better now.
Posted by Lew Bryson at 16:42

Email ThisBlogThis!Share to TwitterShare to FacebookShare to Pinterest
Labels: Family, Maud, Me

It is always good to hear things make a turn for the better. Best of luck to all those who are recovering

Sounds like you were focused on the things that are most important. Glad to hear everything is well.

Glad things are looking up!

Glad things are better, and keep believing that they always will be. It sure can't hurt.