SBP: Mild Weather in May

I didn't find mild on Friday, when we were supposed to blog about it for The Session, but I did find it in abundance yesterday, so I'm going to step into the Wayback Machine and pretend this all happened when the beer-blogging calendar wanted it to...

Mild is perhaps the archetype of session beers. It's low in alcohol, nicely flavored with malts and usually a good ale yeast, and it's a smooth, easy drinker.
But it is unfortunately hard to find. Mild just isn't that popular in the U.S., for a variety of reasons. It's looked down on as uninteresting by a number of beer geeks -- not big enough, not hoppy enough -- which includes a number of brewers. "Mild" is not a familiar beer name for most Americans, who unfortunately won't try a beer if it's called "Mild" (or "Bitter," for that matter).
On the other hand, I wasn't surprised at all to find milds at a homebrewing event. Homebrewers, for all their tendencies to go big and go crazy with exotic and experimental beers, also have a respect for uncommon beers. They also know that a flawless low-alcohol beer says more about their skill than a big, chunky beer that might be hiding flaws under heavy layers of hops and roasted malts. And they also like to drink, which mild is perfect for. I meet more and more homebrewers who tell me that they almost always have a mild or bitter around to drink every day. Sure enough, while walking around the grassy field of the Southern California Homebrewers Festival on a perfect SoCal afternoon, I came across some milds in short order. The Maltose Falcons club was pouring four of them, all on cask (That's right: four, on cask. There were about 16 other beers and meads on tap as well. This is not your typical homebrewing event, these guys are serious. I was awed): Rainier (hopped with the new Mt. Rainier hop), Oat Malt, and Alderwood (made with smoked malt), the fourth wasn't on when I made my run, and I've forgotten the name, sorry. 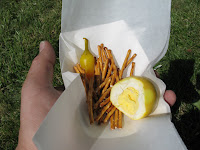 The Rainier reminded me somewhat of the Three Floyds Pride & Joy Mild, in that it was refreshing, but perhaps too hoppy for the style. The Alderwood was good, not overdone at all, but a bit odd. The Oat Malt was just what I was looking for: good malty flavor in spades, light-bodied but not thin at all, and a subtle richness that rounded things off nicely. And it was really tasty with the "Big Dick's Famous Pickled Egg" I got at another club's stand. For about ten minutes, I was in mild heaven. If not for the "try me, try me!" vibe that festivals like this generate, I'd probably have stuck with this for quite a while, and would have been happy.
The only sad thing about this was that I had to go to a homebrewing festival to find more than a single mild. To be honest, finding a mild in Philly would probably have required some serious searching. There aren't any local brewers who regularly make a mild; Victory has on occasion, Weyerbacher made a nice one back five years ago or so, and Yards has done one.
But they just don't sell. Why? Philadelphia is a town that gets cask ale, possibly more than any other U.S. town. But while pale ales and IPAs and porters and stouts thrive on cask here, milds don't even show up. I have to be honest, too: it's not a case of "milds don't sell because no one makes them, and no one makes milds because they don't sell" circular illogic. Brewers have tried making milds, and they languish in the market.
Is it the name? Is it the unfamiliarity? I don't know if I completely buy that: there are lots of people buying beers with unfamiliar names, just look at the popularity of Belgians. One of Yards' most popular beers is their Saison, hardly a household word outside geek circles.
Are they boring? Not at all, when they're made well. Maybe that's part of it, that brewers don't have enough faith in mild to make it without pumping it up somehow, over-hopping it, or smoking it, or pushing the upper edge of the style on ABV. When things like that get done to a mild, they don't ring true. It's like poodle-clipping a Golden Retriever. Just let the mild be a good mild, don't cover it up.
Getting a good mild is something that's at the heart of the Session Beer Project. The beer-blogging project this post is part of, The Session, is about milds this month: I hope it generates some interest in brewers and drinkers alike. Otherwise, mild is going to be treated the same way Tom Pastorius at Penn Brewing says dark beer is treated, like going to church: everyone talks about it, but most people don't go more than once or twice a year. 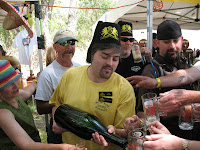 That's not enough to keep a beer alive. If you see mild, get it. If it's good, get stuck into it. I'm counting on you. And meanwhile... keep up the good work, homebrewers.
Posted by Lew Bryson at 11:01

I do believe the name prevents it from "catching on". A local changed the name of their Newgate Mild to Newgate Brown...and...BAM! Sales skyrocketed.

A rose by any other name?

I bottled my second all-grain brew last night and it topped out at a whopping 2.6% with plenty of undermentables giving it a full flavour nonetheless. Can I now nominate you as Pwesident of CAMWA?

Same thing happened at a brewpub I know in NY: changed the name of their "Best Bitter" to "Upstate Amber" and it flew...same beer, same customers. Nuts.

It was great meeting you and pouring our beer for you. One small thing, we actually had 36 other beers/meads on tap in addition to the 4 milds!

I've always lamented that the Brits had "ordinary" in the name of my favourite english style of beer. Just can't get the US market behind anything ordinary.

Time to go make a mild of my own I guess.
3.1% ABV and 18 IBUs, heaven on a warm weekday evening in the summer.

Great to meet you, too, and that date mead shocked me with pleasure, I cannot tell a lie. And what an event! Nothing like it that I've ever seen.

Hey Lew, it was great to see you finally make it to SCHBF -- I've only been beggin' ya to get out here for 11 years since I left Philadelphia behind in search of warmer climes and (back then) the great hop fix in the sky.

I _KNOW_ you had a helluva good time hanging out with the Falcons, the Engineers and the other 23 clubs. Ya know, you could write a book about this festival and its rich history. Of course that'd mean you'd have to come back out to do further research -- hint-hint -- nudge-nudge --wink-wink.

Great to catch up with you. Don't let another 11 years go by before your next journey to SoCal.

You were absolutely right, this is an incredible event, never seen anything like it. Might just have to do it again.