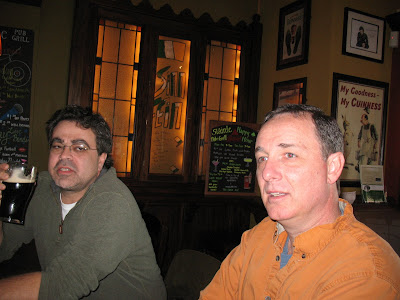 Whew. We're at McGlinchey's, and it's the first place with wifi. I got to Bridgewaters about 1:10, and there were Fuzzy and Eric, friends I went to college with 20 years ago. Years dropped away under the wash of beer: Hofbrau pils, Sly Fox dunkel, and we et, too. Delicious stuff: elk sausage and spatzel, mussels in white wine and garlic, wild boar burger, a black angus burger, and Fuzzy's...portabella sliders, that apparently the kitchen had forgotten how to make, it had been so long since someone had ordered them. And who walked in? Suzanne, Lappy, and Colin Flatt (er, and some others who didn't intro themselves) on their OWN pubcrawl. Sweet. And then Paul Rutherford, brewmaster at Iron Hill Lancaster, walked in, and that was cool, because Fuzzy works for F&M, right next to IH.

Across the street we went, to Slainte. Had Guinness and Jameson 18 Year Old. Damn nice. On to the subway to Center City, where we walked to McGillin's, for a round in the madness of Syracuse and a Flyers game. Then over to Time -- they weren't open yet -- and on to Fergies'. We had cask Grog, shots of Powers, and some unknown woman bought me a Philly Pale. Fuzz and Eric still won't tell me who she was.

Back to Time, where I got a Weyerbacher Fireside -- nice, quite smoky -- and hung out, pleasant. Then it was down Sansom to Nodding Head, where we got more Powers and The Jangler and Grog. Damn, that was good.

Now we're in McGlinchey's, like I said. We're drinking Radeberger's, and the guys are giving me shit for blogging. Screw 'em.

Good times at Jose Pistolas afterwards, too: we're eating good, and drinking good. Casey came through with a Left Hand Widdershins Barleywine: damn it's tasty. Woo. Don't know where we go from here...

We went to Monk's, and had Ephemere, Two Hearted, and Damnation. Whew. Good day. Except me missing the 9:40 R3 by two minutes, and having to wait for another 90 minutes... Eat me, SEPTA!
Posted by Lew Bryson at 19:23

Blogging in McG's DAMM you better tip the waitress.....

your stalker bought you the beer....:)

I heard rumors of you in Philly last night -- what's a girl got to do to get the call for a shot of Powers?

WOW Lew, your my hero.

What? No beer pong?

I posted before you left.

Thank you and come again!

Concerning SEPTA, how's this for a screw up:

Philadelphia's largest transit agency is embarrassed about a pass it sold that features a picture of the New York City skyline.

The pass marked with the Philly Beer Week logo is sold to discourage people from driving from one event to another during the beer festival.