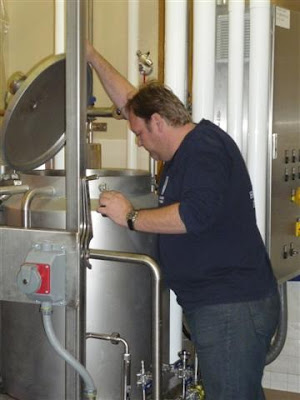 The Pittsburgh Hofbräuhaus opening continues to be the most common search term that leads people to STAG, after my own name, and I've been trying to keep up to date on it. That led me to call Nick Ellison, managing member of the franchise team at Pittsbugh HB, and talk to him today. It turned out to be a fortuitous choice of schedule: Today marked the first brew at Pittsburgh HB! (That's brewer Eckhart Kurbjuhn starting things up.)

I did a short interview with him, but I'll tell you the important thing right now: Nick said they're now setting March 3rd as the soft opening date. Here's the rest of what we talked about.

When are you opening?

We’re doing our soft opening on March 3rd, unless something bad happens. Last week we had a control box burn out on the boiler, or as the Germans put it, the steam generator. That soft opening’s just opening the doors, turning on the lights. We’ll have an invitational grand opening celebration, which will also be the keg-tapping of our Maibock, on April 29th.

Why all the delays?

It took a long time for the developer to work out arrangements with the City of Pittsburgh. We also had problems with the ability of HB to issue us a franchise – the franchise rules had changed, that kind of stuff, paperwork. I tend to forget that kind of stuff happened, now I’m worried about control boxes burning out!

Why did you decide to build there?

It’s got a lot going on around it. It’s a first-class development, great tenants: Cheesecake Factory, McCormick & Schmick's, Ann Taylor. That’s where we wanted to be. We’re in walking distance of eight universities, too, and we sell beer, you know.

When does brewing actually start?

We started today, our first beer. We’re brewing the Lager. (See more about the beers here.) That won’t be finished for the opening, of course, we’re bringing in beer from Germany.

How much of the beer will be brewed on-site?

Most of the beer will be brewed on site. We will have four beers all the time: Lager, Hefeweizen, Light, and Dunkel. We will import the Maibock and Oktoberfest. The Oktoberfest will be the same beer served in the Hofbräuhaus tent at Oktoberfest. There are regulations that the Oktoberfest can only be brewed in Munich. Of course, the rules don’t really apply here, but we wanted to do it right, so we’re bringing that in. We’ll have twelve seasonals all together.

I saw you’re going to do a tapping of the seasonal on the first Wednesday of every month, is that right?

Outstanding! I’ve heard a number of different numbers on seating: how many can you seat?

About 1,100 seating, about half of it inside. The beer garden seats 376, and a vorgarten that seats 46. That’s where you go for vorplay!

It’s all very much outside, the gartens, if it rains you get wet?

Menu’s up online (PDF warning), there may be a few changes. We’ll have pretzels served tableside by pretzel girls, the rest of the food will be waitress-order. It’s pretty traditional Bavarian. We’ve strived to make about a third of the menu traditional Bavarian food: schweinshaxe, sauerbraten, those kind of things. One-third German-American stuff: bratwurst, mettwurst, schnitzel. And about one-third is right out of Applebee’s, American food. You can get what you want; just because it’s German, you don’t have to eat German. We want everyone to feel comfortable.


Thanks to Bob Batz of the Pittsburgh Post-Gazette for graciously providing Nick's contact info. First beer's on me, Bob...I think I owe you a couple!
Posted by Lew Bryson at 10:26

The one in Cincy is pretty good, and I've enjoyed the beers, but if you've been to Bavaria, you notice pretty quickly that for whatever reason, we Americans just don't do pork like they do there.

Some things you just can't bluff.

Our pork's too lean. Guilt-free...but not exactly taste-laden. Me wonders what the hax'n will be like on an American diet.
America: fat people, lean pigs. Go figure.

Funny, because in other countries, it is the opposite. Correlation there or sheer coincidence? You decide.

I don't get the idea of a soft-opening. Is this something where customers are allowed in or do we have to wait until the end of April?

Lew - Thanks for this update. Living in Pittsburgh, the news has been scarce to non-existent. In a perfect world, daily updates would be the best. If you come to PGH, you should have a "Seen Through a Glass" meet up. Just a thought

A "soft opening" usually implies that the doors are open, the public is welcomed, but the establishment is trying to fly under the radar for a bit so that there's time to have a routine take shape.

My company is opening a new location/larger brewery in March. The first few days will be invitation only, then we'll go to soft mode for a couple of weeks. After that, the fanfare can start and the media information goes out.

A soft opening is one without fanfare -- no ads, no coupons, just a bit of a word to cognoscenti like you and me -- that gives a new restaurant a chance to find out where the rough edges are. It's kind of like sea trials for a new ship.

From my side of things, it's not considered good form (or fair, for that matter) to review a place on soft opening. I don't. May talk about it, but if it's a 'formal' review, it's only fair to give them a chance to get things straightened out.

Eric,
Not a bad idea. We could probably do something at one of the larger bars. I like it. There have been some folks who wanted me to do a whiskey event in Pittsburgh; might even be able to make some money at this...

Man Frank's in Oakland has some real whisky experts and quite a nice selection of bourbons and ryes as well.

@ JW Do you mean Frank's where the old Park Schenley used to be? A couple of blocks up from Devonshire?

Yassuh those guys are always getting tight on that whisky, and doing the tighten up like archie bell and the drells

Thanks for the response and thanks for posting the latest news on this.

All part of the service. I feel bad that I didn't post before this!

What is this fascination with Tannenzäpfle? I had a couple last year in Germany, and they were good, but...there's more buzz about this beer in the U.S. than any other German right now. Don't get it. But I'll take some Saumagen, you bet. Doubt you'll see it at the PHB, though.

There is a buzz about Tannenzaepfle in America? That is pretty cool. I have never even seen it here. The food discussion made me homesick for some Badish Pflaz sutff. If that is too trendi or passe for your tastes than trink einen Bruch Zwickel

Sorry, Klaus, no insult meant! I just never heard of the beer before last spring, and now everyone's talking about it. Just kind of odd. By all means, drink it up!

Thanks for the shout-out, Lew, and I'll be delighted to tip one with you when the time comes. But that March 3 date may be ... optimistic. At least from what we think we know. We're continuing to follow the story in Pittsburgh and hope to have a story just before the soft opening firms up a bit more. I'll keep you posted, too. (And hey "Eric": Ouch. The Post-Gazette has been writing periodically about the Hofbrauhaus, too, but it'll be more of a story when there's actually some beer in the tanks and the place is finally, after what -- three years? -- going to open.)
Best,
Bob

Hey, I'm hoping to try out the Pgh Hofbrauhaus on Saturday March 7th, if it's open. Will be going with a group for my b-day. Looking forward to it, will let you know what the status is then.

Are they going to have an outdoor smoking area specifically for cigars?

Another new date. Tentatively March 16th. Have to select another restaurant now.

Can you tell me why they are charging $8.50 for fried pickles? I've never had them in Germany or anywhere else except heard about them someplace in Zeli, or whereabouts. I don't like the idea of wasting good beer money on something I might not like - 8 fifty for pickles? Come one! They need a sampler platter or something - but I can't wait to get there - tomorrow 4/11 soft opening or not - beats jelly beans and those gawd awful marshmellow chicks!

When I was in Germany, you just went in and sat down in the fest hall. You didn't have a wait to have a waitress lead you into the fest hall and say, here's your picnic table sir. I will not wait an hour in line to get a seat here again. If they want authentic German atmosphere, they have a few things wrong. If I want to wait in line to get a table, I'll go to any other American restaurant. They also need a rope to separate the entry into those waiting for a table and those going to the bar. It's a pain getting past those people just to get into the bar. Did anyone consider the logistics here? Apparently not. The beer and food are good but I won't go back until they get these issues resolved.

I've been to the Hobrauhaus in Munich. The food is authentically German. German draught beers are great because they have no chemical additives and are naturally carbonated. You don't get bloated from naturally carbonated beers. I found I could drink more there, without getting that "I'm full" feeling.