Winding up the year, starting the next one

Well...I had a really horrible 9 hour drive through Wednesday's snowstorm (a drive that usually takes about 5 hours) to my in-laws in upstate New York. But at the end of it, we got stuck into some seriously good beers: DC Brau's On The Wings of Armageddon (a jaw-slapping double IPA) and a jug of Selin's Grove's SNAFU IPA from Friday the 21st (when Nora and I dropped in at the brewpub for their 16th anniversary), and then some Smuttynose Big Beers: Zinneke (a Belgian-type stout that was good but wasn't fantastic), Scottish (delicious malt pillow), and Gravitation (a marvelous quad-type that really kept the malt train rolling along, rich and tongue-heavy).

Thursday...we recovered, and then Friday the bros-in-law and I went out to Sticky Lips BBQ in Henrietta, NY. The catfish was good (the fried pickles were just okay), the ribs were good, and the pulled pork was great. I had an Ed Fitz Porter (an always favorite) and a Three Heads The Kind IPA (excellently hoppy and brisk, even more so at $4 a 16 oz. glass). I had some GoldenCold when we got home. Saturday? Another long drive through snow, and some beers at the end...and a few more tonight.

But look, tomorrow is New Year's Day! As we've done for a few years now, we'll be going to Memphis Taproom for a late lunch (they have their full brunch menu from 11 AM to 3 PM NYE and NYD; late lunch, late breakfast, whatever, right?), then picking up some bratwurst at Rieker's for our midnight grillfest. I've got a magnum of Dupont Avec les Bons Vouex for the celebration.

Now, New Year's Day is a conflicting set of traditions for me. I've been watching the Mummer's Parade since I was a little kid -- on television, never been able to get down there... -- but Cathy has never understood, appreciated, or wanted to get anywhere near the Mummers. At all. Which may have something to do with why I've never been able to get to the parade, come to think of it. The other tradition is spending the day with my brother-in-law Carl and his family...but they couldn't make it this year; neither could we, actually. So we're on our own, and it turns out that there are some really good things to do on New Year's Day.

Pretty sure we can find something (fancy a Narwhal?).

Then we've got a private drop-in party to hit, followed by the annual whoopee at Local 44, where they celebrate their opening anniversary on January 1st (I'm hoping to snag some of the Lees Moonraker). Then it's back home, where I guess we'll have to have some amount of pork and sauerkraut, just because I'm a Dutchman.
Posted by Lew Bryson at 21:40 3 comments:

Got a couple Christmas gift ideas for you. 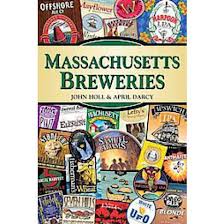 First, Massachusetts Breweries, by John Holl and April Darcy. It's one of the series of Stackpole Books brewery guides that my editor and I founded (and perfected, if I do say so myself), and it's a great job. John and April have captured the spirit of my intent with these books -- tell the story of the brewery, and make the place and the people come alive for the reader -- with writing that's accurate as well as lively and entertaining. It reads well, and it reads right. If you're headed to Mass, and you have a thirst, or just an itch to do some beer traveling, you'll want this book. And you still have plenty of time to get a copy from Amazon. 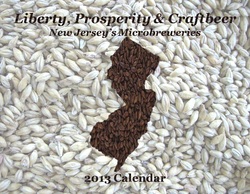 The other idea is the Liberty, Prosperity & Craftbeer Calendar, a New Jersey brewery 2013 calendar produced by Gretchen Schmidhausler, the long-time brewmaster at Basil T's in Red Bank. Now, I know what you're thinking: I don't live in Jersey, what the hell do I want with a NJ beer calendar? (You guys from Jersey, you already ordered one, I hope.) Let me tell you: the pictures of brewing scenes are beautiful. No matter where you live or drink, you'll be thinking of beer when you look up at this great piece of brewery enthusiasm. Get one today, because you get free shipping if you order by December 20; click here to get one. 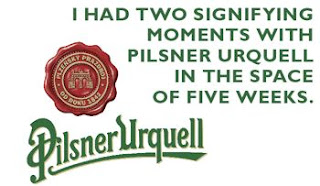 The first was in September. I was at the brewery in Pilsen, in the Czech Republic. We saw the huge, modern brewery with the big copper brewing kettles (heated by direct fire) and the massive stainless fermentation and maturation tanks . . . all aboveground. Then we were led below ground, into nine kilometers of tunnels cut through the native sandstone.


Down here, in the dim, wet halls where all Pilsner Urquell used to be lagered in great wooden barrels, they still make a small amount of it in the old, traditional way: fermented in open vats, aged in the big barrels that are still made by an onsite cooperage, and cooled by the natural temperature of the earth. They do that to make sure the beer made the modern way tastes the same as the old school stuff.

And there I was, in the very birthplace of pilsner, drinking fresh-as-life beer tapped directly from those barrels, with none other than the Pilsner Urquell brewmaster, a huge blond bear of a man named Vaclav Berka. It was cool, deliciously zingy with Saaz hop aroma and bitterness, and fantastically fresh.

The second moment was in mid-October. It was my son’s 21st birthday, and I managed to get him to hold off having a drink until 4:30 in the afternoon. That was when we went to a Pilsner Urquell event (at City Tap House), and my son’s first legal beer was a Pilsner Urquell, tapped and handed to him by a huge blond bear of a man . . . named Vaclav Berka. I got the next one, and it was cool, deliciously zingy with Saaz hop aroma and bitterness, and fantastically fresh.... 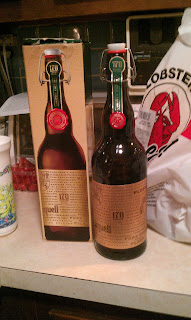 And you can read the rest of that story here. It's a trade journal piece, but a good piece. And I have a follow-up, too. Yesterday I picked up a liter of unpasteurized Pilsner Urquell in the beautiful bottle you see to the left. I got it from the people at Muller Beverage, who told me it was one of only 60 in the country (edit: Ahhh...no. It was actually one of 60 that Muller got, which is quite a bit different! I was moving fast, and it was a simple misunderstanding. My apologies to all). They also told me I should drink it right away, because it had been held up in shipping because of Hurricane Sandy (that bastard).

So I did. I picked up some lobsters at a local supermarket (I'd say where and give them a plug, but they sold me a piece of bad bluefish at the same time, so screw 'em), got some barbecue mushrooms at the farmer's market, and went home to Cathy and Thomas. I popped open the liter, poured it into two beautiful Pilsner glasses I got at the Grey Lodge some years back and cherish, and Thomas's mug (which you see in Vaclav's big hand above), and we drank that sweet thing... And we all said, hey, that's pretty good! And it was. I hope the whole Express Shipped Cold thing works out, because then we'll see more of this kind of thing, and it won't just be lucky journalists and bar owners who get this delicious stuff.
Posted by Lew Bryson at 19:51 10 comments: