Just got news confirming the rumors that Victory will be opening a second brewpub in Kennett Square "in the 2nd quarter of 2014." That's in addition to the large second production facility scheduled to open this fall in Parkesburg, PA. Here's the press release:


Victory in Kennett: Downingtown–based Brewery Announces Second Brewpub Location in Kennett Square, Pa
DOWNINGTOWN, PA – Victory® Brewing Company (Victory) is pleased to announce that it will extend its craft beer experience in Chester County, signing a lease with Kennett Square Realty and committing to develop an upscale brewpub, with on-premise brewing and a takeout beer component, in Kennett Square, Pa.
“The announcement is a culmination of nearly a year’s worth of planning and effort, and we couldn’t be more excited than we are today to finally confirm for our excited fans, who have been asking, that yes we are in fact headed to Kennett!” said Matthew Krueger, Vice President of Retail Operations.
The nation’s 26th largest craft brewery, Victory’s second brewpub location will occupy all 8,234 square feet of the bottom floor of a four-story, luxury apartment building in Kennett Realty Group’s latest upscale townhome, apartment and retail community, Magnolia Place.  Kennett Realty is owned and operated by the Pia Group, who also own Kaolin Mushroom Farms Inc. and South Mill Mushroom Sales.
“We could not have found a better partner than the Pia family, a group that shared—and are now helping us realize—our vision to bring Victory to Kennett,” Krueger continued, a sentiment echoed by Mike Pia, Jr., developer with the Kennett Realty Group.
“Victory’s mission to provide high quality food, a family-friendly environment, and of course, delicious craft beer, all with a focus on community, ethics and environmental stewardship, made them an ideal partner for this project,” said Pia.  “We’re looking forward to the exceptional experience they’ll bring to the community of Magnolia Place and the greater Kennett Square area.”
Called Victory at Magnolia, the location will accommodate a 250-seat restaurant with space for outdoor dining, and boast a chef inspired menu, featuring some of the company’s signature dishes, including their Hand Tossed Pretzel and Wings of Victory.  The space also will be equipped with a five-barrel brew house to keep new, site-specific brews—along with Victory’s existing lineup of world-class ales and lagers—flowing.
Victory at Magnolia is targeted to open in the second quarter, 2014.  The brewery also is finishing construction on its second production brewery in Parkesburg, Pa., expected to be operational this fall.
Posted by Lew Bryson at 10:30 2 comments: 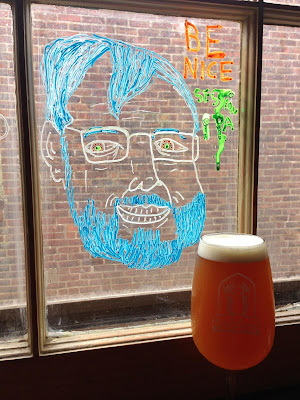 (A rare cross-posting from The Session Beer Project blog; been doing a lot more posting there these days, you should have a look.)
Posted by Lew Bryson at 12:28 No comments:

Very sad to have to pass this along from Mark Brown at Buffalo Trace/Sazerac.


July 16, 2013
Dear Friends,
It is with a very heavy heart that I share with you that our beloved Master Distiller Emeritus Elmer T. Lee, 93, passed away today, July 16, 2013 after a short illness.
In the world of making really fine whiskey the role of Master Distiller is pivotal, but Elmer's meaning to those he met, came to know, and worked with closely extended far beyond that of a Master Distiller. Elmer defined, in the simplest terms, what it means to be a great American - hard working, self-made, courageous, honest, kind, humble, and humorous.
Elmer was born in 1919 on a tobacco farm near Peaks Mill in Franklin County, Ky. He graduated from Frankfort County High School in 1936 and worked for Jarman Shoe Company until December 1941. He then served with the U.S. Army Air Force in World War II as a radar bombardier on a B-29. After flying missions against Japan through 1945, Elmer was honorably discharged in January 1946. He returned home and studied engineering at the University of Kentucky, where he graduated with honors in 1949.
In September 1949 Elmer began working in the engineering department of the George T. Stagg Distillery in Frankfort. In 1966, Elmer was promoted to plant superintendent, responsible for all plant operations and reporting to the plant manager. 1n 1969, he became plant manager.
But it was in 1984 that Elmer's contribution to the bourbon industry gained him the most notoriety, when he introduced Blanton's, the world's first Single Barrel Bourbon.  Elmer retired in 1985 but continued to serve as an ambassador for Buffalo Trace, and in 1986 he was honored with his very own single barrel bourbon, Elmer T. Lee. Of course, for those of us who knew Elmer, he never really retired. Every Tuesday we could see Elmer making his rounds at the Distillery in his trademark cap, signing bottles, posters, and other memorabilia at the Gift Shop, visiting his friends in Blanton's Bottling Hall, and tasting bourbons (for quality control purposes!) in the lab.
Elmer was always ready to offer advice, and was a wealth of information that many of us relied on, myself included. Harlen Wheatley would inquire with Elmer when stuck on a mechanical problem, and any historical questions about the Distillery always went to Elmer, who, with his razor sharp memory, could invariably answer.  To all of us, Elmer was a friend, a mentor, and a trusted advisor.
Elmer was known through the bourbon industry for his expertise and knowledge about bourbon whiskey and he received numerous awards and recognition, including induction into the Bourbon Hall of Fame in 2001, the Lifetime Achievement Award from Whisky Advocate in 2002, and the Lifetime Achievement Award and Hall of Fame induction from Whisky Magazine in 2012.
We have lost a wonderful friend today, and he will be missed terribly.
Services for Elmer T. Lee are pending and will be announced shortly.
Sincerely,
Mark Brown
Posted by Lew Bryson at 10:21 1 comment: