Talk "whisky movie" and people turn blank. Maybe Thunder Road, or if they're Scottish, Whisky Galore, or if you're a real film fanatic, the Uruguayan Whisky (which is not actually about whisky...) but whisky has not been a popular topic for films.

Which is why The Angel's Share is such a delight for a whisky drinker. Usually it takes a few failures for filmmakers to get the feel of a genre right (look at how many dopey tries they took at Batman before Heath Ledger licked his lips to perfection), but this? Bang, first pour, right out of the bottle. There's a real distillery (three of them, actually: Balblair, Deanston, and Glengoyne), real whiskies (Robbie, the main character, guesses Glenfarclas on a blind tasting; it's a Cragganmore), real tasting (nosing, Glencairn glasses, picking apart aroma/flavor notes), and a real whisky expert, Charlie MacLean, who does a great job in a supporting role as "Rory McAlister", essentially playing his own affable, greatly knowledgeable self. But the whisky star of the movie is a cask of Malt Mill, a real unicorn of whisky, from an Islay distillery that closed in 1962 and was never bottled as a single malt. If there's anything that would open the eyes of a whisky fancier...that's it.

So, that's the whisky part, which is well-done. The film part that kept my family watching through our preview is a gritty tale of redemption through whisky...and crime. Robbie (Paul Brannigan) is a Glasgow scrapper, a vicious street thug, to be honest, but he's charmed Leonie (Siobhan Reilly), a gentler girl who manages to hold him through her pregnancy and presents him with a son. But even in the hospital, he's jumped by old enemies who seem determined to drag him back into the pit with them. He runs, and evades them, and returns to his 300 hours of public service to pay off his crimes.

That's where he's met Harry (John Henshaw), the work trainer who sees the best in his charges. Harry's patience and love for Scotch whisky eventually leads to a weekend trip for Paul and three of his public service mates (Rhino, Albert, and the light-fingered Mo) to visit Deanston distillery for a tour. Robbie discovers he has a nose, and a growing love for the the best of whisky. Harry takes him on, and they go to a tasting hosted by Rory, where the plot suddenly develops: the cask of Malt Mill is to be auctioned off, and Robbie hatches a plot to steal enough to give he and his friends enough to get out of the pit.

The ensuing caper is grueling (imagine walking miles in a kilt when you're not...pre-chafed), funny (the French tourist letting the young Scotsman know his kilt's on backwards), disgusting (whisky decanted into Irn Bru bottles), and expanding (as the urban Scots encounter the Highlands). But it is Robbie's path to adult responsibility, and his growth into a serious, sober father is charming.

The scenery in the film is great, the whisky chat is spot-on. The rage and violence in the beginning is shocking (there's a lot of f-bombing, but it wears off quickly), but Robbie's grief when confronted by the results of what he's done is genuine; he's been shocked too. He wants to change, to be a father to his son, a man for his new family...and whisky gives him the opportunity. Worth a look.

The Angel's Share won the 2012 Cannes Film Festival Jury Prize. It was directed by Ken Loach (The Wind That Shakes the Barley). And it opens in Philadelphia today, at the Ritz Five.
Posted by Lew Bryson at 08:51 4 comments: 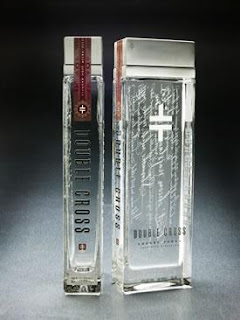 I'll quote myself again about vodka: "To call this protean liquor “colorless, odorless, and tasteless” sells it terribly short." I was a serious -- i.e., straight -- vodka drinker years before I got serious about whiskey, and I've been rediscovering the good points of vodka lately.

Like this bottle of Double Cross I was sent a couple years ago when I was working on a vodka story for Mass Beverage Business. It sat on my shelf -- I wasn't reviewing vodkas, just writing about them -- until a few weeks ago, when Cathy and I took her brother Curt out to Uzbekistan (which is just great, BTW, and if you haven't been, go). It's BYO, so we got together a clutch of beers and ciders and two bottles of wine (the chardonnay worked really well; the sauvignon blanc, not so much), and I saw the bottle of Double Cross, and thought, hell, why not? And stuffed it in the freezer around noon to get chilled for the evening.

We started eating. First it was achik-chuck, a delicious traditional tomato salad. Salud! Curt and I had half-ounce shots of vodka. Then the piping hot bread came. Salud! Then some skewers of lamb. Salud! We finished the skewers of lamb. Salud! Cathy's stroganoff came. Salud! Cathy joined us for a shot. Salud! We got pilov -- Salud! -- and more skewers. Salud! We eventually Salud!-ed our way through half the bottle, and Cathy drove home.

And you know? The Double Cross was brilliant. From the very first shot, it was clean, no trace of any nasty solvent flavors; it was well-bodied without being sweet; and it had a faint but distinct graininess to it that was just perfect. Best of all, the little half-ounce shots made an excellent palate refresher between courses. I liked the Double Cross, and after another meal at Uzbekistan, I intend to buy another bottle.
Posted by Lew Bryson at 12:35 4 comments:

Yet another beer extravaganza I'm really sorry to be missing -- mainly because it's in Pittsburgh -- starts tomorrow: Friday April 19 is the start of Pittsburgh Craft Beer Week. Philadelphia may have started this (or maybe not; Philly Beer Week started from a wholly internal idea, but Ohio Brew Week appears to be at least two years older...but whatever), but the idea of two Beer Weeks at either end of the state is pretty damned cool.

Here's the schedule, and here's an article by beer-lovin' Bob Batz about five fantastic collaboration beers brewed for the event. They've got their own superhero, a beer barge tour, and if I know this town, more great fun than you can shake a tap at. Sorry I didn't say anything earlier, but...really, what were you doing this weekend? Go to Pittsburgh!
Posted by Lew Bryson at 09:31 No comments:

It should come to a surprise to no one, but sales tracking company GuestMetrics has released a report showing that IPA kicked ass and took names last year. According to their database (from POS systems in restaurants and bars), IPA showed stronger growth than any other type of beer last year: an amazing 39% year on year. And it's accelerating going into the second quarter of 2013; 1Q 2013 showed 40% growth.

Meanwhile, the flipside -- which might have sent craft beer geeks into spins of delight five years ago, but now only evokes a "damn straight" nod and grin -- is that "pale lager" is sucking wind.

"Pale Lagers saw unit sales contract by 5% in 2012 compared to the prior year, and as a result, experienced by far the largest share loss at about 170 basis points in 2012," said Peter Reidhead, VP of Strategy and Insights at GuestMetrics.  "Additionally, in analyzing the quarter of 2013, the picture does not appear to be improving for Pale Lagers, with units contracting 6.2% against prior year, and the share loss accelerating slightly to 180 basis points."  Based on data from GuestMetrics, the Pale Lager brands with the largest share loss last year were Miller Lite, Bud Light, and Budweiser."

Just look at craft beer branding these days: it's all about different kinds of IPAs! We have black, double, session, rye, red, green, wheat, and white IPAs, and you can bet I missed some that a brewer is concocting even now. Brewers see that putting "IPA" on your label is like rubbing money on it; hops are crack, like Dogfish Head said about 90 Minute IPA, that's the sickness and the cure!