Gearing up for the second annual Philly Bierfest on February 23rd (1-5), and I'm starting to get a lager Stiffe. The German Society of Philadelphia is hosting the event, along with Brauhaus Schmitz and the Philly Roller Girls (that's right: women-owned and operated roller derby!).

You know I love me some smooth, cold-matured lager loveliness, and there's no place like Pennsylvania to get great fresh examples; er, outside of Germany, that is! For your $45 ticket (or $60 VIP), you'll get lagers and weizens from fantastic Pennsylvania breweries like this:


Meanwhile, down in the Ratskellar, the beer-loving folks from The Foodery will be pouring beers from German breweries like Ayinger, Jever, Trauenstein, and a number of smaller, less-familiar (and delish) brewers, including one possible surprise they're still working on; keep your fingers crossed that this famous doublebock makes it in!

Why am I plugging this? What, a guy can't like lagers? Okay, okay: I'm plugging it because I'm in it, a member of the Brewer’s Discussion Panel on ‘Lager-Love and the Resurgence of Session Styles’ (I swear, I had nothing to do with the title!) at 4 pm in the Society's historic Horner Memorial Library.

Other members of the panel? Artie Tafoya, of Appalachian Brewing (and a past-master of hefe-brewing), Bill Covaleski of Victory Brewing (where they've been known to brew a lager or ten), and German beer importer Lars Dahlhaus. It's moderated by Marnie Old, Philly's best-known sommelier...who is also a fierce proponent of beers, especially lagers. We'll have a few good things to talk about.

I hope you can remember to come hear us, after three hours of lager, weissbier, great German eats from Brauhaus Schmitz (snacks for freesies, more substantial -- and the Germans do know "substantial" -- eats for additional bucks), and the bluegrass picking of the Keystone Mountain Boys.

What do you get for that extra $15 for the VIP ticket? You get a bigger cup...and if that's not enough, you also get in at noon for a tutored tasting on German beer styles by Marnie. Trust me, there are more German beer styles than most people know. It's more than just light lager/dark lager/strong lager/wheat!

Oh, and the Roller Girls. Don't you worry about them, you'll understand that soon enough. So...check it out here, and I'll see you there!

Joe Sixpack puts me in the Wayback Machine


Orkney Skull Splitter is making a big deal about sending Philly it's "first" U.S. draft ever. Its supposed debut is next Thursday (1/24) at P.O.P.E. (South Philly). I coulda sworn I'd had it on draft before, so I checked my notes and found that Jim Anderson, the former Philly beer entrepreneur, served a cask of it at his appropriately named Split Thy Skull barleywine fest 12 years ago... Just for kicks, check out what else was on tap at Sugar Mom's (Old City) on April 14, 2001:

Things change...but they remain the same, too. Great beers in this town. Great beer people. And yes...Split Thy Skull XVII is on for March 30 (as always, the day before Easter, from which stems my long-running habit of having a few very strong beers before singing the Easter Vigil mass) at Tattooed Mom's. Haven't been in a while; maybe it's time to take up that cross again. Thanks for the wake-up call, Don! 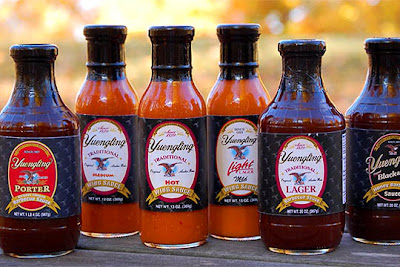 Can't believe this took so long: Yuengling has launched a line of Barbecue and Wing sauces incorporating their beers: Lager, Light Lager, Porter, and Black and Tan. Check it out here. This should be a runaway success.