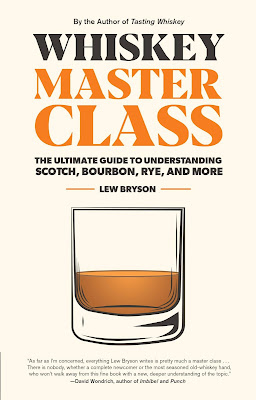 What's a new book without a tour?
I dunno, because I won't have a tour, just a bunch of events!
I'll try to keep this up to date, and you try to come see me and buy a book! Or five books!

Saturday February 29, 1 pm to 3:00 pm I'll be at Julio's Liquors for GO! Whisk(e)y, in Westborough, MA and then back for the evening session. Click on the Julio's link: this is a ticketed Julio's event (and it's serious, you want to go).
Sunday March 1, 1-4 pm I'm back at Julio's Liquors for the Sunday session.

Thursday, March 12 -- 7-9 pm -- We're going to be tasting some rare whiskeys and signing some hot book at The Avenue Pub in New Orleans! If you're in town for the Bourbon Festival, do come join us: some great whiskey's going to pour!

Friday/Saturday March 13/14 -- 8-11pm -- I'll be signing books at the general tasting session of the New Orleans Bourbon Festival. Come see me! THIS IS A TICKETED EVENT! Click the link for information on tickets.
Saturday March 14 -- 1-2 -- ticketed seminar at the New Orleans Bourbon Festival featuring Marty Duffy (former Master of Whisky, and NA rep for the Glencairn Glass), Tom Johnson (president, the Aroma Academy), and my charming self: I'll be signing books afterward.

Sunday March 15: 2 – 4 pm – Signing and sampling event at Easton Public Market with 8 Oaks Distillery (I'll be driving there directly from my flight home from NOLA.)

Thursday, March 26 – Back in Chicago: Signing at Binny's World of Whiskey events (Trade show is 2-4; general show is 5-8: THESE ARE TICKETED EVENTS, and sell out quickly, so see the Binny's site to get tickets ahead of time) Marcey Street location

Friday, March 27 – 2 - 3:30 pm -- Recording with the Key in the Lake podcast at Begyle Brewing, Chicago (plenty of opportunity to stop by, listen in, buy a book, and maybe join me for a beer at Laschet's Inn afterward)

Saturday, March 28 – 4-ish (whenever I get in from Chicago) to 6 -- a VERY informal signing at East End Brewing, Pittsburgh (Relax, drop anchor, get a beer, talk whiskey).
7 – 9 Dinner w/Pittsburgh Whiskey Friends

Friday April 3 – 5:30-9 pm signing at the AmericanWhiskey Convention, Philadelphia Independence Seaport Museum THIS IS A TICKETED EVENT; click on the link to see about tickets.

21-25 April Tuesday - Saturday POSSIBLE New England book tour? If you've got a venue anywhere in New England and would like to host me for an event, give me a shout ASAP!

Sunday February 23 2 – 4:00 pm Official Book Launch at Bluebird in the Bourse, Independence Mall, Philadelphia. We'll have special cocktails, a talk about whiskey, and -- we think -- a special deal if you buy the book and a bottle of Bluebird's delicious American Wheat Whiskey.

Gah, I'm out of town for the F&M event. We'd love to have you come visit our distillery in Hyattsville, and an independent bookstore next door to us (also F&M alumni-owned, like us!) would love to do an event, if you're up for it.

Hey, Jeff! Please ask the bookstore to contact me! The F&M event is 2-4; there's time on either side for a bookstore signing. And I'll definitely be back in the area; I'll give a shout, and we can set something up at the distillery. Thanks!

Madison FB event does not mention any cost. Will there be a tasting? How much for the event? The book?

There is no charge for the events unless otherwise noted. The list price of the book is $27.

Oh, and yes, we'll be tasting.