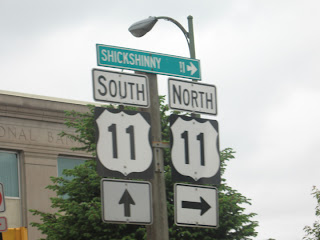 Guy Hagner continues to slouch towards the birth of his rough beast of a brewery, One Guy Brewing, in Berwick, PA. My son Thomas and I went up last year to help with demolition; last week I took my daughter Nora along for a day of painting.

As you can tell by the road signs Nora snapped a picture of (I forgot my camera; thank God one of us had some journalistic reflexes), we were pretty far upstate. It was a nice drive; we came up through Doylestown (breakfast at the Cross Keys Diner!), grabbed a big coffee to go at the Yum Yum Bake Shop in Quakertown, and then ran Rt. 309 north to Hazleton (neat drive over hills and through woods), where we caught SR 93 over the ridge to Berwick. Another big coffee at Dunkin Donuts (couldn't find a local place, sue me!), and we pulled into the future home of One Guy Brewing. 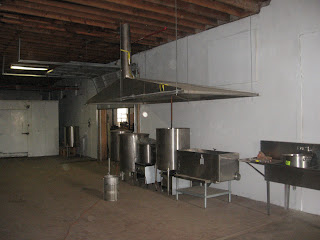 And this is the future heart of One Guy Brewing, the tiny stainless heart of a tiny brewing enterprise. Guy described it as a "lot of scaled-up homebrewing techniques," including a mash-tun that doesn't have a false bottom: it has a number of copper pipes in the bottom that have slits cut in them to strain the mash. It's going to be tiny, labor-intensive, and totally manually-controlled (or in microbrewery-speak, intimate, hand-crafted and artisanally-made). 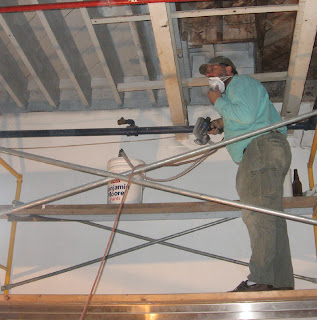 The plan: a number of beers, leaning towards the lager and session end, but mostly whatever he wants to do. There will be room for about 35 people in the tasting room/bar, but he won't be open late or often: he's mostly looking for growler and bottle sales (he'd do kegs, but they've gotten wicked expensive). Bottles? Yeah, he's got a bunch of really cool old returnable bottles from gone-under local breweries and soda companies, and the plan is to get the whole returnable bottle idea rolling again: clean 'em, sell 'em locally (with a fairly chunky deposit), drink 'em, return 'em.

In the meantime, we painted. Nora painted the door between the brewroom and the taproom, I worked up on the scaffold with a Wagner power sprayer, giving the over head a once-over. It took forever, and we didn't get much done. Guy did some more later in the week, but he told me that a friend then came by with a serious power sprayer and did the whole thing in about two hours. The beauty of the proper tool! 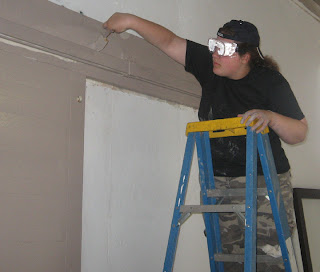 When does he open? Well, there's not a lot left to be done, work-wise. There's still some painting left to do, and the bar has to be put in and the hot dog cooker rigged up (that's your whole menu, folks). The main entrance needs to be cut and the door put in, two current entranceways need to be walled up (for licensing requirements), and the bathroom needs to go in. But mostly he's waiting on approvals from the PLCB (which actually seem to be moving pretty quickly), PA Dept. of Agriculture (food-service), and the ATTTB (the feds, successor to the ATF). Wait and see.
Posted by Lew Bryson at 10:00

I told you so!

Lew: Thanks again for the help, and for the kind words.

Looking good, Guy! Nice to see Lew do some real work for a change!
Is that an open fermenter in that pic or is that the mash tun? Or am I totally turned around!? Good luck! Send samples!

Guy, you're more than welcome, glad to help.

Okie, I knew somebody'd say it! And yeah, that's the mash tun. The fermenters are all closed (and on wheels, too, you oughta see this damned thing).