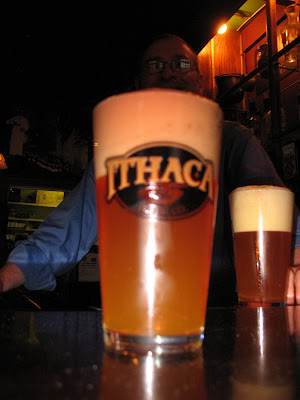 I've been drinking Ithaca Beer Company beers since before I started the research for New York Breweries, back in 2001. They started off with some fairly standard offerings, including the Apricot Wheat that's their best-seller (approximately 45% of total sales), but they've turned it up; Flower Power IPA is a blossoming beauty of hop flavor and aroma (and way too drinkable at 8% ABV), and their Excelsior series is awesome: White Gold, a slightly funky ("Ithaca wild yeast," executive brewer Jeff O'Neil told me, from a small pilot batch that was being carefully blended in) big spiced wheat ale; Caffeinator, a coffee doppelbock; and TEN, a massively whomped-up version of their Cascazilla red ale that took first place at the TAPNY festival tasting this year, propelling Ithaca into the New York State championship, winning the F.X. Matt Memorial Cup.

So it's not surprising that after a successful foray into the hot beer market of Pittsburgh, Ithaca decided to test the waters in Philly. They launched Tuesday night at McGillin's Olde Ale House, and I drove down to Standard Tap, unloaded my bike (free parking in NoLibs, baby), and rode down to have a taste. I was sweating in the 97° heat, but you know, there were a lot more bikes on the streets than the last time I did this. Interesting.

Anyway, it was cool in McGillin's, and though I was early, Jeff was good enough to hammer home the tap in a pin of Flower Power. It was a beautiful pour, a healthy billowing flower of foam over a cool apricot-hued beer. The aroma was mighty and wonderful, hop-twisted and estery, and deep under it was a beer that was West Coast-hoppy but East Coast-balanced. "I'm not so much on bitter," said O'Neil, "but I love hop flavor. Sorry it's not as "session" as you'd like, though." I managed to choke it down, quite quickly, and ask for a half-glass more.

I asked owner Dan Mitchell, why Philly? "We've done very well in Pittsburgh," he said. "We started talking to people (wholesalers) in Philly about two months ago...the guys at Penn (Distributers) seemed to get our beer the best." That's who they went with, and Penn was out in force at this launch. Dan was particularly impressed by the way Philly folks already were aware of Ithaca's beers, thanks largely to beer-trading efforts engendered by beer websites.

The market's ready to show some love to Ithaca's bigger beers, it appears, and we'll be getting regular -- small, but regular -- shipments of cask ale as well, starting with another pin of Flower Power and an Oak-aged Nut Brown (that Jeff says is spectacular) that will be at Friday the Firkinteenth tomorrow (only one in 2008, weather's looking good, whoo-hoo!!!).

I think that Ithaca may actually find a solid market for the Apricot here as well. Philly is well-known as a hot-spot for Belgian-type beers, and a love for lagers, but we don't have a regular fruit beer...and I don't think it's because there's not a market for it. I just think no one's offered it year-round. Apricot may go big here, in which case I suspect you'll see some local brewers bending to the buck and sniffing around the fruit. Could happen.

Anyway, I thanked Dan and Jeff for coming down and for the invite to the launch, strapped on my Camelbak (with two Excelsior bottles stuffed in there, Old Habit Rye and TEN, thanks again, guys!) and helmet, saddled up and headed north, eyeing the ominous clouds. They weren't quite ominous enough to stop me from nipping into Standard Tap for a quick cold pint of Kenzinger (and it was quick, I'm telling you, after that hot ride; it barely touched the sides on the way down) before strapping the bike to the back of the Passat and heading home. I beat the rain by about ten minutes.
Posted by Lew Bryson at 08:06

Any word on Ithaca distribution? On tap only? bottles? Looking forward to trying the Flower Power and Nut brown tomorrow at the Grey Lodge. Got the day off work, got the designated driver in place, and ready for the one firkenteenth this year.

Thats a great style of driving into NLs, then biking! Much easier, more fun, and healthier. Plus it gives you a little time between beer and car, which is always a good thing. I'll have to follow your path and head down to try some of those Ithaca beers!

As impressive as Ithaca has been for years now I was completely blown away when I tried their Pils recently. Beautiful Czech rendition. I'm sure you've partaked en masse already? If not...it's high horse time.

BTW, great reads in Jay's thread. Such a tragic loss.

When I think of fruit beers I've seen in Philly on draft, two come to mind, Lindemans Framboise and Magic Hat #9. I'm looking forward to trying all their beers, Thanks.

Hey Lew, were you at last years Firkinteenth. Check out the video.
http://www.jchtv.com/?p=61

So I'm not trying to be a nudge here. I love your column, love your books, love beer, love biking, and love driving. But isn't it kinda bad form to say you've drank one fast enough not to touch the sides and then hopped in the car? Not setting a good example for those with less experience at this sort of thing.

Seth,
Would it have been better if I took ten minutes to drink it? There are a lot of downsides to being as big as I am, but one of the upsides is larger tolerance. I don't talk about it often, but...there it is.
Point taken: responsible drinking is a good thing. That's why I carry a breathalyzer with me in the car.