Just got back from a fantastic book signing, beer drinking, brewery touring, 'Burgh loving tour of western PA. It started quietly enough when I left home Friday afternoon, headed for Mechanicsburg to pick up more books at Stackpole for the trip...when I hit a pothole on an exit ramp and popped a tire. Damn! Unpack the Jetta to get at the spare, read the manual to see the jackpoints (first flat in this car), jack it, spin it, lower it, repack, wipe off hands, and get back on the road, 20 minutes behind. No worries, they're still there waiting, and I stuffed 200 copies of Pennsylvania Breweries in the back.

I was still early to meet bro-in-law Carl (in town for a conference), so I zipped over to Tröegs to pick up a quick Pale Ale while visiting hours were still open. Said hi to Chris Trogner and publicity mahoff Ed Yashinsky, and then ran off to pick up Carl. We were early for Cathy and Nora's arrival at Appalachian for dinner, so we headed to Bricco to suck up some dollar oysters (Blue Points, yummy) and some drafts ($6 for a 10 oz. Guinness? Really? (Yeah, really, I have the receipt.) You ought to warn a customer on a price like that, grumpy old bartender). Then we did go for dinner, and I got that awesome pulled pork again, and had a cask Trail Blaze Brown (not so hot, just kinda bland) and a Broad Street Barleywine (quite a different proposition: rippling-smooth strong malt beauty). Bye-bye to the girls...and I hijacked Carl to Carlisle. Seemed appropriate. 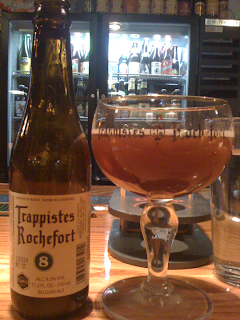 We went to Cafe Bruges, where I started with a Rochefort 8 (note the appropriate glass!) and Carl got a Bavik. The smell of Belgian waffles was about driving us crazy, one of quite a few good things about this place. The others? A very nice selection of Belgian beers for such a relatively small town, an authentic offering of Belgian foods, and the stuff actually coming out of the kitchen looked and smelled excellent. And the very enthusiastically-beer loving women at the end of the bar were kinda fun, too. After a while we went over to Market Cross, where I would have had the Excaliber imperial stout on cask (!!!), only we saw that this year's Sierra Nevada Celebration was on, so we grabbed a couple of those, chatted with the waitress (always a fun crew at Market Cross), and headed back to Harrisburg. Carl graciously had offered to let me sleep in his room to make the next morning's drive shorter.

Because I had to head out at 8:30 to make an 11 AM signing at Otto's. After a quick bowl of oatmeal, I rolled up the Susquehanna on a beautiful morning. As many folks would comment on this trip, I picked a great day to drive across the state: about 50 degrees, bright sunshine, blue skies, and the last of the fall foliage painting the ridges. I remembered there was a tire place up the hill from Otto's, and called ahead; yes, they could do me a new tire while I was signing books! 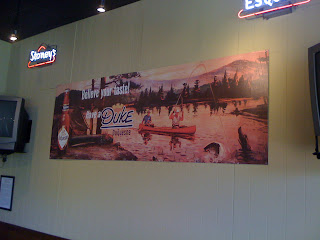 I dropped off the Jetta and co-owner Roger Garthwaite gave me the tour of the new, improved Otto's Pub and Brewery, down the hill in the old Quaker Steak building. It was fantastic (and so much nicer than the QSL set-up). The decor is largely high-rez reproductions of vintage beer art, like the Duquesne poster featured to the left, but there are many more that are just incredible. Did you know there was a brewery in Renovo, PA, for instance? (Guys, be sure to check out the F&S skater chick; she was deemed too racy for the front room!) You'll love this new place.

Beer was, unfortunately, a bit tight. I had plenty of Black Mo stout, for sure, but they had just brewed the last batches at the old site, and were going to be rigging out/in the brewhouse into the new one. There's a tightly calculated amount of beer to make the switch, and if anything hangs up, well...there will be guest beers, right? Because the NEW Otto's location comes with a full liquor license, so they can do that! (It also comes with Chris Brugger, late of Tröegs, who I unfortunately missed seeing, and he knows how to crank it out.) All will be well.

The signing got off to a bit of a slow start, but soon people were pouring in, including my main central PA man, Sam Komlenic, whiskey and beer enthusiast and copy editor for Malt Advocate. Sam brought friends, some of whom I knew by e-mail, like Bill Hiergeist, who's been feeding me info on booze goings-on in PA for years -- and it was great to finally meet you face-to-face, Bill! Eventually, it turned out to be one of my best events ever: 33 books signed, and they were literally chasing me in the parking lot to get one more book! 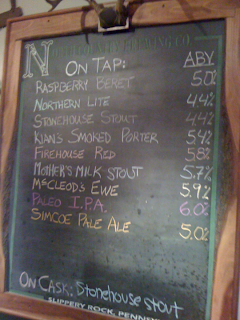 Finally hit the road for Slippery Rock with my new tire. More great scenery across the roof of the state along I-99 and I-80, then slid down into Slippery Rock...and couldn't find parking on the street at North Country. There were people lined up halfway up the block, waiting to get in!

They were not there for me. Duh. North Country does a slamming business, and an hour-and-a-half wait at 4:45 on a Saturday evening is standard for them. No wonder: the food and beer are great, the place is very cool, and it's pretty much the only game in town for miles around. I was just happy to get a small table in the front and sign another 11 books (especially the one for a family whose 11 year old son asked some very perceptive questions; kid's headed for journalism). 44 on the day: a top 10 day for Pennsylvania Breweries!

As you can see by the beer board, North Country doesn't follow the current craft beer trend of "bash 'em with big beers," nor do they slip under the radar with session beers. It's right at the 5-6% middle, and it sells like mad. I stuck to the cask Stonehouse Stout all night, and had a nice bowl of curried vegetable soup and a dinner salad. No, wait, I had the Simcoe Pale, also, and it was beautifully aromatic but not overly bitter: excellent pale ale.

I rang up a Priceline hotel room in Cranberry Township on the iPhone during a slow period, so when things were done, I rolled down I-79 and parked it. Got a little work done, and called it a long, successful day. Tomorrow: the East End Growler Shop, Max's Allegheny, and my vicarious encounter with Four Loko.
Posted by Lew Bryson at 12:34

Looks like you have had a good road trip Lew. Hope you have many more of them in the days to come

Lew; It sounds like you had a real good road trip. Hope that you have many many more.

Hello ...
My name is Ricardo, aui I live in Brazil and I really enjoyed of your posts, I'm adding your blog to my reading list ..
Pass on my blog and leave a comment, craft beer is growing in Brazil for a look of my blog .... link below ...
Ein Prosit !!!

What, no visit to Smithton? I blow smoke in your face...

Another two-week stint without a post. I'm beginning to think you're really as dead as Gabby. I hope not, but there's no evidence to the contrary.

Fear not, Sam K, I've been enjoying lengthy and numerous discourse with Herr Bryson of late.

Good to hear from you, Mr. Scheidt. I was afraid that Mr. Bryson had forsaken us all. Now I'm worried that he's actually one step closer to the afterlife, as I had originally feared. By the way, I loved your 20th Century Ale!