Invasive Species and Beer: a fighting match from Flying Dog 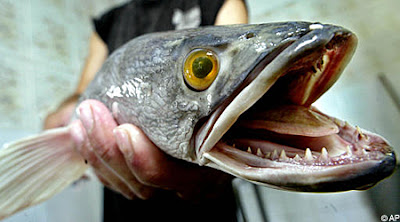 I was raised in Pennsylvania, outside the Blood Line, and while I never hunted (I have no problem with it, it's just not for me), I have fished...and of course, you know I've got a fondness for drinking beer.

So when Flying Dog sent me a press release about a fishing tournament that's all about fishing the invasive Snakeheads out of the Potomac...and then eating the toothy bastards...I was intrigued. So I'm choosing to pass this one on out of the hundreds of press releases I get in a month. Seriously, I mean, can you beat that as an environmental action against an invasive species with no natural predators: becoming its predator, catching it, cooking it, and eating it up with a big mug of Snakedog IPA? Damn, guys, that's ballsy!


In an effort to support the Maryland Department of Natural Resources’ fight against invasive species in the Potomac River watershed, Flying Dog Brewery has signed on to support the 2011 Potomac Snakehead Tournament September 2-3. “We like the idea of hunting and eating fish in the spirit of conservation through eradication. It’s not often you have a species that is so invasive, disruptive, and so widely disliked, and we are excited to be part of this effort to protect the local ecosystems of Maryland and Virginia,” Ben Savage (you just can't make this shit up...), Flying Dog’s VP of Marketing, said.

“Snakeheads are definitely an underrated fish in the kitchen. It’s a flavorful fish that can be served in a number of different ways whether fried, seared, broiled, or baked,” Chad Wells, Executive Chef at Alewife Restaurant in Baltimore, said.Wells will prepare and present a Snakehead tasting along with beer from Flying Dog at the conclusion of the hunt on September 3 from 12:30 to 2:30 pm.

The 2011 Potomac Snakehead Tournament is open to anyone with a valid Maryland or Virginia fishing license. Participants can win cash and prizes for the heaviest fish and overall total weight. Participants can fish hook and line or bow, beginning September 2, 2011 at 6 pm until September 3, 2011 at 12:30 pm anywhere on the tidal Potomac in Maryland or Virginia. Cost to enter is $40 online registration by September 1 or $50 day of the tournament. Official tournament events will take place at Smallwood State Park in Marbury, Maryland. All participants are encouraged to attend the pre-tournament conference at the park September 2 at 5 pm. For full details on the tournament and to register, please visit the WhackfactorOutdoors website

Those snakeheads better watch their ass. Once we get a taste for something, we tend to eat it to death. Just ask the passenger pigeons.
Posted by Lew Bryson at 17:34

No it's not often, but as is certainly the case with possums in New Zealand, the results are often both hilarious and delicious.

"...and then eating the toothy bastards"

That is... if the toothy bastards don't eat you first. Sheeesh! Look at the choppers on that thing!

I've seen a few articles about eating invasive species recently. There was even a conference about it. They wanted to educate chefs to stoke demand.

good stuff, I heard they are quite delicious. It's odd though one man's invasive species is another man's treasure. We worry about fish like Asian carp and snake heads and perhaps rightly so, yet we stocks 100k's of rainbow and brown trout into pennsylvania waters to which they are absolutely invasive and compete with native brook trout and people are completely fine with it.