Got a sample of the latest Parker's Heritage Collection, the Promise of Hope single barrel bottling. 10 years old, 96 proof, top floors of Rickhouse EE (Parker's favorite), no barrel number. And I gotta say...just smelling this after having some Elijah Craig 21 last night (a pretty good night; more on that shortly) reminds me that I just plain like bourbon under 15 years old better than the older stuff everyone's peeing themselves over these days.

If you're expecting tasting notes... I'm minded not to say. Parker told me once that he doesn't understand how people can taste things like mangoes, or leather in whiskey; 'I only put two things in it,' he said, 'corn and oak. I taste corn, and oak.'

Cheers, Parker. I taste corn. And oak. It's just...you made them taste so damned good! 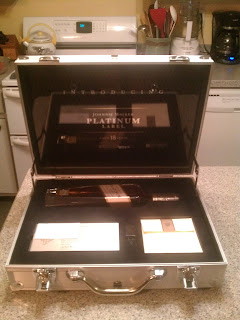 Now, about last night... I got a sample of Johnnie Walker Platinum, too. But they wouldn't ship it to Pennsylvania because of our stoopid liquor laws, so my friend Jim Carlucci agreed to receive it across the river at his home in Trenton, and that's where I went to pick it up, and, you know, have a dram with my man Jim!

I don't usually include schwag shots, but this is just too cool; they sent the bottle (and a flydrive with pix and descriptions, and a coaster) in an aluminum briefcase. Nora's lusting after it, I think.

Platinum is an 18 year old blend, and has a suggested retail of $110...roughly halfway between Black and Blue, so to speak. Jim's not a big Scotch drinker, but he was eager to try it; score one for the metal briefcase and the sharp-looking bottle. I poured two drams. Sherried malt, toffee, fresh fruit pie, and a sophisticatedly reserved smoke. An elegant dram on the palate, as the malt and toffee/fudge comes out more, and that smoke curls around at the back. Could be just the right drink at some moments; probably quite good with cheese and nuts. Only thing is...I kind of have the sneaking suspicion that Platinum is for people who can afford but just don't understand Blue. Maybe I'm wrong, but it tweaks at the back of my mind. Not going to stop me from finishing the dram, though (I've poured another tonight...)

Next we had Grant's Monkey Shoulder, a blend of their three malts: Glenfiddich, Balvenie, and Kininvie. I tweeted on this: "Fruit, spice, baked desserts, dry malt." I'll add that it had a very pleasingly full mouthfeel, a real roll-around-the-palate sensation. An enjoyable dram indeed, and Jim was smacking his lips; hey, maybe I do like Scotch! It's like beer: if you think you don't like it, here, try this...

Then I hit him blindside: Danfields 21, a delicious bottling from Black Velvet that doesn't come to the U.S. market, and man, that's a shame. Luscious, sweet, with a spicy soupçon of rye; when we toured Black Velvet back in June, and went out for dinner with the distillery staff, we tore into doubles of this at dinner, and just loved it. If you see it at Duty Free, get it, or get a Canadian friend to mule some in.

We wound up the night with the Elijah Craig 21 I mentioned above (Barrel 41). I've never been a huge fan of the EC 18 year old; I'm unabashedly in love with the EC 12, and have said so frequently. This 21 year old reminded me why. Good, but...strong oak in the nose, pinching wood on the palate. The broadness of it saves it, but it's not one I'd reach for...like I will for that Parker's Heritage 10 year old. I've gone back to that, and I'm drinking it now. I do like that.
Posted by Lew Bryson at 23:52

I'm a wee bit confused -- did you not do tasting notes for the one out of respect for the preferences of the distiller? Or do you get the need for food descriptors for Scotch whisky, but don't feel they work for others? I was surprised to read all the notes of toffee and fudge and fruit and baked desserts you got out of the Scotch whiskies, but just "corn and oak" from the one bourbon, and not much more for the Canadian whisky and the other bourbon.

It was a happy day for my wallet when I realized I generally liked the base bottlings of many bourbons and whiskies more than I liked the special bottlings! Too much age often means too much wood to the detriment of tasting anything else for me.

Sorry for any confusion, Bill. I did do the corn and oak note out of deep respect and sentiment for Parker, not any special need for further notes for Scotch whisky. I re-tasted the Platinum -- hence the longer notes -- but didn't re-taste the others; just some basic notes there from our casual tasting the night before. I've never been one for lengthy, detailed notes here on the blog anyway.

And I agree with your second statement. VERY happy with basic bottlings of most bourbons, and even more happy with the reasonable prices of ones like the Evan Williams Single Barrel and the Jim Beam Black.

Thanks for the explanation. I was once a big fan/explorer of wine, and I gravitate to aroma/taste descriptors that refer to food and other things when reading wine/beer/booze notes. Sure, such reviews can veer towards parody, but you can and do taste things beyond grape or malt or wood or whatever is actually in there. And if you're looking for guidance, once you get a sense of what a reviewer means, you can trust him or her, and eventually build up understanding to go your own way.

Thanks again, and best wishes,

Bill, I even go so far as to try as many budget bottom-shelf bourbons as I can, where I can. I'm finding outstanding value in a number of them, and those that don't pass the test go great with ginger ale!


They can cry all they want about no Pappy 23...I'll take a DOZEN HANDLES of HHBIB anytime for the same money!

Mine was purchased in May at the Party Source and is absolutely Bottled in Bond...distilled at Bernheim, bottled at Bardstown.

The amazing thing is how different the JTSB and HH are in flavor profile. Makes me proud that the Heaven Hill boys are not just putting the same juice in different bottles.

Sam K, thanks for the tips. I've used Lew's recommendations and Chuck Cowdery's (apologies if I misspelled his name) recommendations over the years, and will definitely try yours. There's a restaurant/bar/BandB in Chicago called Longman & Eagle, and among their many virtues is a list of about 100 or so whiskeys (generally American bourbon) that they offer for $3 a pour (which is quite inexpensive for Chicago!). It's a gift to be able to try stuff without committing to the bottle at an affordable price. Lew, I know you're generally booked solid when you show up for WhiskyFest, but I think you'd love L&E if you could fit it in some time. And obviously, I owe you a beer or dram or twelve for your advice over the years -- if ever our schedules overlap, I'd be happy to start to balance the books!

Actually, Bill, you're not the first person to recommend L&E; I'm thinking maybe I'd better make time to visit next time I'm out. And who knows, maybe that will be one of the times Sam's able to join us!