Selin's Grove Brewing is one of my favorite places; not just favorite brewpub, or favorite bar, but favorite places. It's cozy, it's friendly, the beer and food are exceptional (and the food's largely locally sourced), and it's been that way for years. Which is why I like to be there for their opening-day anniversaries when I can; their anniversary falls on December 21, which is usually the day of the Winter Solstice, making it easy for me to remember. There was one year when I found myself in Harrisburg around 5 PM, finished up with business and wondering where to go...when I realized it was the solstice. Up the river I went!

Just a few weeks ago, I took the day off and headed up the river with three very important women: my mother Ruth, my wife Cathy, and my daughter Nora. We had some Christmas shopping planned, though that would mostly go astray: the shopping in Selinsgrove eluded us. Still, we stopped at Weaver's Market & Bakery in Port Trevorton (thanks again, Carolyn!) and did find some good stuff: whoopie pies, bread, apples, a rug, and some Amish-made sauerkraut that went right into the roaster on New Year's Day. Up the river we went, and soon we were parking above the pub.

Co-owner/brewer Steve Leason was down at the front door, handing out the traditional little gifts handed out on the anniversaries. This year it was a pin in the shape of their running dog logo. We shook hands, talked biz a bit (he assured me that they had no current plans to sell to A-B InBev (nor plans to buy them)), then the ladies and I headed inside.

Have you been to Selin's Grove? It's in the basement of a 200 year old stone house. You enter through the barroom, where you find the fireplace, the small bar, the tiny kitchen (our walk-in closet is bigger), and three other tables. Pass through into the main room, where there are about six other tables. We sat by the window, watching the people come and go outside. 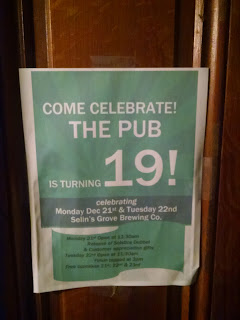 And then, of course, we got beers. I started with a dunkelweizen (I've rarely gone wrong choosing a dunkelweizen), then after a taste of Cathy's choice, followed that up with a Solstice Dubbel. By then we were into dessert, and it was growler time. I got half-gallon jugs of the Dubbel and the Stealth Triple, and a quart 'grunter' of the superb Framboise. The Triple was not overly sweet, and scarily drinkable at just over 9%; the Framboise was densely fruity and delicious.

We had to head home (Nora drove), down the cold Susquehanna valley. But I think I'll be back for the 20th next year; we might have to get a room.

Stealth Tripel is spectacular; thanks for the reminder. Now you've got me thinking road trip.

Sorry I missed you at SGB that day. I would love to meet your mom. Thanks for giving Carolyn a shout out! Glad you enjoyed your visit!

Geez, I hope they haven't gone all belgian

Thanks so much Lew - is was great (as always) to see you - and hear your infectious laugh!
Heather McNabb

So I missed you by a day. Damned work schedules.