I never expected to be doing notes on two German malt whiskies in the first month of the new blog, but here we are. How'd it happen? Fairly simple: we took my son to dinner for his birthday. We went down to Brauhaus Schmitz on South Street in Philly; Thomas said he felt like German food, and that's a great place for it. 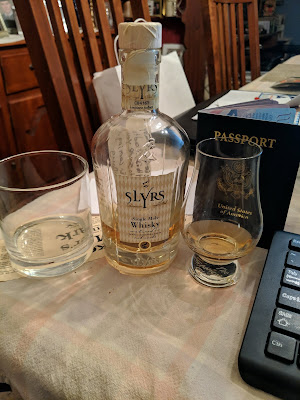 When I'm at Brauhaus, the foremost thing on my mind is beer, and at this time of year, it's Oktoberfest beer, festbier, Märzen! I got a half liter of house Traunstein fest going, and things looked decidedly rosy. Then the owner, Doug Hager, came over to the table. He had a small bottle with him.

As you can see, it was labeled Slyrs Single Malt Whisky. There was also some writing on the masking tape holding the cork in. 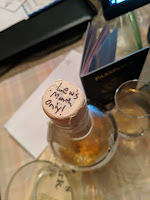 Can you see that? "Lew's Mouth Only!" Doug said it was to help keep from drinking it all himself; the Slyrs is, he said, his favorite (German) whiskey!

I've known Doug for quite a while, ever since he sang a silly little beer song for the judges at the Philly Beer Geek competition ten years ago (just before Brauhaus opened). This was the first time I knew he was a whiskey drinker. Thanks for thinking of me!

Slyrs is a 43% non-age statement bottling, thought to be around five years old. That would be young for Scotch, but Slyrs is aged in new charred American oak barrels, like bourbon, so it ages faster, picking up color and flavor faster. Let's see how that worked out.

There's a fruity, almost Juicy-Fruit gum aroma to it, along with a firm oak spine. It's sweet, grainy-doughy sweet, but there's some prickly spice as well. The mouth is hot for the proof, but the sweet malt and vanilla-oak comes through quickly and puts the heat in the background. Slyrs is young and lively, not a smooth-tempered contemplative dram. The malt is sweet, the fruit is there, but the oak chases it around the mouth, smacking it on the ass with a barrel stave right into the finish, which is oak-dominated and fairly long.

This could use some more age, though how that would go in new oak is a question. Slyrs is energetic and fresh, but it borders on busy, Might want to take a cube with it.

By the way...this whole "single malt" thing gets me a bit peevish. "Single Malt" seems to be aimed at leading one to believe that this whisky is like Scotch, maybe a lot like Scotch. I feel the same way about American "single malt." Distillers tell me it's because it's all malt, made from a single distillery, just like single malt Scotch, but this conveniently overlooks that Scotch came up with "single malt" to differentiate from the much more widely-sold blended whiskies. "Single malt" is Scotch whisky blended from casks of all-malt whisky, all from the same distillery...a distinction different from American and (presumably) German malt whisky distillers, since the Scots do blend from more than one distillery on a regular basis, something American distillers do not, to the best of my knowledge, do except for the very rare collaboration. We'll be talking a LOT more about American single malt whisky this Saturday, Nov. 2 at Julio's Liquors, in Westborough, Mass.: the American Single Malt Symposium, with people from Balcones, Westland, Virginia, and Sons of Liberty distilleries. If you're anywhere near...get a ticket, come on by!

I've got nothing more German coming up, but you never know...
Posted by Lew Bryson at 01:02

I’ll find you something else next time I’m over there....