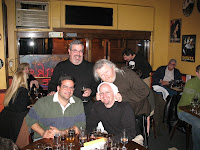 I was at Monk's Cafe last night for their dinner with Tomme Arthur (the guy with the napkin on his head; that's brewery owner Vince Marsaglia to his right; Monk's partners Fergus Carey (with the napkin) and Tom Peters are behind them) and his Lost Abbey beers (which just became available in PA). The dinner was excellent -- as always -- and I'll be reporting on it shortly, either here or there, but that's not why I'm talking now.

While I was standing at the front bar, sipping a glass of La Chouffe, Nodding Head brewer 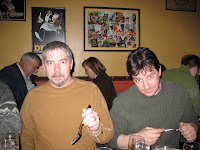 Gordon Grubb grabbed my arm and said, "Saw your new blog. Good, way to go. Thanks. Session beers are the only way we'll ever get more than a tiny fraction of the market." Now, Gordon (pictured at the right, with his cheerful boss, Curt Decker) may be said to be somewhat less than objective, being a brewer of session beers himself. But we all enjoyed the decidedly non-session beers Tomme brought along, and we all know that there is definitely a place for big beers. We just don't want to see session beers left behind, or left out of the love.

I really enjoyed Nodding Head's beers when I was out in Philly this fall.

BPA and Grog, well all their beers really, are quite tasty.