That Wasn't Where I Was

But as Robby Burns said, the best laid schemes...gang aft agley. Not only did we have a disturbing problem with the Passat (lost the turbo for about half an hour, with a severe 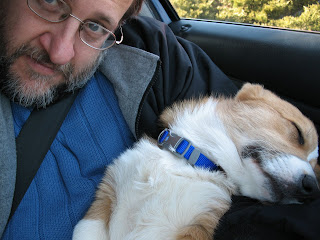 concurrent loss in power; it's fine now, after an Italian Tune-Up (Fun!) I think I had some oil sludge in the turbine casing), well, we got a new puppy.

That's him, fast asleep in my arms outside the Wegman's in Downingtown (so near, and yet so far...). He's a Pembroke Welsh Corgi, about 15 weeks old, very friendly, and just as cute as a box full of buttons. His name is Penderyn, yes, named for the Welsh single malt whisky, but it was my son who pushed for that name; he just liked it. I was pushing for Ci (Welsh for "dog", pronounced key), but I rolled over. (The other picture is my wife Cathy running with Penderyn in our backyard.) 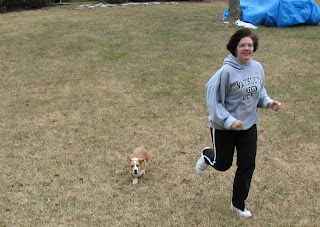 Not a bad reason to miss what I'm sure was a great event.

Congrats on the new family member. Have fun, puppies are a blast!

That's a pretty good reason for missing the best of 2006. I was there from 8-11:30pm and they still had everything on tap that they started at 12. The Chouffe Brooklynette (La Gnomette II) was very good.

Btw, your car broke down in the Wegman's parking lot or somewhere else? If you were stuck there I don't feel that bad for you... Wegman's is the most incredible grocery store/market ever. Did you try some of the cream of crab soup made with Victory beer? The chef of the recipe won't give it up, I asked.

Thanks, Guy! He's sweet as Grade A Dark Amber (just had waffles, and it's on my mind), and well-behaved. Best of all: 15 hours in the house and no accidents, slept the night quietly in his crate. Good dog!

Rebecca,
Glad it was good; I got some of the Brooklynette out here at Isaac Newton's, it was delicious. Really wanted to get one more glass of SN Torpedo, though!

The car didn't really break down, just got real...diesely. I used to drive a diesel back in the 1980s, and it was like that: no acceleration to speak of, died on hills. It crapped out going across the Conowingo Dam on Rt. 1 in Maryland (the breeder was in Maryland farm country, southwest of Oxford).

By the time we got to Wegman's it was running like a champ again. But I agree: good place to get stuck! Have not had the soup; next time, thanks for the tip.

Well, Jack told me yesterday when I was at TDR that you were out with the family on "puppy patrol" and probably would show up late, if you did made it. Great Plan B and beautiful puppy....you look like a very proud poppa.

TDR was great as usual :-) North Coast Brother Thelonious was the only one I had time to taste. Mmmmm...what a good taste it was.

Then it was off with the family to my daughter's basketball game. Family time is grand :-) Congrats on the dog.

That's gotta be the shortest collie I've ever seen. ;-)

(sorry, my standard joke with Corgis)

Hey what a cutie, the puppy I mean..

BTW, there is a Wegman's in Warrington at the intersection of Street Rd. and Rte. 611, it opened a few months ago. My wife and I spend way too much money there on neat stuff (but Wegman's rules) when we visit my folks who live about 5 minutes away from it.

LEW! What a cute puppy! However, as you are well aware, nothing will ever replace Barley!

True, which is why we just couldn't keep the name the breeder was calling Penderyn: Barclay. Too close, too soon. Cathy and I were getting all weepy over Barley Monday yesterday afternoon, and it was group hug time with the kids and the pup. I miss the goofy booger, I do. Big pawprints to fill.

Ok, I grew up near Exton in Paoli and have not lived there sinceI was17, which is a VERY long time ago.And Ilive in upstate NY --land of Wegman's so yourpost came up because I was looking for somestuff on Wegman'sfor a post I am doing soon.How odd to think of how things have changed in PA. Somehow time and geography get mixed up as one ages. Check out my wegman's post some time next week at http://www.cookingwithideas.typepad.com

Hey, bib,
Funnier than you think: we were just up in your area last week. Two of my brothers-in-law are living in Newark, NY; we went up for my niece's first communion. Exton and Paoli have changed a LOT in the past...er...since I graduated from high school. I grew up in eastern Lancaster County, and now live in Bucks; we travel through the area often to visit my parents, stop to see new and old friends in Exton. But I've just started really getting around IN Paoli; not a bad little burg. Two good beer bars, which is better than most places (like Geneva, eh?) are doing.