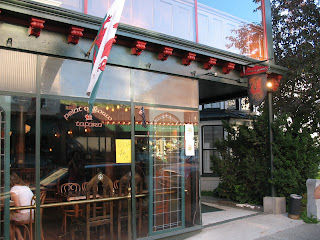 We left on vacation Thursday afternoon; dropped off Penderyn (first time at the kennel: traumatic for all of us) and ran up through NJ to the NY Thruway, across to the Taconic State Parkway, and peeled off just before the Berkshire Spur to go to Chatham, where there's a new brewery, unimaginatively called Chatham Brewing Company. I'd e-mailed the folks there, and learned that their beers were on at a pub in Chatham called the Peint o Gwrw Tafarn ("Pint of Ale"), a Welsh/English-themed place. And that's where we stopped for dinner.

It's a nice little place in a quiet little town, a dark wood bar and dining room, with a kind-of/kind-of-not Brit pub menu: Nora got lasagna, Cathy had a salmonburger, Thomas a burger, and I got fish and chips (real good, quite crunchy crust with moist fish inside). But you know, I didn't pick the place for the food. It was the Chatham beers. They had three -- porter, IPA, and amber -- and I got the porter. It was served too cold, but it warmed up and got real nice: full, dark, a stout-style straddler with roast and dark bitter chocolate notes, and a clean finish. Cathy got the IPA, and it was clean, but clumsy: possessed of a flat, harsh bitterness. But they also had the IPA on cask, and it came across much better: a touch of sour and sulfur in the nose, but opened up quite nicely in the mouth: not quite as blaringly bitter as the push version, some prominent ale-yeast fruitiness, and a clean finish.

All in all, a very nice experience. Chatham's already won a bronze at TAP New York, and I think they've got a good future if they can keep things moving.
Posted by Lew Bryson at 18:51

Thanks for the tip on the Peint o Gwrw. I have been making monthly trips down that way to visit my father and after one stop at The Barrington brewery...well, let's just say I need somewhere else to get decent beer and food.

I will make a point to stop here on my trip this month and check out the Chatham beers. Keegan's website says their beers can be found there as well, did you see any on tap?

Didn't see any Keegan Ales, more's the pity. But it was good eating.