The Session: Music and Memory 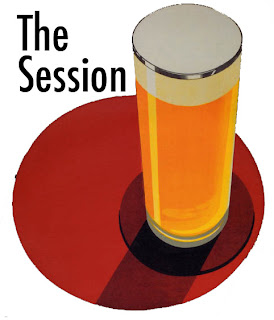 It's time again for The Session, when beer bloggers around the world are invited to write on a similar topic. This month it's "beer and music," suggested and collected by Tomme Arthur, brewer extraordinaire for Port Brewing/Lost Abbey. The collected entries are compiled here.

My very first days of truly discovering beer had a classic soundtrack; appropriate, because I was learning about classic beers. I was introduced to beer out of the mainstream at the Lauzus Hotel, in Lancaster, Pennsylvania, an old hotel bar with a tile mosaic floor, tin ceiling, and a big-hearted old German owner, Wilhelm Lauzus.
Wilhelm's idea of 'how to do it' was a long set of coolers full of beers on the wall opposite the long carved wood bar, a cooler from which you would select a beer, take it up to the bar and hand to him or his barman, a crusty old Dane named Per. Once Wilhelm had the beer -- an Altenmünster, a Maisel, a Sailer, a Duvel -- he would inspect the label, cock an eye at you, open the beer, and hand it to you, always with a comment. Kronenbourg: "Alsatian beer. Really belongs to us." Augustiner Maximator: "Give one of these to your girlfriend, ho ho ho." Pabst: "If you want..." Then would come the beer's price -- and the most expensive beer he carried was $2.50 -- and you would pay -- cash, round by round -- and then have a seat.
I had been drinking for three years when I first walked into Wilhelm's place. Pabst, Genny Cream, Bud, and a lot of Rolling Rock. Oh, and National Bohemian, Rheingold, National Premium, Schmidt's, Duquesne, when we didn't have much money. I drank it because it was cold, it tasted good -- eventually -- and yeah, for the buzz.
Then I wound up at Wilhelm's with an Altenmünster in my hand -- "The fliptop's nice, no?" -- and my world changed, right then.
And the tune playing on the jukebox was "Lili Marlene." Wilhelm had stocked the two right-side rows of the jukebox with beerhall music, swing tunes, and even some short classical pieces. The rest of the juke was the same old crap everyone had, classic rock, pop. But I got used to drinking good beer, great beer, to the oompah sounds of Alte Kameraden ("Old Comrades"), Lili, and the Radetzky March. I would clink glasses with my friends, and grin, and swallow deeply of the great refreshing stuff while the brass blared and the drums thumped. We thought it was great fun in those days, and I still do.
Maybe that's why I still like lagers, because they were my first non-mainstream beers, and maybe that's why I still have a deep love for beerhalls and their traditional tunes. It all comes together sometimes, in a way that makes you hope it will never come apart.
Posted by Lew Bryson at 21:06

Email ThisBlogThis!Share to TwitterShare to FacebookShare to Pinterest
Labels: music, The Session

Where was the Lauzus hotel located? I live in Lancaster city.

Being a Lancaster County boy myself, I have to admit never having heard of this place. Where was it and what happened to it?

The Lauzus Hotel closed in the late 1980s, when Wilhelm died (I drove up from DC for his funeral, and it was nice). It's re-opened as the Blue Star, on West King Street, about a block east of where Columbia Ave. starts. The "Blue Star" name comes from the site's history; it's the location (and part of the buildings) of the old Rieker "Blue Star" Brewery, one of Lancaster's last operating breweries. Still not a bad selection of beers, and I drop in on occasion to relive old times.

Great memory Lew -- reminds me of the German restaurant I frequented every Friday evening for about 5 years straight: Anne's Bavariahaus in Libertyville, IL. Not the same sort of owner, but the tiny bar attracted personalities very much like that of Wilhelm -- and the beer was on similar par.

Thanks for sharing -- now I'm longing to relive old times myself, but that seems like an all too common theme anymore these days!

Beautiful story, Lew. One correction, though: At the time you're presumably talking about, there was no such thing as "classic rock." I believe back then it was simply known as "music."

It was the early 80s, Stephen, and you're probably right; back then it was just 'rock.' There was also some Nat King Cole; "Fascination" played one night when we were there, with some bizarre results.

The Lauzus Hotel closed in the late 1980s, when Wilhelm died (I drove up from DC for his funeral, and it was nice). It's re-opened as the Blue Star, on West King Street, about a block east of where Columbia Ave. starts.

Thanks for the response. I'm pretty familiar with the Blue Star, and in the 11+ years I've lived here, I've seen it cycle through a couple of ownership and identity changes. I don't go there anymore... most of my favorites are outside of the city (Bube's, Shank's, UBW, Stoudt's). Can't wait for Iron Hill.

Seriously...Lancaster City's beer scene wasn't too bad, and then it went to blazes. The last two times I've been to Quips, the beer was sour; I'll go up the hill to the Fulton instead and get a good burger and a Yuengling (back in the day, the Fulton had Sam Smith Pale Ale for $2.25 a bottle). Strawberry Hill's got a nice little selection -- often has Chimay on tap -- but a tiny bar. Lancaster Brewing's good, but it's just one place. Iron Hill will be good, maybe get more people thinking about adding good beer.

The last two times I've been to Quips, the beer was sour; I'll go up the hill to the Fulton instead and get a good burger and a Yuengling...

Quips is disappointingly hit-or-miss, at least regarding craft beer. Their kitchen is still going strong. This past Saturday, they were pouring Spaten Oktoberfest and the ubiquitous-in-Lancaster DFH 60, and both tasted fine to me. I've had trouble with Fuller's ESB there, though. A shame, since they fashion themselves as an English pub.

I'm sad to say that the Fulton has fallen off my list of places to go. It used to be a weekly hangout for a large group of friends, but had a big drop in quality and service after an ownership change maybe 7 years ago.

The American Bar and Grill (a few blocks north of the Fulton, north of the tracks) has improved both its tap selection and menu. Worth a look. Also stop in the bar of the new Lancaster Arts Hotel. Handsome place, no crap on tap. Heavy on Victory beers the last time I was there.

I definitely agree on the Lancaster Arts, 6 taps, all local quality products. For a while, there was McFly's on South Prince. A good sized selection of taps and always something decent. If you ordered a beer and the keg kicked in mid pour, the next thing you knew there was a sixpack and a tee shirt in front of you to take home. the shirt said " I got Blown at McFly's".

It is excellent to hear that others remember Lauzus! I went there a few times when I was an undergrad at F&M. I reallly liked the Berliner Weiss, a Weiss beer with a shot of some kind of berry added. Wilhelm was the consummate barkeep, full of talk and tricks. I remember drinking a Grolsch there and he showed me the trick for knocking the top off with your hand. I fumbled with it a bit until he told me the secret- your thumb flips the catch as your hand hits the top. He had a million of these. There was a Ratskeller in the back he showed to me a few buddies once. I don't remember what the entry looked like, but I had the impression that you almost had to already know it was there to find it. I'm sorry to hear that it was not carried on in the name.

Yes, the Berliner Weiss was very good but my favorite was Augustiner Brau. I too found Lauzus Hotel to be enchanting. I discovered it in the early 80's and frequented it often. It was a discovery that had a profound impression on me. Bill was always with smile and story. He was a boxing coach for the German Olympic boxing team among other pursuits. I'm from Lancaster and never knew of the treasures that this wonderful establishment had hidden inside. Lew's discription fits perfectly.

I was blessed to have known Bill Lauzus for a short time in the early 80s. I rented a room from him in the hotel(walk up...no air conditioning) the year I turned 21. If you you bought a Hotel Lauzus t-shirt, Bill would give you a free draft every time you wore it in the bar! Alas, my shirt wore out quicker than my welcome. Bill was a great man.