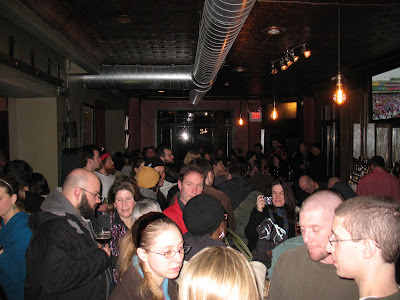 I dropped in to the opening of Local 44 tonight, the new bar from the irrepressibly energetic ("Tigger," I said to Nora yesterday, "that's who he reminds me of: Tigger. He's always bouncing.") Brendan Hartranft and his charming partner Leigh Maida, they of the wonderful Memphis Taproom. Local 44 opened tonight at 5 PM; I got there about 8:00. As you can see by the picture, the place was hopping, wall-to-wall happy beer-drinking people (and yes, the TV's tuned to Penn State's ignominious shellacking in the Rose Bowl, dammit).

I ran into Leigh almost immediately. Has it been like this all night? "Actually, at 5:00, it was empty," she said. "At 5:02 it looked like this, and it's been like that ever since." Still, things were running smoothly. I got my beer (Coniston Bluebird Bitter, and a nice jar of it) right quickly, the bathrooms were clean and functional, and one fellow I talked to (hello, Marvin!) said the food that had come out earlier was very nice. I finished off my beer, made my way out past the happy crowd, and headed home on this cold night. 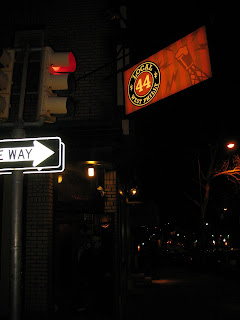 Parking's rough -- it's University City -- and it's a bear to get there from where I am, so I probably won't get here as often as I'd like. That's too bad, because I suspect I'd like to be here often.
Posted by Lew Bryson at 23:13

I'm so happy for Brendan and Leigh. My wife and I ate at Memphis Taproom on New Year's Eve and both of them have so much positive energy for the work they do. Their contribution has really revitalized that corner of Memphis and Cumberland and I wish them the best of luck with Local 44. It looks like they're off to a great start!

In that picture, I can see a man who appears to have put his head on upside down.

Stopped in yesterday afternoon with m'lady for a quick lunch and a few beers. Loved the environment and feel of the place, very simple and comfortable, and lots of nice wood everywhere. (I'm curious if the ceiling in the bar is actual tin, painted over, or just a molded plaster. But I digress...)

The oyster mushroom po'boy was fantastic... too bad ya'll kicked the Blind Pig before I could get some, but in retaliation I kicked the Brawler.
:o)

Can't wait to get back, Local 44 will be a regular stop on my beer travels for sure.

Very impressed with the opening, I got there around 4:50 and as you were told, just after five people started streaming in and never stopped. The food that came out was excellent, the beer is priced well, and Brendan seems like a great guy. A nice addition to West Philly.

What a fabulous place and walking distance from my house. A far cry from the old Murphys Tavern and probably the most crowded since then. It was too crowded and dark to shoot much video but I did get back on Saturday afternoon when it was better lit. Local 44 post here. http://www.jchtv.com/?p=103

Great bar! Looking forward to spending more time there. Thanks for the shout out!

It looks delicious. And innovative. It really does. BUT (point-counterpoint) I miss Kelliann's. As a one-time West Philly local, I happily wasted a lot of my early 20s there, playing pool, complaining about the shitty bathroom, drinking G&Ts, watching the Birds. It will always be Kelliann's to me.
(For more of my thoughts on the matter, check out http://tinyurl.com/84fllb)