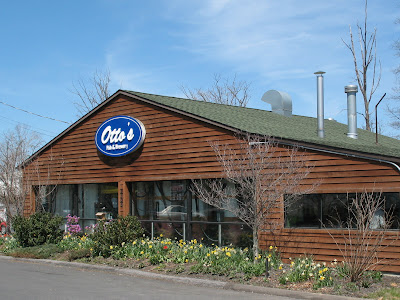 Remember that Pennsylvania news I promised you? Here it is.

Although that's a picture of Otto's in State College, the story's really about Otto's founding partner Charlie Schnable's new projects: the Keewaydin Cider Mill, a production facility for Otto's beers and some small contract runs (including canning for beer and the Keewaydin cider), and -- much further down the line -- maybe a distillery. I'll let Charlie tell you about it.

"The Keewaydin Cider Mill should have cider by late March. I've been focusing on this project for a while and trying to educate myself on cider and its production. It's on a small farm north of Karthaus in the village of Keewaydin (this is just the general area; I don't have an exact location -- Lew). Pretty remote. The state record elk was shot yards from the orchard (a seven by seven, if that means anything to you).

"We have an orchard that has been around for about 70 years and can produce about 7,500 bushels. Right now I have 800 gallons fermenting and 1,500 more to ferment. Equipment consists of one ancient cider press and two new 500 gallon fermenters and two 1,000 gallon storage tanks. Most of the apples aren't the best for cider production as this was a farm cider producer, and dessert and cooking apple trees dominate. So don't expect French quality cider yet. I already have new trees (hopefully Kingston Black - the king of the cider apples) on order for next spring but probably 3 to 5 years until they produce. I think the blend of apples we have will make a fine cider, though.

"It is a refreshingly simple facility compared to brewing, low impact, low energy, and little waste. I've really gotten fond of this idea of producing a product where I can stand in the field and see my fermentables and know where everything came from, plus no cell phone reception. We are getting more and more local based here at Otto's as well and Keewaydin is probably an extension of my feelings towards local emphasis.

"The apple brandy is a bit down the road.

"The production brewery is also down the road, but hopefully construction starts this spring. It's going to be a relatively small facility which will essentially take over Otto's wholesale and contracted beers. Packaging will be in 22oz bombers and 12oz cans. I've talked a bit with Brian O'Reilly and widget cans are out of our reach right now; the producer in Europe has a minimum run of an entire day's production (a whole lot). Maybe once we get up and running the two of us will go together for an order. (I hope so, because I can't wait to get O'Reilly's Stout for home consumption -- Lew again)

"Otto's is coming off of a great year and things still look strong. We are bottling 4 products right now and are contracting labels for Zeno's, Zola, Kclingers and a few more waiting for labels. Doing local products as much as possible, especially in the summer-fall. Did an interesting collaboration with apples and a tripel and it really worked well, makes me wonder about Belgian yeast and cider possibilities.

"My partner says he will start to worry when he sees me pouring apples into the mash tun. Right now it's lots of Tums and honing my time management."

Pretty awesome. I've been waiting for more Pennsylvania ciders. The state ranks fourth in apple production, nationally, and there are some old trees tucked away in farms that produce some old, heritage strain apples; I know, I've eaten some of them.

But the only other cider mill making "hard" cider in Pennsylvania that I know of is Stoney Acres Winery, near Nescopeck (Whoops, they're closed; see comments). So it's good to see someone who already has experience with sanitation, local goods, and sales and marketing of booze getting into this. Needless to say, I can't wait to visit and taste. I have high hopes for this project, and I am, of course, a Pennsylvania chauvinist. Just ask my wife.

Apple (Pennsylvania apples!) photo is by Sue Roberts, at pBase. Thanks to Sam Komlenic for the tip and the connection!
Posted by Lew Bryson at 09:35

Stoney Acres unfortunately has dissapeared due to nasty divorce. Steve at Selins Grove has purchased their final inventory. I heard though that they may restart.

Lew, there's another cider producer under "construction" in south-central Pa.--they have their license, and I've tasted their early production. Stay tuned, and I'll feed you more on it after I file my own stories. Or maybe you could meet up with me during Philly Beer Week (I'm due up for the Craft Beer Fest) and pry it out of me.......

Already on it, Sandy. Things look good in PA, hey?

Nice growth news for a solid brewery - way to keep it local!

Whoops, that's 22 oz. bombers, Scott. Thanks for the catch!

I tasted this stuff yesterday at Otto's - really nice. Unfortunately, you can only buy a bomber to drink at Otto's. I was told the PLCB considers this as a wine, and therefore Otto's cannot sell it for take-out.

Yes, I think you're damn right about there being deep potential for hard ciders in PA. With the wealth of odd apple types about, and a growing number of people looking to try something outside the saccharine sweet strongbow/woodchuck/magners trio it's a ripe market waitng to be plucked. In fact there are two local newish central pa producers - Reed's orchard and Hauser estate. Hauser estate makes several varieties, some of which fall into the woodchuck sweetness trap, but others like their "Traditional" which have some real English character to them and are very exciting. Cant yet report on Reed's, but I will be able to soon as I'll be heading over there in the next ten days... I'm preparing for a hard cider and cheese tasting night at the farmstead creamery I work for :)

Had some the other day at Otto's, and it was delightful. Did remind us of French ciders (we lived there for a year, and loved them.) Found some larger bottles for sale at Wegman's, and have 3 chilling in the fridge. Looking forward to a day when it might be on tap!

Maybe I can get product from this mill. I live in VA and picked up cider from Country Acres. Steer clear of that stuff, don't know if it was previously frozen or some off beat apple genus but it is pretty bad. They need to go to Vermont and learn how to make cider.