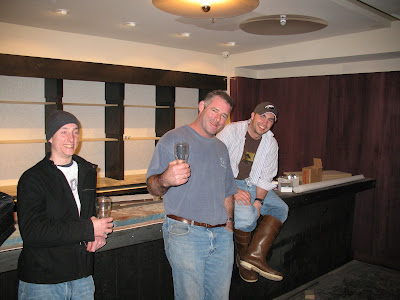 I see on Facebook that Patrick Jones and Flying Fish brewer Casey Hughes are currently brewing a special batch of pilsner at the Triumph brewpub in Old City Philadelphia. It's "Pils Jay's Way." After I wrote a eulogy for Jay Misson here on the blog, I met and corresponded with a lot of his friends. As often happens, I learned a lot about a good friend after he died. I hate that, but I loved it, too.

One of those friends of Jay was Peter Kruse, who interned with Jay at Gordon Biersch back in 1996. He got in touch with me through the blog, and wound up mailing me a copy of a handwritten recipe Jay had given him: "Pils -- Jay's Way." I got it into Patrick and Casey's hands, and today they're brewing it. It's got just a touch of smoked malt in it, and I'm very curious to see how it comes out. It should be ready for a pilsner night Triumph is putting on Thursday March 12th of Philly Beer Week, the "Klash of the Kaisers"; more about that here. (And more about today's brew here; thanks for the note, Felicia!)

Tough to be at home while this is going on, but all I'd do is watch and take pictures. Drinking it is what I'm good at.

Thanks to Peter, and Patrick and Casey. Cheers, Jay!
Posted by Lew Bryson at 11:45

Hi Lew, I just got home from watching Casey and Patrick brew this beer and posted a story about it on Meal Ticket. Your Jay Misson eulogy and reader comments were both helpful and very touching. Thank you.

I look forward to sampling and enjoying Triumph's Tribute to Jay....Pils Jay's Way. A Way to keep his legacy alive and not forgotten. I know we all miss the Mission Man.

That is a night I simply cannot miss. Please remember to bug me.