Surprised in the Boonies

James Carville truly earned my enmity when he coined his famous evaluation of my home state: "Pennsylvania is Philadelphia and Pittsburgh with Alabama in between." (Apparently, it doesn't still apply, if it ever did; see this study of the evaluation by political pollster G. Terry Madonna.) As someone who grew up in between, I take that personally. No slant on Alabama -- oh, hell, yes, it is a slant on Alabama, and I think you know why!

Be that as it may, the beer scene out in the hinterlands -- with worthy exceptions like the state's excellent crop of small breweries and brewpubs like Elk Creek, Berwick, Sprague Farm, Bullfrog and the like -- is pretty damn sad. Yuengling, Schmidt's, and an ocean of Coors Light is what you'll find when you get off the Interstates north of I-80 and west of the Susquehanna till you get to Pittsburgh or Erie (with the booming exception of the Wyoming Valley, and a couple islands like State College and Williamsport). 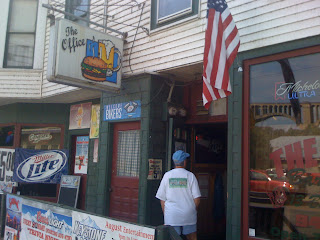 At least, that's what I thought until last Friday. I was in Nicholson, PA, with my bro-in-law Curt, picking up a bookcase Cathy had purchased the day before at Endless Collections (neat little antique store that also carries Endless Mountains Coffee, which I heartily recommend). We got the bookcase in the back of the Jetta, and then wandered down the hill into town; there was a florist there (The Pinery) that also sold local cheeses, and we got some LeRaysville XXX-Sharp Cheddar that was just fantastic. Two doors down was The Office, a local bar, plastered with Coors Light banners in anticipation of the town fair that night, and they were advertising 13 taps in the window, so we figured, what the hell? 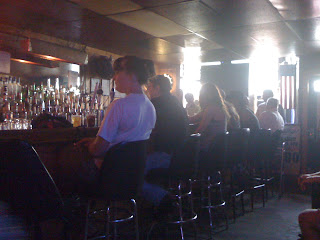 Hey, you can see the picture above; you know what we were expecting. 13 taps of Lite, Light, and more Light, Yueng-thing, probably Busch and Keystone, with buckets of Slim Jims and smoke. Take a look at the picture here: it was smokey (there's an exemption you can work around in PA if your food sales are under a certain percentage of your total take), and there were a fair number of missing teeth (really, it was obvious, and the sign made us wonder about how they went missing: "Warning: if you are involved in a fight here, you are out of here! For Good!") but we were dead wrong about the taps. The taps behind the bar were just what we expected, but at the end of the bar, right out in the open, were seven free-standing taps that the bartender was happy to serve us from: Tröegs Trogenator and Pale Ale, Allagash White, Hoegaarden, and Ommegang Witte (hey, it was HOT!), DFH 60 Minute, and ... wait for it...Steenbrugge Tripel.

What the... We quickly got a glass of each Tröegs ($3.50 for real 16 oz. pints!), and found them to be cold, reasonably fresh, and delicious. We didn't get any weird looks (although the bartender was a little confused about the Tröegs/Trogenator thing), we didn't catch any crap. Maybe they just put it on, Curt wondered, but I think the chances of us just happening to walk in as that happened were slim.

That's pretty awesome. When you consider that the convenience store down the road from our rental had a pretty respectable sixpack selection (AND sold gasoline...sorry, MBDA, that really isn't illegal in PA), you start getting the idea that things are going on that make the continued growth of craft beer both unsurprising, and likely to be sustainable. People like this stuff. I'm not sure who's drinking it in Nicholson (which is not a tourist town by any stretch of the imagination, although the bridge is breath-taking), but clearly someone is. This is a pretty big deal...in a pretty small town.
Posted by Lew Bryson at 14:25

Not too many years ago, Yuengling on draft off of I-80 would have been reason to celebrate. I would still order it over many of the 6 dollar hop bombs and belgian-types masquerading as beer nowadays.

My two favorite brewpubs: Selins Grove and North Country are both in small rural Pa towns (albeit college towns)

BTW where can you find Schmidt's on tap ?

I could have made a much longer list of great small-town brewpubs/brewers in PA...but until recently, those same towns had almost no other non-mainstream beer. That's changing, and I think we have brewpubs to thank for it. I just wish we'd see some brewpubs in the Wyoming Valley. Hackett's and Black Rock failed through no fault of their customers...

Dunno about Schmidt's on tap; I get it in bottles at some places, just to break up the Yuengling Premium monotony.

Pshaw! Come now Bryson even the most verdant traveler knows when traveling along Eisenhower’s Pike, one merely has to divert their jaunt to the brewery at South Main Street in Dubois to find ample stores of delicious Hahne's Export Beer, Porter or Pixie Ale

yuengling PREMIUM?? So THATS where you have to go to find that beer anymore (round here it's a lager monopoly).

You go up to Schuylkill County, you'll find all the Premium you want!

great, thanks. Been years since I've had a drink up there

Should have stopped at Purv's in Peckville. Birthplace of ....ME!!!!!

Actually, I did stop at Purv's. I was underwhelmed (and charged $28 for two totally un-rare or big sixpacks).

I'm on the fringe of the Wyoming Valley (Mountain Top) about 25 minutes from Berwick Brewing Co. (can't complain about that). But in recent years, especially the last 2-3 we've really seen things pick up in the area. Six pack shops, more and more bars serving micro variety, and many many local bars serving local beers, very local beers, like Berwick B.Co., Breaker Brewing, etc. All wonderful developments. The next time you're in the area, I highly recommend The Anthracite Cafe in Wilkes-Barre. There's a link to their place in MyBeerBuzz.com, check out the menu...

Things have definitely exploded in the Valley, but it's slower up in the Scranton end. Been to the Anthracite, loved it.

I have heard rumors that returnable bottles of Straub and Yuengling are going away. Now it seems more likely: http://www.centredaily.com/2010/08/18/2157210/its-up-to-pa-brewery-to-can-a.html

Sam-- happily it's still out there, you have to look into the old bars of wilkes-barre or across the river to find it.

Yeah, but lunch at the old Anthracite...homemade soup, a good sandwich, and a cold Steg draft was always a treat when I made it to W-B.

Now it's Dukey's, the Ooh-Ooh Bird, and a few others that still carry that fading flag.

next time you are in Scranton try Andy Gavin's -- across the street from the County Jail on N Washington ave - about 13 blocks out of downtown -- nice porch and pation - good pub grub -- nice draft selection - and nice looking bartenders -- .30 cent wings on Sundays, Tuesday and Thursdays -- Clam night on Friday $4.95 for an order of Steam Clams -- good porketta sangwich with roasted red peppers and provolone on a national bakery hard roll etc etc. --