But I'm back, with cool news: Diners, Drive-ins, and Dives visited Memphis Taproom, we all know about that, and it was very cool...but they also stopped in a Bucks County beloved, the Pineville Tavern, just up the road from my home, and a place where I've dropped anchor for a good jar of Guinness on occasion (because the beer pickin's are admittedly fairly slim, but the food's excellent). Here's the scoop: the show's tomorrow night! 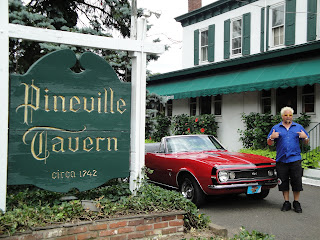 Pineville Tavern (est. 1989) will be featured on The Food Network’s, Diners, Drive-Ins, and Dives on March 7th at 9PM (re-running on March 14th).  Executive chef (and 2nd generation owner), Drew Abruzzese will be showing host Guy Fieri what goes into making some of the most popular items on the menu – like the P.V.T. Snapper Soup (or as Guy refers to it on the episode – “Snapping Turtle Soup”).  Drew will also revel the secret recipe for the Abruzzese family’s 4th generation meat ravioli and marinara sauce.
Drew has worked side-by-side with some of the most well-respected chefs in the area – Danny Meyer (New York Restaurateur, Union Square Hospitality), Jeffrey Chodorow (New York Restaurateur, owner of China Grill Management), and Matt Levin (owner of local Philly restaurant, Adsum).

So, just where does one go to acquire a Pennsylvania Snapper? ;)

Snapper soup, home made ravioli. Really? Beer or no beer, I would be a regular!