"What Dad really wants is whiskey"

I know...the following is simply a press release from Buffalo Trace. I should do better in a blog post. But that opening line caught me, and the rest of it, well, yeah, it's about selling whiskey, but you know, I never knew there were 8 different Blanton's stoppers.

There's nothing wrong with buying your dad bourbon -- okay, unless he's a drunk, or a Mormon, or something -- it's downright manly. It's something I've been giving as gifts for a while now. I'm stocking up, actually: the dopey PLCB has Four Roses Yellow Label on clearance for $11.99 a bottle (and there's plenty left). I've been buying Christmas presents in March...because, you know...what Dad really wants... 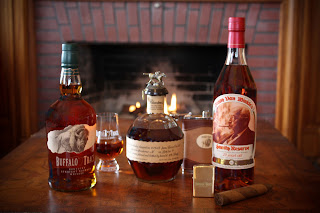 For the rugged adventurer dad: Buffalo Trace Kentucky Straight Bourbon, a whiskey for men who blaze their own trail. Herds of ancient buffalo carved a pathway that was followed by America’s first pioneers and explorers. This bourbon is named for those buffalo and the rugged pioneers who followed them westward.  Acclaimed as “one of the world’s great whiskies” by world renowned whiskey reviewer Jim Murray, Buffalo Trace is a small-batch bourbon aged 8-11 years with a vanilla aroma, rich taste and dry finish. Priced at just $25, this San Francisco World Spirits Competition double gold medal winner will please dad’s palate without putting a dent in your wallet.
For the sophisticated dad: You can’t go wrong with Blanton’s – the world’s first single barrel bourbon.  Perfect for dads that have elegant taste and want everyone else to know it. This distinctively shaped bottle is adorned with a stopper depicting Kentucky’s other famous pastime, horse racing. Little known fact that will impress dad – each stopper is imprinted with a small letter in the lower left corner that when complete, spells out “BLANTONS.” The depiction represents the running of the Kentucky Derby, with the jockey on each stopper captured in various poses until his quest ends in victory.  This bourbon classic has won countless gold medals in the International Wine and Spirits Competition. This one of a kind gift will set you back around $50.
For the dad who has everything: Pappy Van Winkle 20 Year Old – it oozes old money and prestige.  The label portrays Pappy himself smoking a stogie – there is no better gift to give to your old man. Priced at $100, this may be at the top of your budget, but it’s also guaranteed to stay on the top shelf of his liquor cabinet. This wheated recipe bourbon has received a “99” rating from Wine Enthusiast Magazine for its rich, smooth, creamy flavor. The finish of this 20 year old whiskey is long and elegant, and it even comes in a nifty red velvet bag – who can resist?
Don’t forget Father’s Day is June 19th!  No matter which bottle you choose, you can be assured that it will be enjoyed by a man with good taste.
Posted by Lew Bryson at 15:34

And you can special order the Buffalo Trace Experimental series to your locals now. I'm going to pick up my 1991 after work today.

Hey, thanks for the heads up on the Four Roses Yellow Label. They had three bottles left at our local State Store and I snapped them up today...but not for gifts, I'm drinking them myself!