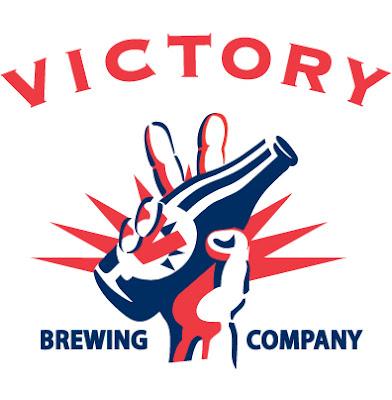 Today is the day one of our favorite local brewers celebrates their anniversary. Victory Brewing in Downingtown is sixteen years old today -- they can shoot pool in public and drive -- and it's been a great sixteen years. Victory powered out of the starting blocks with a successful pub -- remember that hugely high, echoing ceiling and concrete floors? -- beautifully well-made beers, and a firm determination to make beers that they liked, confident that the growing number of better beer fans would like them too. The one we did like, HopDevil, caught them somewhat off-guard; they'd expected the malty Festbier to be the winner, not the aromatically bitter IPA, but they adapted, of course.

Now they're celebrating sixteen years of success:
It's time to congratulate them on their success -- again! -- and mark it as a celebration of the success of Pennsylvania craft brewing -- American craft brewing -- as well. The numbers keep swelling, and beer is more varied and more available than ever. Victory will be opening a major beer hall in Philadelphia this year, Sly Fox and Tröegs are bringing major new breweries online, Yards continues to expand, and we're finally -- finally! -- seeing a new wave of brewpubs in the area, something we've been waiting on for years (and thank you, Iron Hill and McKenzie for keeping the lights on with new places).


But as founders Bill Covaleski and Ron Barchet like to say, they dove through the window of opportunity for the first wave of American craft brewers just as it was closing. This is also the sixteenth anniversary of what was called The Shakeout, when the first blush of craft brewing success flatlined, a victim of its own success. Craft brewing was growing fast in the early 1990s, a faster rate than now -- 40% in some years -- although on a much smaller base. But that growth attracted dumb money, and bad decisions were made, and bad beer was getting out on the shelves...and soon the capital would dry up, and it would be very difficult for new brewers to start up, or for established ones to expand, or even get sustaining loans through tough periods. It would be almost five years before things loosened up again.

Are we in danger of that again? Is dumb money coming in, are expectations rising, will bad beer flood the shelves? I'll be honest: I did think so, a few years ago. I was worried. But now? No, I don't think so. First, and most convincing, solid bank money is available to established breweries, even in the current economy. Three years of unstoppable growth in the face of a general downturn in beer sales is quite a convincer. It may not be cheap money, but it's there. Second, brewers like Victory have done their part to nail down the quality of American craft brewers. I'm talking about safe in the bottle quality, no infected beer (not unintentionally infected, anyway!), solid shelf-life quality. It used to be a crapshoot; now getting a sub-par beer is much, much less likely.

Finally, and maybe this won't mean as much to younger craft drinkers...there's no raspberry beer. Cheap sweet raspberry beers were huge in the run-up to the shakeout, but when the trendy drinkers tired of them, they moved on to the next thing, and it wasn't a beer thing. No, the beers you see selling big today are beers like Victory makes. They're beers that rely on solid cornerstones of brewing: malt, grain, hops, yeast, and what brewers and maltsters can do with them. That's the story at Victory -- always has been -- and that's what's selling craft beer to America.

The wood fired pizza oven went during the remodel 4 years ago.

The beer is brilliant, but the food quality has decreased dramatically. Plus, bring back the pool tables!

Can't say that I agree on the food quality. Still good the last two times I stopped in.