"Terroir" is a French word we usually think of in relationship to winemaking. It means "land," or "earth," and is shorthand for goût de terroir, literally "taste of the earth." Winemakers talk of terroir as the totality of the effect of place on grapes and wine: the soil, the altitude, the latitude, the surrounding topography, the climate, the local flora and fauna. 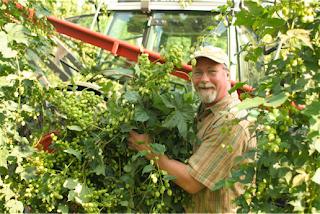 Victory's Ron Barchet got a wild bee in his bonnet about terroir once Victory got to the size where they could start working directly with hop growers in Germany. That was in 2007. Before then, they'd used a broker, like most small brewers; going to Germany isn't cheap, dealing with individual farmers adds time to the process. But as Ron told us at Victory's Terroir des Tettnangs event late last month, there's no middleman, and you get a direct connection to the hop growers. They went directly to Tettnang (you can see Tettnang below, at the center of the map, right near Lake Constance in Baden-Wurttemburg, south of Stuttgart.

Why Tettnang? "Because I love Tettnang hops!" Ron explained, with the same huge grin you see in the picture above. "Prima Pils has always had a higher percentage of Tettnang, because using whole flower Tettnang hops is how you get that great pils flavor." The man is obsessed with pilsners, no doubt, and to the area's great benefit; while so many other breweries have been brewing up one single-hop IPA after another (single-hop double IPAs, too), Victory's Braumeister Pils series has been introducing local lager lovers to one beautiful Noble hop after another, including one of my top 10 pilsners ever, the beloved Spalt Spalter Braumeister from about five years ago.

Ron brought that direct connection to Downingtown: two hops farmers from Tettnang came to America for this, and one, Ludwig Locher, spoke quite eloquently -- in English, Gott sei dank' -- of the Tettnang terroir: mild climate, idyllic scenery, and deep, deep soil. They grow almost all aroma hops here: Tettnanger Tettnang, Hallertauer Mittelfrüh, Perle, and a couple others. Ron's obsession is quite focused: Ludwig explained that there are about 100,000 tonnes of hops harvested every year; about 38,000 tonnes come from Germany. Tettnang produces about 1,780 very special tonnes.

For the 'experience,' we were presented with six beers, two at a time. The beers were as identical as Ron said they could possibly make them, excepting only the hops used: all Tettnang, but from different areas and times. The first pair were from two different farms. We nosed, tasted, chewed...and thought. Ron called out at the beginning of the discussion: "There is not a right answer!" Both beers exhibited flowery notes, but the first seemed more distinctly bitter, with grassy notes and some dandelion, while the second had a hint of pine. The thing I noticed was how -- as always -- when we focused on the beers, looking for differences, I got more out of the beer, the subtle substance of pils shone like glad light on water.

The next pair was, for most of us, the most demonstrably different: hops from the same farm (Misselhardt), but from Day 1 of the harvest and Day 4 of what Ludwig told us was usually a 12 day process. Day 1 had a beautifully fresh aroma, a bit on the sweet side, where Day 4 had a distinctly lemony catch to it. Very interesting; the two fields harvested were separated by 200 meters of altitude as well. There was clearly something at work here.

Ron mentioned something at this juncture that I wrote down: "Harmonious bitterness." It's a German term, he explained, a blending and coming together of the hop notes in the aroma, the bitterness, the kettle hops and aroma additions, creating a whole that is, for him -- and for me, now -- the pils experience, a beer gestalt.

Ludwig talked about the soil at the same time. It is heavy clay, with quite a bit of stone and rock: hard to work, low yielding, but with a 'very nice aroma.' He laughed when someone asked him what he thought of the whole evening. "This was not so interesting as a farmer. Now that I taste it, though..." and he looked around the room at the obviously excited crowd, he turned and looked at Ron, "...we should talk." Hops might be costing a bit more next year!

We had two more beers to try. The Strass, another farm, had that same floral character, and the lemon zest, but also had a pleasantly buzzy pepper note. The last beer was made with a blend of the other five hops, the Braumeister Blend. This...had harmonious bitterness. While the aroma was not as precise as the others, it was beautiful and bright. Great pilsner.

We had a meal then, good German stuff (excellent dumpling, and I can't believe I'm saying that). I couldn't help agreeing with my old friend Uncle Jack Curtin: "Victory is an exceptional brewery which doesn’t get enough national attention and...this region is still the best beer making and drinking part of the nation."

Victory does make it great to drink beer around here. Once again: happy anniversary!
Posted by Lew Bryson at 13:10

That sounds like a great time. I had heard about terroir but always put it off as marketing to drive a higher price. Then I saw "Oz and James's Big Wine Adventure" season 2, and James tastes two wines from the same vineyard, from the same hill, but a few rows seperated, and he was blown away by the difference (the earth composition was extremely different between rows).

I could only imagine the cost and availability of such beers though (same grower, same field, unblended hops).

Availability is very limited, and they're only on draft.