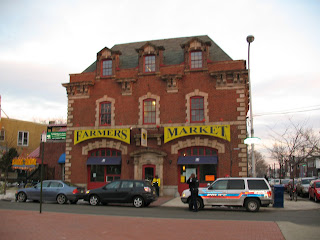 I went to a Dock Street event tonight, the re-launch of Illuminator. Wow. How long has it been since we've said that? This time, of course, it's the new Dock Street, Dock Street at the Firehouse (seen above on the right), out at 50th and Baltimore. It's a changing, gentrifying University City/West Philly neighborhood. The last time I was out that way was about 7 years ago, and things have definitely changed.

But I couldn't tell you if Illuminator had changed or not. The beloved Dock Street doublebock died too long ago for me to remember it, sadly. The new one (currently brewed and bottled at Mendocino in Saratoga, NY) was rich, thick, malty, and boozy, with just a hint of licorice on the end: grand stuff on a late winter evening. The Dock Street Amber I had was too cold to really appreciate. 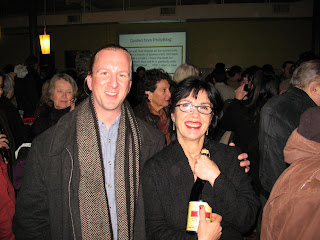 That's Chris Lapierre and Dock Street owner Rosemarie Certo on the left. I managed to catch a moment where Lapierre, who started brewing at the old Dock Street brewpub at 18th & Cherry, came in and gave Rosemarie a bottle of beer he'd brewed at Iron Hill West Chester, where he's the head brewer now. A happy moment that no one else really caught the significance of. I didn't get to talk to Rosemarie for more than a minute, she was very busy.

But the executive director of the University City District did speak, and what he said was heartening. "We're here to celebrate Dock Street, and it's been a long time coming." This was just the first celebration, he said: contruction is about to begin after a long zoning battle (Church leaders: get educated. Alcohol is coming to your neighborhood, but getting it in the form of a brewpub is a much better deal), and "Dock Street will jump-start the revival of the Baltimore Avenue Corridor." No solid word on when it will open ("open later this year," and you know what that's worth), or who the brewer is ("they have one, but they're not saying who it is" said one of the brewers there tonight).

I love to hear community leaders who understand that brewpubs raise neighborhoods up, not knock them down. Brewpubs are the kind of drinking establishment you want in your neighborhood. They celebrate the drink, not its effects; they raise beer and food together. They attract a different breed of cat.

So I went to Dock Street tonight. Still feels weird to say that, but I suspect I'm going to get more practice.

Now there's some good news we can certainly use. That just makes me feel warm and nostalgic all over. This should certainly be one of Philly's beer highlights of the year. (hopefully, this year).

I'm crossing my fingers on "this year." The building's solid, but I'm guessing the dry neighbors haven't given up yet. Sad.

Wonderful news! It will be a great addition (return? readdition? resurrection?) to the Philadelphia Beer Scene. I have many fond memories of the 'old' Dock Street and their beers. Like Bryan said 'hopefully this year'...
And I had totally forgotten that Chris brewed there! Thanks Lew!

I put down many a Dock Street when i worked in Philly in the 80s. This will be a very good thing, YAY!!!!!

When I first moved to the area (1995) my dad took me into Philly to show me around a bit. I looked up the brew pubs and we decided to go to Dock Street. Of course, we went to the street, Dock Street, down by Society Hill. Oops. We eventually found it and had a great time. I can't wait to check it out again (with better directions this time ;-)).