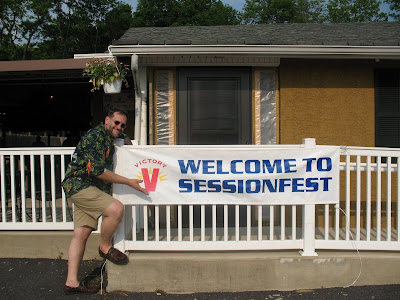 Thanks to Victory for the banner!

Yes, the Session Summer of Love was almost two weeks ago, and I'm just getting to writing about it now. I've been busy, you'll read about it soon. So here we go.

Three days of session-strength beer and picnic/patio food, up the pike in Zieglerville at Ortino's Northside. A theory of session beers that we tested to destruction (and then stood around, kicking at the shards). Let's have a look.

Thursday's dinner was disappointing in turnout (twenty, if you counted me, and Dan, and the waitresses), but we had a real good time. When beer dinners go small for whatever reason, I like to embrace the smallness and work it as intimacy, and that's just what we did. We all sat in the middle of the new outdoor dining area and bar (and a nice place it is, too: nice tent roof overhead, plenty of shade and breeze, the trees all around and the farmland across the road, and the gentle tang of the smoker) and talked beer while eating really great fresh-made picnic-style food.

That was actually my second trip up to Ortino's that day. In the morning, I ran down to Yards Brewing to pick up a sixtel of Philadelphia Pale Ale for the Saturday event, and Nancy Barton gave me a sample sixer of Sexy Sister while I was there. I dropped off the sixtel, and John Ortino stood me lunch at his original place, down in Schwenksville, where I was joined by Iron Hill North Wales brewer Larry Horwitz, who was in town for the same reason: dropping off beer at Northside.

Anyway, I took some of the Sexy Sister along, and some bottles of Shipyard Chamberlain Pale Ale I'd just gotten as well; a beer I've always liked, but rarely got a chance to drink because of Maine-only distribution. Shipyard's taking it national (or at least regional), and I thought folks might want to try it. One guy promptly tagged it as his fave of the evening; I liked it too. All too soon, after a delicious dessert of berry nachos (fresh berries on whipped cream and sugared flour tortillas), the evening came to an end, and I headed down Rt. 29 to Collegeville and home.

Friday night, Cask Night, Cathy came along, and we had a real nice dinner there at Northside; she had crabcakes, I had the Chicken Italiano special with a pint of Victory Sapphire Bock, the special-edition bock they made to showcase the Bavarian Saphir hop. Good stuff, but hardly session beer, so we went over to the bar to get stuck into the evening's offerings. The Legacy hadn't arrived yet, so I started with a pint of Larry's cask of Belgian Pale Ale he'd brought up the day before. Quite nice, tasty, drinkable, under 4.5%. Then two Nodding Heads: All Night Ale, a dark mild infused with espresso (had a kind of funky smell to it, but tasted malty and good, with a highliner zing of espresso flavor), and my fave of the night, Prudence Pale Ale, which I believe was all of 3.8%. The Prudence was quaffable but flavorful, hoppy on top and just out and out tasty. So I had another. I finished up the night with a glass of East End Wheat Hop from the night before (well, just what you'd expect: American wheat with big hop presence, a kind of manically-balanced wonder).

So...after some water, I'd had six pints of beer in about 2 1/2 hours. We walked out to the car, fired up the breathalyzer, and I blew...a 0.03 BAC. I love session beers. I was plenty legal under PA law, and so I then put away the breathalyzer and fired up the Passat, and we drove home the long way through Quakertown, and racked up 46 mpg by the trip computer. I love my diesel, too!

I was late to Saturday's session. I had to sing a wedding in Newtown. I did that, no problems, came home, changed, grabbed Cathy, and we went up to Zieglerville one more time...and had a nice time out on that outdoor patio-deck-bar with Uncle Jack, much of the crew of renegade regulars from Sly Fox, Scott Baver and his girlfriend from Legacy (Scott had brought his smoker to have a barbecue duel with John; we had to leave before the meat came out, dammit), Bryan from the BrewLounge (Adam had been there Friday night, and Bryan had joined us for the dinner on Thursday, too), and One Guy Brewing guy Guy Hagner. (Guy's also a serious barbecue hound, so he was all a-twitch waiting for the meat to come out.)

We drank some good beers, East End Fat Gary Brown Ale and General Lafayette Churchill Dark Mild among them. We talked a lot, which is what you're supposed to do during a session. But we didn't get spifflicated, and after about two hours, Cathy and I drove home to have dinner with the kids.

Was the Session Summer of Love a success? Not as big a one as it could have been. Unfortunately, much as I'd like to pin it on people's fear of session beer ("A fest without big beers? What will I taste?"), some of it was undoubtedly the location (Zieglerville is dauntingly hard to find for the average effete citydweller or mall-hopping suburbanite...the first time they go), and some was probably the holiday weekend. It was a gorgeous three days for weather, which couldn't have helped. Will we do it again? Yes. Maybe not at Ortino's, definitely not on a holiday weekend, and probably not over three days of events...but session beer cannot be denied. We will session-fest again.
Posted by Lew Bryson at 19:04

I enjoyed Friday. The Prudence was very good. Something to shoot for.

Trying to brew a session beer next here at the TBL. Maybe I'll try Alan's recipe. (I didn't forget.)

The session banner will rise again at The Northside, with a new day that will at least double what we did this year!