Walking and Drinking in Old City 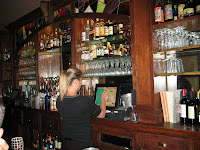 A long time ago, in a life that seems far, far away, I worked in Ft. Washington, PA, as a corporate librarian and IS Director. Really. The company fell apart just about three weeks after I sold my first beer piece (for $25), and I left libraries behind and started writing as a career.

I still stay in touch with some of the folks from the old company; they're the core of The Hunt, I see them at the Grey Lodge, we get together for beers sometimes during the year. So when I got my new gig (I'll be talking more about that soon), one of them, Les Gibbs, suggested we go out and celebrate. Always a good idea!

Accordingly, I met Les at Triumph Old City last Tuesday. It was an ugly drive down: 110 minutes to make what should be a 35 minute drive, thanks to some wicked thunderstorms that had knocked down trees and totally snarled traffic on I-95. But on-street meter parking salved that irritation somewhat, and Triumph's solid pilsner did the rest of it. 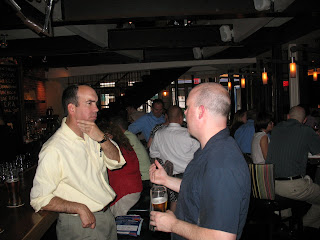 I filled Les in on the details, we clinked glasses (Saison, now, that first Pilsner just kind of evaporated in a really welcome way, and the Saison was tasting great: just a bit over 5%, not overdone in the spice department, and more complex than a wit -- get down to Triumph and have some), and relaxed.

Nice bar at Triumph: the bar itself has two levels, the main bar and a little elevated section right in front of the whiskey. You can also look up to the 2nd floor bar -- some kind of event going on up there with a lot of very attractive women -- and the brewery, and across the open barrier into the downstairs dining room -- which is where I spotted brewer Patrick Jones.

Hey! I waved, and he came over. That's him on the right, Les on the left. Not much pilsner left, he said (it's probably gone now), but the Saison had just come on a week ago and he was justly proud of it. The barrel program is progressing; Triumph is going to have some seriously interesting specialty releases by this time next year, and it's only going to get better from then on.

Patrick got back to work, and we went back to...not work. I had a Maibock (which was not in the same league as the pils and the Saison, unfortunately; still good, but not stellar), and we ordered food. There was some great salmon on Brussel sprouts and mushrooms (I think they were mushrooms, the light was kind of bad); small triangles of thin-crust broccoli rabe pizza (real good, and understated in a beautifully Italian way), and fish and chips: all that small plate stuff Triumph Old City's doing.

We finished up and decided to head across the street to Eulogy for one more; Les had never been. We sat at the downstairs bar and split a bottle of Dupont Avec les Bons Voeux, the Christmas-season super-saison from Belgium's Dupont brewery. I love this beer, it's sparky and spicy, but smooth and sophisticated. Les really liked Eulogy, and was impressed with the beer list. Hell, it is impressive! So's the service: I've always had informed and personal service at the downstairs bar.

I offered to give Les a lift rather than train out to his place, so we walked up 2nd Street...and there was Cuba Libre, just looking fine and inviting in the light rain. "Nightcap?" I asked. Sure, and I was soon enthralled with the choices of rums at the bar. (That's the bartender at Cuba Libre in the top picture, by the way.) I finally settled on a 10 Cane, a new luxury light rum from LVMH that I'd been hearing about but hadn't had a chance to try. I like these white sugar cane rums, rhum agricole (although I understand 10 Cane is not technically rhum agricole because it is double distilled to a higher proof, according to Ed Hamilton, who surely should know), and 10 Cane didn't disappoint: silky smooth, sure-handed cane flavor, and vaporously aromatic. A delicious way to end a celebratory evening.

Ya know, I thought I heard some rumbling across town. I figured it was thunder, but now I know better ;-)

Glad to hear that you, too, had a nice rewarding night in the city like us after those horrendous storms and even worse traffic conditions.

Good news to hear about Triumph's brewing activities, thanks....

"Triumph is going to have some seriously interesting specialty releases by this time next year, and it's only going to get better from then on."

Any chance they'll start a 750ml "to go" program, ala Iron Hill? Or at least petition for growlers in Philly!

Oh yes, mojito nitecaps at Cuba Libre's while escaping a summer downpour, has been an awesome experience of mine as well. This happened to me a few times actually; once with my Mom after having eaten at Mexican Post, when the sky opened up as we were on the way back to the car. We had just downed separate personal size pitchers of mango margaritas on the rocks, so we were hammered already but we had to have one of those incredible mojitos. Lol