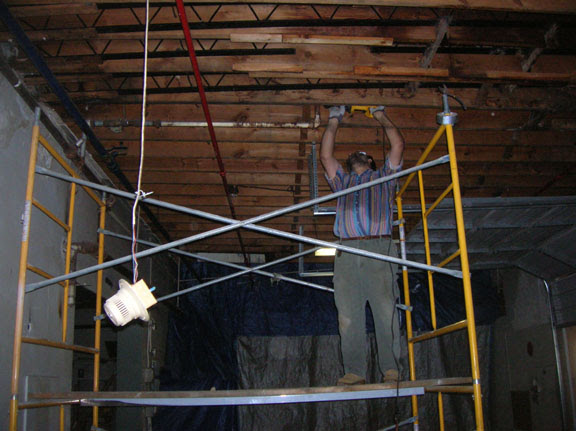 Guy Hagner tells me that he's got federal approval to brew, just waiting on local and state approval to become Berwick's first brewery in modern times. In fact, he did say that he's realizing that there's just not that much more to do before he's ready to rock. Just needs those approvals and some electrical work (of course, that's where some brewers have been...for months).

People are getting excited about this, and I have to say, with one of the beers planned as a session-strength Czech-style lager called Lew's All-Saaz Saaz-All (a generous thank-you for one day of demolition), I'm pretty excited too.

By the way, you may be seeing more of Guy here. I got him going on the pros and cons of decoction mashing a while back, and suggested that he do a once-a-month short "fundamentals of brewing" post here. He's thinking about it. I'm leaning on him. We'll see what happens.
Posted by Lew Bryson at 22:13

Email ThisBlogThis!Share to TwitterShare to FacebookShare to Pinterest
Labels: One Guy

I first read about Guy's new brewery on your website, and have been eagerly awaiting new news. I live in Pittsburgh, and will take a weekend trip to philly via Guy's brewery whenever it opens.

How long does this sort of approval usually take? I hope everything goes well for him.

Does Guy decoct? If so, good for him!

"How long" and "usually" just don't go together with this kind of thing... It's hard to say when things will happen, and until they do, he can't do anything. Even once they do happen, Guy wants to get a solid reserve of beer built up before he opens. So...it's gonna be a while!

Which kind of answers Joe's question: Guy's not doing any brewing for now, decoction or otherwise.

I worked with Guy at Franconia Brewing Co, He made the best German Brown Lager! I expect the same from him. I can't wait to taste the beer.
Best of Luck!!!

He's talking about Franconian braunbier, a luscious, malty brown lager pretty much found only in Franconia; I got some at the Klosterbräu in Bamberg. Guy's Franconia Brewing was the only place I've ever know to do a braunbier in the U.S., and it was delicious.

I went to Bamberg, the Kloster was closed on the day we climbed to the top. :-(

Different Kloster: this one is down by the river.

Hmm, according to our friends at BA, the Klosterbrau Braunbier is a Marzen/Oktoberfest style. Was denken Sie, Herr Bryson?

But back on subject, I can't wait to read some of Guy's thoughts on brewing and beer.

I think that's more a case of "had to put it somewhere." It's a different color, it's a different taste (not as sharpish as Ofest, more sweet), and I think it might be lower in carbonation, not sure.

Guy not only made a great braunbier at Franconia, he also made the most German-tasting domestic beer I've ever had, a contract version of Bamberger Herren Pils. I'm only an hour and a half from Berwick, and am looking forward to the 'all-clear' signal from Lew for a run east soon thereafter!