Orval: I've never had this beer before (or maybe I have) 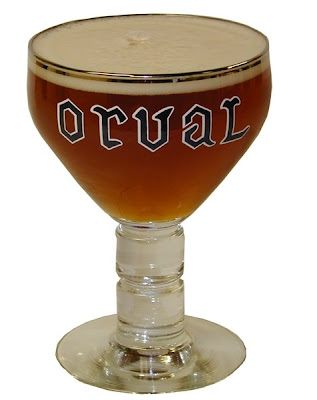 I'm working on some stuff for Ale Street News this morning -- the first entry in my new, as yet untitled column for ASN -- but I wanted to take a moment to talk about one wonderful thing that happened when I was in Belgium. Actually, it happened several times: I finally had Orval.

Before you react in astonishment, yes, I've bought and drank bottles of Orval. But after realizing that A)none of them ever tasted even vaguely similar; and B)people I respected told me that it was a completely different beer fresh, I decided that I'd just stop drinking it until I got to Belgium. And I did.

So when Steve and I got to Brussels, the very first beer I bought (not counting the one glass of Hoegaarden at the comped lunch we enjoyed thanks to Flemish Tourism: fantastic mussels, the Hoegaarden was kinda eh) was an Orval at Poechenellekelder. It was a revelation. I wanted to have more, so I did, but just one; we had other places to go.

When I had time to sit and muse (on the last full day of the trip, at Het Waterhuis in Gent), I thought to myself that the thing I came to love about this fresh Orval was its simplicity. It's not a huge beer, or a layered beer, or a rich beer. It's very refreshing, without being light beer insipid: Orval's crispness comes in a much more substantial package than that. It's funky without being off-putting; a subtle brettanomyces character that doesn't insult my intelligence. It is, as Steve said, three things at once: sweet, tart, and dry. It's the combination that is the genius, and I'm afraid, the balance of these three varyingly robust elements is what makes this such a fragile beer. The first bottle I had at the Poechenellekelder was less than five weeks old, and it was nothing short of brilliant. I guess I'll just have to drink more when I go back.

(Is Orval different, has it changed? Many have said so, and decried its loss of character. Steve told me yes, how they make it has changed; certainly so. But I can't judge if it's better or worse, because of my variable at-a-distance experiences; I had my first Orval back in 1989, and it was quite a bit fizzier than this fresh stuff, more bitter, and not as much brett character; I actually remember it distinctly, remember where I bought it, where I drank it and who I was with and what we were eating, and the beer stands clear in my mind: it was not this beer...but what does that mean? All I can say is that I find this Orval very damned nice...and leave it at that.)

Okay, another addition to this. Stan Hieronymus picked up on this and expanded it with something Vinnie Cilurzo told him: go read it there. So... "Orval is best fresh" is personal preference. And the way it tasted differently to me every time I had it...is the way it works. Brett is a many-splendored thing, and it takes a long time to work, and it never sleeps. I should not be surprised when it tastes differently, or disappointed. I'll work on that. (Although I'm still happy to drink it in Belgium, particularly at the price.)

I'm not afraid to admit my ignorance in this. This is why I make these trips, at not-insignificant personal expense, and not always for a particular assignment (although I sold a number of stories on this one, happily). I do it to learn, to fill in the gaps (the same as many of you). With luck, I'll keep learning the rest of my life, and I'll happily share it with you.
Posted by Lew Bryson at 11:21

I haven't tried Orval in years, for the reasons you state.

Dunno if I'll ever get to Belgium to try one, but stranger things have happened.

Changed or not there is no other beer like it on the planet. Just an astonishing, and like you said "simple", creation.

Just adore it. Especially with a couple years age on a bottle.

If I could get it fresh, and age it myself, I'd really like to try that.

This review of Orval is complete and utter hogwash. You can get fresh Orval in the US. I have had bottles of Orval that have come from the brewery in a month or two of being bottled. You need to get your distributors to get you fresher bottles. And don't tell me Tom Peters can't get fresh bottles of Oval at Monk's. You don't have to go to Belgium to "really have" Orval. This is a beer that is meant to be bottled, enjoyed in the bottle, and enjoyed both young, and with age.

First, it's not a "review." Second, it's my experience, I didnt' make it up, so it's not "hogwash."
Finally, I don't remember anyone saying anything about bottled vs. draft: all the Orval I had in Belgium was bottled.

As for getting it fresh in the U.S., I'll be checking bottling dates from now on. As for you...maybe you want to look into a little anger management. It's beer, sonny, it's not religion, politics, or your mother we're talking about.

I've had several goes at "getting" Orval and am now aging a bottle to see what difference it makes.

One thing that definitely makes a difference is the temperature you serve it at - it tastes very rough and raw at fridge temperature but it much smoother once it gets up to the recommended 12-14 degrees.

I guess it depends on what market you were in. One would think in the Philadelphia market, with the number of Belgian beer bars and Belgian restaurants it has, getting fresh examples of Orval, would not be that hard a task. As mentioned, Monk's Cafe seems to be a good place to start on your quest for having Orval for the first time in Philadelphia. So, I can't understand how you have "never had this beer before".

So, I can't understand how you have "never had this beer before".

Guess you want to read the post and the comments, in which I carefully, painfully explained the experiences I've had which led me to write this post.