The Session: It's not beer, and it's not organic, either 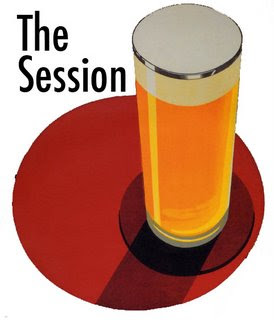 Call me unconventional (please, I love it when you do that), but when I read Chris O'Brien's proposal for The Session this month -- "Simply publish a post related to organic beer. " -- I decided to do just that...by posting about a non-organic vodka.

I did a few stories about organic beers in the past year, and mostly what I found is that there's a ton of disagreement about what "organic" means, as Chris points out:

Only beers verified by independent certifiers as meeting the legal organic standards are allowed to bear the USDA Certified Organic logo... Lots of brewers use Certified Organic malt and/or hops but have not had their facilities and processes certified. Legally and in practical fact these beers are not organic and are prohibited from being marketed as organic. But for this Session, it’s up to you to decide what to count as organic. Feel free to comment on beers that someone just tells you are organic, but be aware that just because someone has good intentions and seems trustworthy doesn’t mean that their beer is in fact organic.

I decided to take Chris at his word and sidestep the whole thing -- even though I have some organic beers available, like Pinkus, and Wolaver's, and Peak, that are eminently drinkable and worthy of praise -- to post about something "related to organic beer," a different concept that's been done rather well by McCormick Distilling, a huge outfit in Missouri that you probably haven't heard of before. The only brands they own that I'm really familiar with are Tequila Rose and Wiser's Canadian. But McCormick Vodka is the third-biggest selling domestic vodka in America...so they're doing something right. 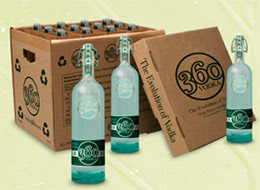 This new brand looks right, too: 360 Vodka. 360 is not organic. It's sustainable, it's eco-friendly, it's really pretty neat. The distilling process uses an advanced still that re-captures much of the waste energy (200% more energy efficiently than conventional stills, they claim). The grain is locally grown to cut down on transport energy use. The labels are made from New Leaf paper: 100% post-consumer recycled waste paper (chlorine-free processing), the bottle is 85% recycled glass, 70% post-consumer, the glue on the label is soy-based. The bottle, as you can see in the picture, is a flip-top...and each bottle comes with an attached postage-paid mailer (attached by biodegradable fiber twine) and instructions on how to remove the bail and cap and send it back to McCormick, where they'll wash and re-use them. The sturdy case is all recycled paperstock, with no glue, and as you can see, it looks like a filebox...which is exactly what they advise you to use it for.
It's all pretty impressive, and when I talked to McCormick president Ed Pechar a couple weeks ago for a story, he was quite enthusiastic about it. The more they talked about the idea, he said, the more ideas people came up with. He was quite proud of the still, the most advanced technology they could find (something that's getting a lot of attention from distillers and brewers, by the way: energy-efficiency is going to account for a lot of plant upgrades in the next ten years). The buildings that hold the distillery have been designed to have a minimal carbon footprint, the website even runs on wind-generated power.
"It's not organic," Pechar told me, emphatically. "It is green, and sustainable, and local, and low-impact. Those are things we can do something about."
I'm not saying that organic is not obtainable, or a fantasy, or elitist: I'm actually cooking soup with mostly organic ingredients right now, and we get produce from an organic CSA. But low-impact and sustainable production, green production, is another, important angle.
Of course, the drink is important too. 360 has a clean aroma profile (yes, I know: it's vodka, it's supposed to. I'm a pro, and I used to really like sipping vodka: all vodkas are not equal, and they have distinct aromas if you pay attention), without any of the solvent aromas of cheap crap or the sweet tinge of doctored vodka. It sips smooth, no burn, with a nice, plush texture, and no off-flavors or aromas in the finish. This really is nice...for vodka, I mean: it is what it is. But I like this idea, and the execution is nicely done.
Posted by Lew Bryson at 09:05

Email ThisBlogThis!Share to TwitterShare to FacebookShare to Pinterest
Labels: spirits, The Session, vodka

Very cool, Lou! Being in Missouri and trying to eat locally as much as we can, this is a nice addition. Glad to hear the quality is decent too.

Nice idea, but I wish McCormick was still making their exceptional bourbon that disappeared 20 years ago!

Think about what you're saying, Sam...Missouri is very much off the slab...

Oh, right. Then it MUST have sucked! I have some McCormick in my library, and it is consistently admired when it's poured. Soft, subtle, and well balanced at 86 proof, I believe it's from the very early 1980s. REALLY good stuff!

Heh, heh. Yeah, well, like I always said, Michter's weren't exactly on the slab, either.

No, but you did say that Michter's were on A slab. How about Weston,MO?

Let me put my resources onto the stratigraphy around Weston and have a looksee. On initial, it looks like it's not limestone, but sandstone. But I may not be reading this right.