Another great reason for a longer primary season... 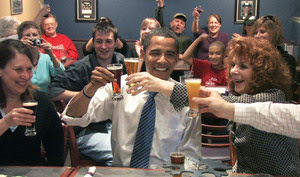 I've long been an opponent of the "front-loading" of primaries that the political parties have been pushing for years. Get it over with quickly, they say, and let's get on with beating our real opponents; the not-so-secret subtext being that the quicker it's over, the less time we spend beating up on each other, leaving a bruised and poorer candidate. All too often it leads to the selection of a candidate who may not be the best, who hasn't been tested, and to states like Pennsylvania, with late primaries, not getting a voice in the nomination process.

This "wisdom" has been shown to be bogus in this election, as the two Democratic candidates not only have become stronger -- Obama sharpens his positions and got a fantastic opportunity to make a major speech on race relations, Clinton loosens up a bit and gets a major boost from Chelsea (anyone remember the great job Mike Nutter's daughter did?) -- but they've continued to raise huge amounts of money.

Best of all, they've gotten so run ragged by the campaign that they're rolling up their sleeves and having a drink. See the great picture above (from today's Philadelphia Inquirer's, taken by Sarah J. Glover) of Obama at Bethlehem Brew Works, teeing up for a beer with Peg Fegley -- looks like maybe he's got an ESB? (Yes, that's what it was, according to an e-mail from BBW, and the Senator's reaction was "Now that's a good beer. I like that. That's good stuff.") Hillary had a photo op boilermaker in Indiana -- appropriate, in Purdue-land -- and is reported in today's Inky as being fond of Blue Moon with an orange slice (oh my, a Democrat, drinking a Coors product, that's made in Canada? Oh, the humanity!).

Kidding aside, folks, this is good. Everything that puts beer or whiskey (anyone know what whiskey Hillary drank in Indiana? Ruch, I'm not posting any comments from you...) in the mainstream, as part of a normal person's life -- which it is -- is good. Showing national figures drinking one drink without going on a mad binge is good.

And, well, Obama in a brewpub...that's freakin' gold, people. 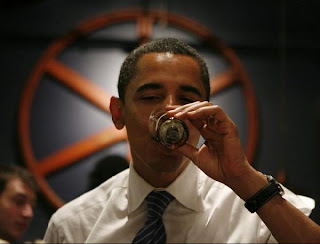 We'll have a chance every 4 years to tie this "stuff"in with Philly Beer Week. I can see if now - "keg crawl with the candidates".....OK - so maybe I can't see that happening but look if Mayor Nutter can tap the first keg, why not?

Crown Royal? Really? Man, she's on a serious Canadian thing. Is she a closet NAFTA supporter?

Is the fact he was once on a stag do in a small British town also gold?