Snatched from the jaws of defeat... 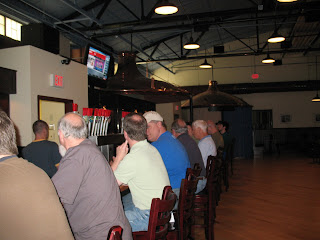 Victory's restaurant and bar have re-opened -- on time -- and I have to tell you, it was time (and a bunch of bucks) well-spent. Unfortunately, most of my pictures look like hell. Sorry.

There was still work going on as I walked through the doors today at 11:30 AM, and there would be work going on the whole visit -- kind of like going to sea while they're still riveting plates on, I said to someone. But what the hell: the taps were working and the expanded kitchen was rocking (food came really fast today), which is really all we needed.

The new look is very nice. There's a lot more room (seating for 240, vs. 120 in the old place) without feeling cramped, there's still a long bar, if not quite as long, there's a new banquet room (that should also double nicely as a beer hall...), and the industrial ceiling is still in place. The old long bar is now booths, a nice nookish area, and the new bar is simply wonderful.

Beer: there are indeed 20 taps, and 10 of them were lagers (I had two different Braumeister Pils). There were four hand-pumps (I had an Uncle Teddy's). And there is a counter-pressure growler filler, which looks amazing, but it wasn't quite dialed in yet. Another time.

And of course, there was Richard Ruch, famed Victory regular, who appeared to be checking all the seats along the bar, looking for his new spot. When that happens, Victory will truly be re-opened, and things will be back to normal. Great job, Ron and Bill!
Posted by Lew Bryson at 16:45

I'm thrilled it's finally re-opened. I was on rt. 30 just the other night wondering when it would be. I am also super excited about the growler filler! And Richard... while Victory does a good job at knowing your name, that is a place where everyone knows HIS name. I always jockey for a seat in chatting distance. huzzah Victory!

Way to go Victory! Nice job to get all that done AND open on time. Cant wait to see the new digs...I will be there Monday!