I had good intentions ("paving the road to hell," as I like to say) of doing Irish whiskey reviews on the run-up to St. Patrick's Day, but as I've said several times, my health had other ideas. One of the worst colds I can remember laid me and my sniffer low for almost five weeks, and I'm still not completely recovered. But I'm well enough to review whiskeys, so I'm going to go ahead and do the Irish I had lined up, because they tell me that Irish whiskey isn't just about March 17th anymore.

This week it's two from Ciaran Mulgrew's new "The Quiet Man" line, blended and bottled in Derry, Northern Ireland. I talked to him back in January about his whiskeys, which are named for his father, John Mulgrew, who was a "quiet man" behind the bar he tended for 50 years: heard your stories, but kept them to himself. Ciaran's a bit of a quiet man himself when it comes to revealing the source of his whiskeys; Bushmills, given the location of his operation and the 8 year old single malt bottling? Cooley, where they've also done single malt? Neither are selling a lot of whiskey to bottlers. Nothing is confirmed or denied. 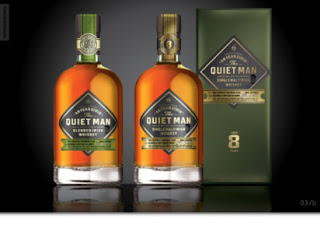 I asked Mulgrew what set his whiskeys apart from the growing flood of new entries to the category. "The Quiet Man is matured in first fill bourbon barrels," he said, "which have had bourbon in them but never any other whiskey. Most Irish whiskey and Scotch is matured in bourbon barrels, but the barrels may have had whiskey filled into them four or five times. This reduces the impact of the wood upon the spirit. In addition, the traditional blended variety has a high malt percentage, making it more premium and giving it a smoother finish."

Mulgrew's not a pro; or rather, he wasn't before he released the whiskey last year. "It has been a long time coming, but this is my first entry into the whiskey market." The Quiet Man is being distributed in the U.S. by Luxco, who should be able to supply fresh bourbon barrels. Luxco is supporting the brand with tastings both on and off-premise; keep an eye out for them.

The Quiet Man Blend, 40%
Quick grainy smell as I open and pour. Sweet grain in the glass, along with penny candies, cornmeal, and orange marshmallow. Quite sweet on the tongue, very Irish in character. Light, friendly, no overt oakiness. Sweet but not cloying, with some light golden raisin fruitiness. Pleasant and approachable; maybe a bit too sweet from the bourbon barrels, without corresponding depth, but a good whiskey for introductions and carefree drinking.

The question would be whether to have this, at a common price of about $35 a bottle, or Jameson/Tullamore/Bushmills/Paddy/Powers at anywhere from $7 to $15 less. This seems a bit pricey.

The Quiet Man 8 Year Old Single Malt, 40%
Hoping for a bit more here. The blend, while not labeled for age, is thought to be about 4 years old. Expecting a bit more structure from an 8 year old single malt. Yup, more oak in the nose; nougat, sandalwood. A lot more oak on the tongue, more of the sandalwood, a nice warm cereal character, as well as a pleasantly oily texture. This has a lot more going on, not simply sweet and fun. If I didn't have more tasting to do today, I'd pour another full measure and just enjoy this one.

Coming up next: Egan's whiskey and poitin.
Posted by Lew Bryson at 12:35