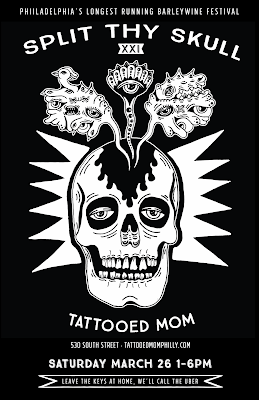 Back in the day...way back in the day, like in the 1990s, one of the premiere beer events in Philadelphia was Split Thy Skull, a barleywine/strong beer event at Sugar Mom's in Old City, originally put on by Philly's pioneer beer promoter, Jim Anderson. For whatever reason, it was always held on the day before Easter, and -- thank you! -- in the afternoon. We'd crowd in the basement bar, eat sandwiches and red beet eggs, and scarf down glasses of beers that started at 7% and headed north from there. That's where I had my first Yards Old Bart, various iterations of Dock Street's barleywine, draft Kulmbacher G'frorns, and Rogue Old Crustacean. That's also where I first met Nodding Head founder Curt Decker, when both of us were "pretty well banged up," as Tom Peters puts it.

Oddly enough, Split Thy Skull was, in a way, the earliest genesis of the Session Beer Project. I distinctly remember supping a glass of cask-conditioned Young's Old Nick barleywine (at a quaintly mellow 7.3%, which would damned near get it laughed out of today's STS), and thinking -- I could point to the spot where it occurred to me, it's so sharp in my mind -- 'My God, this is so good; I wish it were about 3.5% so I could drink it all day.' The seed of an all-day drinking tasty beer was planted, and would come to fruition years later.

But enough history! Because tomorrow is Split Thy Skull XXI, to be held from 1-6 at Tattooed Mom, 530 South Street, and as always, it's gonna be a doozy. It's PAYG, with singles and flights, from over a dozen big fat beers of all types (and I hope some true barleywines are among 'em!). They don't usually release a list until the actual event, but they slipped me a few names that will be there. Check it: Pizza Boy Wonder Whine (12.5%); Southern Tier Back Burner (10.5%); Alesmith Old Numbskull (11%). Woof!

So...get on your bike, call up Uber or Lyft, take the bus, or get a friend to pick you up when you're done, because if you do this right, you'll be done. Not sure if I can make it this year or not, but if I see you there...Cheers!
Posted by Lew Bryson at 10:53