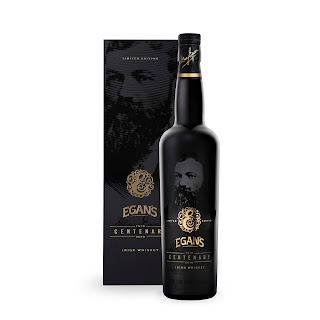 As I mentioned, I'm getting through a bunch of samples that came in while I was sick. One of those is today's Egan's Centenary Irish Whiskey, packaged in a stunning black bottle (one of 5,995) with the image of Henry Egan on the front. The Centenary marks the 100th anniversary of Egan's passing in 1919; he was the co-founder of Egan's maltings and distillery.

The other whiskey I'm tasting today is one that just came in on Tuesday, Kilbeggan Single Pot Still Irish Whiskey. It gets to jump the line because, frankly, the first Kilbeggan Small Batch ('Not a Single Pot Still Because The Law Is Stupid And We Put Too Much Oats In It') (my name, not theirs!) was so damned good, well, I didn't want to wait. So let's see if it was worth it.


Egan's Centenary 46% -- It's a blend of Irish single malt and single grain whiskeys, finished in XO cognac casks of French oak. Egan's is an old name in Irish whiskey (their malting house still stands in Tullamore; see to the right), but they've been quite open that this is sourced whiskey. The whiskey is non-chill filtered.

The nose is so rich you could live off it. Plentiful fruit: golden raisins, pear, quince jam. Cookie sweetness, sugar cookies with fresh raisins on top. The barest hint of oak, but that hint is stern; this far, and no further, it says, you'll not get anything more until you tilt the glass and taste it. That's not fiction, folks, it's what this whiskey speaks to me.

Taste it, then. The oak blooms on the palate, and you can see what you have from it. It's a banquet the oak has spread, on a firm, wide oaken trencher. Taste that fruit, taste the sweet cereal, and get the French oak all through it, a beautiful integration. As we come to the finish, the oak flexes, takes control, and lifts you into a long embrace. This is quite fine and pleasant.

I have come to believe that there is something about Irish whiskey and Cognac wood that is especially suited. I'll be looking for more like this. 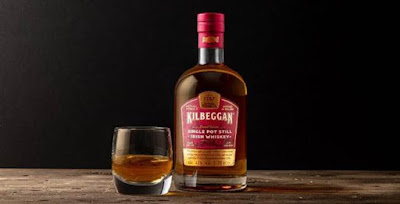 Kilbeggan Single Pot Still Irish Whiskey 43% -- Double distilled, and proud of it. 2.5% oats in a mixed mash of malted and unmalted barley, and damned proud of that. Kilbeggan is testing the boundaries with some whiskeys that were tested some years back. I can only hope that the results encourage them to continue, because as I said above, the earlier release was just brilliant. I have high hopes for this one.

Quite a different nose from the Egan's. This is edgey, brittle, with a daring conjunction of sweet hard candies -- spicy Christmas candies, fruit pastilles, herbal lozenges -- and a dry minerality. As it warms, the fruit candy is transitioning to fruit puree: berries, crisp nectarines. It started off a bit sour, but quickly became sharp with berries.

Let's try this. Wow. So different from the Egan's malt and grain: this mixed mash single pot is singing and stinging; this is a lot of flavor, barely restrained. Oily fruit and a fresh grassiness spread on the tongue. I'm used to creaminess in beers with oats in them, and I'm wondering if that's what I feel here. But the oak puts some straight edges on the sides, and lays some tannin down the middle, which keeps the sweet fruit in check. The finish is there before you know it, oaky, sweet, and there's the fruit...but it's all fading away, like the end of an amusement park ride, slowing to a stop, and do you want to get in line and go again?

This is what I liked so much about the previous Kilbeggan Small Batch: excitement. Every sip of this is like when I'm sight-reading a fast piece of music, but doing it well: I'm barely staying ahead of the flow, but the music is so good, so well-written that you don't notice the effort, just the joy of the ride...and you're breathless and grinning at the end.


Coming up: beers, at long last.