I live near Newtown, Pennsylvania. I tend to tell people I live in Philly; if they're familiar with it, I say northern suburbs; if they ask where, I usually say "Langhorne," because that's my mailing address. But I don't actually live in Langhorne, and we do almost all of our grocery shopping, hardware store runs, takeout food pickup, and post office stuff in Newtown, I go to church in Newtown.

So a brewpub coming to Newtown, finally, after almost 30 years of living here, is a Big Deal. (No offense to Newtown Brewing, but a tasting room isn't the same as a brewpub.) It's even better that it's an Iron Hill. I've been pumped ever since I heard about it. And when I found out that the brewhouse was arriving today, well, I wanted to go see.

At least it wasn't raining or snowing. Pretty gray day, but the team was already at work when I got there, just taking the first bright tank off the truck. "The team," by the way, is all Iron Hill brewers. They get certified on the equipment, and rig it all. They knew I was coming, greeted me, got me in a hardhat and blaze yellow vest ASAP, and I was introduced to the new head brewer, Pete Corbett.


Pete was the brewer at Iron Hill North Wales before. But Newtown already knows him, and not because he already lives in Langhorne. Pete grew up here; he's a Newtown homeboy. "I graduated from Council Rock [high school] in 1997," he said, and grinned. "Back when it was just Council Rock." He was referring to the school district having split into CR North and CR South.

It's not the first time he's worked here, either. Pete originally trained as a chef at the Restaurant School in Philly, and did his apprenticeship at the Brick Hotel here in Newtown. He also tended bar at Marita's Cantina (where El Barrio is now), which means he probably served me a few beers over the years. Funny how things work out. Anyway, after some more cooking ("I still like to cook, but I don't know how chefs do it. I burned out.") he turned to bartending, which is how he wound up at Iron Hill, six years ago.

He worked his way up to brewing from serving, which is The Iron Hill Way. "I loved bartending, but homebrewing was a passion," he told me. "Then one morning I woke up, and realized I needed a career change. I didn't want to be a 60 year old bartender. I could be a brewer! It's like that old saying, love what you do, and you'll never work a day in your life."

Pete started sticking his head in the brewery whenever he could. His homebrewing was getting better, and he won an award with a Belgian type ale he did, Blame It On The Dog (and that's a homebrew name, right?). Iron Hill encourages homebrewing by giving employees free grain, hops, and yeast; "All I had to provide was the equipment, water, and propane," Pete said.

Then Iron Hill had a contest: the server who sold the most mug club memberships got to brew a batch on the house system, to be sold at the brewpub. Pete was motivated, sold like mad, and won. When brewer Doug Marchakitus told him they'd have to come up with a recipe and formulate it, Pete handed him the recipe for Blame It On The Dog, already scaled up. Which kind of made today inevitable, in a way.

Because today is the day that Pete Corbett takes over as head brewer at Iron Hill Newtown. He's running the brewery now, and no longer making the commute to North Wales. "It's only 15 minutes, and no tolls!" He told me with positive glee. 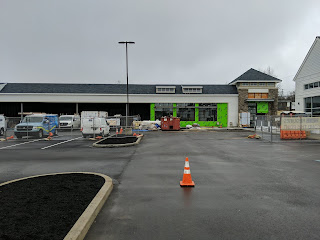 The beer list will have the signature Iron Hill beers like Light Lager, Vienna Lager, Philly Special IPA (a New England IPA, but we beat New England, so it's a PHLIPA), and Pig Iron Porter, but the wheats will be called Farmhouse Wheat and Farmhouse Berry. There will also be about a dozen specials. "I'm opening with a South Eagle IPA (the brewery is on South Eagle Rd.), and the Russian Imperial Stout," Pete said. "We always have five different IPAs on, a fruited sour, a pale lager, a second dark beer. Always two seasonals: I'll be opening with Lemon Cerveza, a Mexican-type lager with lemon juice and zest, not overpowering. And we'll have our Rivet Hard Seltzer, on draft." (Yes, I winced, but I did say brewpubs were different.)

The Iron Hill menu will be largely the same -- all made from scratch at the Newtown kitchen -- but there will be some changes. The menu's gotten a bit long, and they'll be trimming a few items. There will be a beer garden behind the brewhouse (away from the plaza), and roll-up windows in the bar area, which sounds wonderful.

Pete said they're currently on schedule for an April 29th opening, just two months away. If you're looking for a job, be aware that Iron Hill standards are high, and the training program for servers is intense. It works, though: service levels at Iron Hill are high. "That's the Iron Hill Way," Pete said. "Don't cut corners, no doing anything half-assed. Quality is the most important thing."


I haven't written this kind of "a new brewery is opening in our town!!!" story in decades. I realize it won't be of much interest to most of my readers, but I'll tell you: after 30 years of waiting, it's pretty exciting for me.
Posted by Lew Bryson at 17:38

Congrats on the soon-to-arrive brewpub! And congrats on the new book -- it is fantastic. The explanation of what oak adds from new and once-filled barrels to the flavor was super-helpful. I'll be returning to it over and over.

A question: You had that sidebar on when rye is spicy and when it isn't and suggested as a test to prove rye isn't spicy would be to bake rye bread with no added spice. Is it possible that some folks (raises his hand) just perceive the rye grain as "spicy"? I bake bread weekly; often with rye flour. The first descriptor that comes to mind is "spicy." Rye bread to me reminds me of how my parents' spice cabinet smelled: it's not pepper, it's not paprika, it's not clove, but it is some generic spice-ish-ness. I wonder if this is in the same category of folks who taste soap in cilantro -- to some of us, rye is spicy, maybe. I have had rye whiskey with no spice (Koval is mostly mint and medicine, say), but as food and beer, I get spice.

And I did not know (or forgot?) that Penderyn saved your life -- would you be willing to tell the story?

Your book helped me get trough a bad case of the flu, flu shot notwithstanding, which meant I couldn't sip alongside it, but will definitely revisit parts with the appropriate drink in hand! Thanks!

Next...there's an oiliness to rye, a kind of bitter thing. Is that it? I smell that in rye bread. It's so hard to describe a smell that's singular, but there IS a smell to rye that's not related to the yeast reaction.

Oh, and heck, i actually commented on that story back in the day... thanks!

I can get oiliness in its liquid form (I assume that was contributing to my dislike of bourbon in my college days decades back when my choices were basically Old Grand-Dad and Jack Daniel's), and bitterness make sense, but I just wonder if a bunch of us taste spice. In the mid-aughts, that was always a debate on the RateBeer/BeerAdvocate forums -- folks insisting rye in beer was spicy (and not caraway or dill) and other folks saying they were full of it. Well, I guess it's a reminder that we all don't taste the same things.