Integrating the Party: tasting The Balvenie Tun 1509 Batch 6 (plus Batches 2-5), with David Stewart

I got a couple extra samples of The Balvenie's Tun 1509 on the occasion of the release of Batch 6 of this series. It wasn't really supposed to happen that way, but fun things sometimes come along. I'll quote from the release:


The Balvenie has announced the release of Tun 1509 Batch 6, the latest expression in the highly acclaimed Tun 1509 series. Produced by revered Malt Master David Stewart, The Balvenie Tun 1509 Batch 6 was married in 21 rare and precious casks from The Balvenie’s aged whisky stocks and comprised in several different butts, for a remarkable flavor profile and finish.
A marriage of 21 casks which have spent 3 months in a traditional marrying tun. The batch is comprised of whiskies from sherry refill butts, doublewood refill sherry butts and ex bourbon American oak barrels - all aged 21 years and older. Only 3480 bottles released in the U.S. Non chill filtered, ABV of 50.4% (MSRP $399.99) 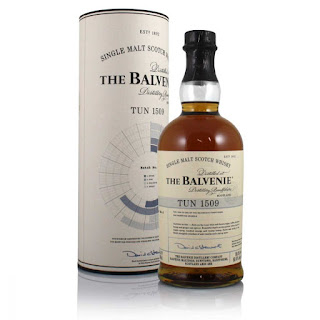 When I read that, I thought...wait a sec, I think I saw some early Tun 1509 samples when I was shifting bottles about in the Bryson Whiske/y Cellar (i.e., trying to make some room in my basement office). I went down and dug around a bit, and sure enough, there were samples of Batch 2 and Batch 3. So I replied to the press release, telling them I'd like to have a sample of the 6 to taste beside my earlier samples. And didn't the good folks at William Grant & Sons send me samples of Batches 4, 5, and 6! (Samples: 50 ml airline bottles. Unlabeled. Hand-filled. Not for re-sale. Which is fine with me, I don't do that shit.)

Better, they sent responses from Malt Master David Stewart to a couple questions I had posed. Let's have a look at those first.

What's going on in the Tun over the course of weeks and months that doesn't take place as soon as Tun is pouring in the barrels? Physically, how is the liquid added to the barrels? Gently? With a lot of splashing? One at a time? Does that also make a difference in flavor and profile?

David Stewart: We generally fill the Tun with the next expression around December each year so that we are in a position to bottle the following spring. Once we have emptied the Tun we will then fill with young Balvenie so that the Tun doesn't dry out. The Tun contents, as you mentioned, is filled into barrels to be taken to our bottling hall. From there, we carefully fill these barrels one at a time so that we don't lose any of this precious liquid; so that filling the barrels doesn't influence the flavour.

How does the character of the whisky change, and – if it's known – why does it change? Does the marrying process add to the cost of producing the whisky, or is it just another step? When you choose the barrels for Tun 1509, are you looking for consistency with previous editions, or a difference? How much of a range of ages in barrels are we looking at this time?

David Stewart: We are the only Scotch whisky company that has these marrying casks called Tuns. Most of our single malts are left to marry in for a period of three months prior to bottling. This marrying period allows the various constituents to mix and settle together. We have many thousands of these casks in our marrying warehouse at the distillery and we feel that this process is valuable; even with the extra labour and double handling involved.
The selection of each Tun expression is created initially in our sample room. We will request many samples to be drawn from individual casks from our warehouses at the distillery. We will sample each individually and then decide on the combination of ages and American and European oak casks. Once we made up the vatting in the sample room, we compare it with previous Tun expressions as we want each one to have its own individual character. Once we are happy, we give the distillery the cask numbers and ages so that they can physically fill the Tun. Generally there could be around ten years or so between the youngest whisky and the oldest.

Is there something that makes this particular batch of marriage special?

David Stewart: Yes, Tun Batch 6 was created by exploring the Speyside distillery’s aged and precious stocks to find 21 unique casks to marry the batch in. The liquid was left to marry for three months before being bottled at the distillery. This rare technique created the perfect environment for the different casks to weave together – allowing each of their composite qualities to mix and create a unique single malt Scotch whisky.


To be honest, not quite the in-depth responses I was hoping for, but that's what I get for sending questions by email! Let's move on to tasting these whiskies.

The Balvenie Tun 1509 Batch 2 (50.3%): A nose of orange slice candy, some oaky spice, a whiff of pine needles, and warm wildflower honey. The whisky on the palate reminds me of the Parker Beam quote I always use ("I make it with corn and age it in oak, and when I taste it, I taste corn and oak!"): I taste malt, and I taste oak. Open the mouth and breathe, though, and the whisky lights up with a cooling touch of menthol, dark brown sugar, more orange honey, and a hint of dried fruit. The finish is more oaky, touched with vanilla and spice.

The Balvenie Tun 1509 Batch 3 (52.2%): Noticeably softer, sweeter nose. Malty, pastry shop (German pastry shop, to be annoyingly specific), sweet dough, light wood (balsa? Maple?), and a hint of cough drop. Don't be lulled by that. Quite spicy on the tongue, but sweet, warm, herbal, and tall, very tall in the space. The finish is quite warm, a touch tannic/grippy, and more of that oaky spice. A dram that delivers a lot more than that relatively unassuming nose promises.

The Balvenie Tun 1509 Batch 4 (51.7%): Fruity nose, with a sugar wafer cookie crunch to it. Dried fruit, light aromas of potpourri, and some light preserves, like quince, or pear. Sparkly on the palate, like little pops of warmth going off. More of the potpourri, deeply dried fruits, some milk chocolate and honeycomb, with drying oak spice lightly present. Like polyphonic music, there's a lot going on here that seems at first to be going in different directions. But on third or fourth sip, you realize it's integrated and aimed. Indeed, this has the most focused finish of the three I've had so far: oak, vanilla, and a touch of dried flower.

The Balvenie Tun 1509 Batch 5 (52.6%): Nose hearkens back to Batch 3, but with more insistence. Honey-soaked phyllo, almost like baklava but not as overtly nutty. There are fruits, but so light that they're almost floral, and with just a slight acidity. Oh, beautifully light on the tongue! Honey, and honeysuckle nectar, and bright sun-warmed spring flowers, and ichor! Makes me think of a line from a favorite poem from my childhood, "The Fish," by Elizabeth Bishop:

And as I let this fish go, it rewards me with a finish that flashes sunshine and glory from my teeth down my gullet all the way to the pylorus. Sorry to be so non-specific about exactly what I tasted here, but damn, it was just so experiential.

The Balvenie Tun 1509 Batch 6 (50.4%): Finally, the reason for all of this. Warm cereal nose, with fruit; almost like breakfast, only with the booze heat turned on, and some oak in there. There's a welcoming malt wave that pours across the tongue, then as the heat of your mouth takes hold it ignites like an oven burner coming on. You can almost feel the whoosh! It wasn't just the first time, either, it keeps doing it every time. Guy could get to like that. What's in the whoosh? Reconstituted dry fruit, lively, but still with that concentrated character. The warm cereal, only in a ladle instead of a spoon. Needling oak shoots through it like a strafing run, but the cereal cushions it. The finish rolls on and on, with the oak finally getting a real say, wrapped in vanilla and more fruit, and some solid heat there on the end.

Interesting, varied whiskies. As I like to point out to people who are obsessed about the exact percentages of a bourbon mashbill (hint hint: this is a Whiskey Master Class reference); Scotch whisky has a very simple mashbill -- 100% malt -- and the distillers manage to make quite different whiskies with it!

What does the Tun bring to that, what's the common thread here? Upon reflection, I believe Batch 4 is the key to that: integration. The Tun, and the marrying, brings integration to what could have been an out of control mess of flavor. Things aren't hammered into lockstep, overpowered by a huge first-fill character. They're introduced to each other, given a chance to cooperate, without losing their personality. It's like Richard Paterson's characterization of blending whiskies as putting together an invitation list to a good cocktail party; some authors, some actors, some bikers, some doctors, a few blue-collar poets, and a supermodel or two.

Marrying is a process that adds cost to a whisky. But it also adds strength, union, roundness, integration. It's a decision, and a powerfully subtle tool in the blender's kit.

That was a lovely two hours. My thanks to David Stewart for the work on this project over the years.
Posted by Lew Bryson at 09:02