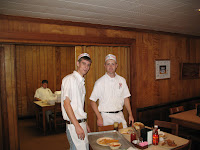 It was a long night till I was hungry again after the gut-stuffing at Parker's: minced pork, Brunswick stew, string beans in pot liquor, hush puppies, fried chicken....Damn. And those boys at Parker's stand ready to get you more, more, more. God bless 'em, even if they don't have beer.

But Tyler's Taproom put out a spread for the World Beer Festival's brewer's reception: salmon spread, shrimp, artichoke dip... what the hell? No 'que? I dipped a bit, but mostly drank: Bell's Two-Hearted, Sierra Nevada Harvest, Big Boss Surrender Monkey (and the oak-aged Surrender Monkey, which was a totally different, totally excellent beer), and BridgePort IPA, an unexpected pleasure. Tyler's did have taps o'plenty, and good stuff, but short on dark beers, which hurt. 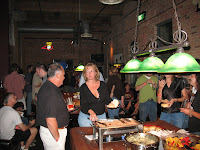 Then about 9 PM they suddenly brought out a tray of sharply vinegary 'que, and I grabbed my glass of New Holland The Poet Oatmeal Stout, shouted HOORAY!, and grabbed pork. Mmmmm, baby. Beer met pig and rejoiced. Vinegar melted into rich pigmeat and thoroughly mellow malty/bitter stout, and all was good. A soothing wrap for an acidic/meaty mix.

So what do we learn? Couple things. First, NC is a great place for barbecue. Hell yeah. Second, NC is not a great place for beer and food (but you can sneak around it sometimes). That sucks, truly, and the whole "family atmosphere" thing is crap that needs to be addressed by beer drinkers: it needs to be proven that "beer with dinner" clearly does not mean "drunks with dinner." Sanctimonious weeners.

The prime lesson, of course, is that it's a good thing to put the right beer with your chow. It can really make things better, more clear, maybe even synergistically delish. It can help the beer or the food or both.

Email ThisBlogThis!Share to TwitterShare to FacebookShare to Pinterest
Labels: barbeque, food, The Session

it needs to be proven that "beer with dinner" clearly does not mean "drunks with dinner." Sanctimonious weeners.

I couldn't have said it better myself. For the life of me I'll never understand why the general perception of beer/food is "drunks" while wine/food is perceived as "highbrow". Then again, I like to think that I'm not a "sanctimonious weener". I'm not "highbrow" by any stretch of the imagination.