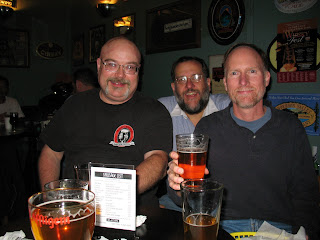 We've arrived in San Francisco for WhiskyFest; got in last night, actually. We got to the Hyatt at 6:10, and by 6:50 we were on our way to the Toronado, which is, well, one of the best damned beer bars in the country. At least, I'd been told that, and had no reason to doubt it, but...I'd never been. So we went.

And we did get stuck into it. That's Toronado owner Dave Keene, me, and Malt Advocate publisher John Hansell...well, last night John wasn't the publisher. He was a guy who'd been going to Toronado for years, hanging out with his buddy Dave. I was lucky enough to tag along.
I was also lucky enough to be in time for dinner from Rosamunde's Sausage Grill next door. Oh, God, yum. Dave and John each got their beer sausage, Cathy had a duck sausage (with figs), I had a merguez (smoked lamb and beef), and Jim McGinley (husband of our magazine manager, Joan) had a hot Italian. I had a bite of Cathy's, and I can definitely report that our two were superb. Gawd. Two landmarks I definitely wanted to visit, down in two hours. Rock on!
Before anyone thinks this has turned into "Seen Through A Big Piece of Meat," let me say that the El Toro Deuce I started the evening with was great: hoppy and fresh, not overpowering. Then we had glasses of the Toronado 20th Anniversary that Vinnie Cilurzo had brewed at Russian River, and it was arresting: sour, deep, with a deftly woven character of oak and teasing sweetness that grew towards the end of the swallow. I also had a Moonlight 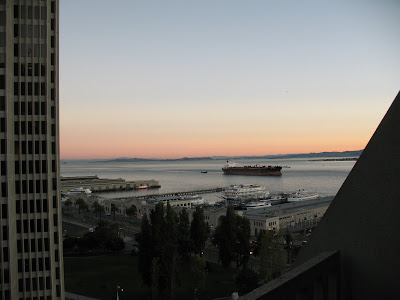 Sublimmminal IPA (I think that's how they spelled it) from the cask (four handpumps, BTW: all pouring): an interesting project. Dave said it was all mash-hopping and dry-hopping, no hops in the kettle. Very good, and quite drinkable. A sip of John's Blind Pig IPA (Russian River) brought back memories of this beer from GABF in 1996, wow. It's a shame this beer gets overlooked in the rush to the Pliny's.
Wow. So now Cathy and I are in our room on Monday morning, ready to head out. This is the view, a picture I just took a minute ago. We're going to walk for about an hour, have breakfast, and do some sightseeing: tour of Anchor Brewing at 1:00, meeting a friend for beers at 5, and then going out for a big staff dinner. Should be fun.
Posted by Lew Bryson at 10:01

It's the best IPA on Earth. Or any planet for that matter.

(Hey Lew! Hope you are doing well. Tell everyone there I said hello, and also give John and Amy [aka mom and pops] a hello for me too!)

Oh, we are having fun, Shannon! Hello to you too!

Rosamunde & The Toronado are perhaps the greatest one-two punch on the west coast. Glad you got a chance to go. And you're gonna love the Anchor tour....