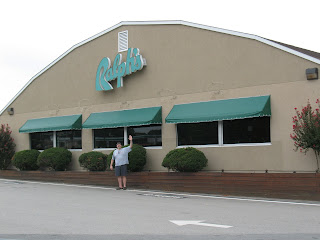 et to a WiFi. Sorry not to have put these up in real time, as planned. We're in our room in Durham now, and I'm writing.

Carl and I decided to go for BBQ greatness by going down I-95 to Wilson, and then west across Rt. 264 to Durham. We started lunch, pre-lunch, with some minced pork and slaw at Ralph's in Roanoke Rapids. We checked Ralph's buffet, found it impressive, but offering too much variety for our plans for the day: "This is a marathon," Carl observed. "We need a longer-term strategy." So we got takeout, and enjoyed it in the parking lot with another Saranac Ofest.

Damn me if it wasn't good: the mellow pork, the sharp vinegar/pepper dressing/sauce, and the roundly sweet Ofest. We were disappointed by a lack of smoke in the pork, but weren't about to let that stop our enjoyment. Rain poured down as we passed the slaw and pork and beer back and forth; roaring on the roof at times, gently dripping at others. The mustardy slaw, the pig-sweet meat, and good beer...NC BBQ joints don't really go for beer, you gotta grab it, and it's worth it, and, well, maybe it's sweeter for being slightly illicit. (I had the keys on the dashboard the whole time, BTW; might as well be obviously not drinking and driving.) 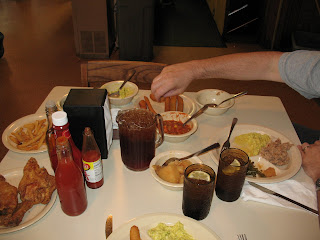 We went on down to Wilson, and stopped at Parker's, and ate a big feast...with no beer. Food...with no beer. This was really good, but a big mug of beer would have been better. It yanks me when I can't have a beer, when I'm not allowed to have a beer with my dinner. It rankles me when the New Drys say "You don't have to have beer to have fun" but they won't go with the converse, which is "You don't have to be abstemious to be virtuous." Jerks. Pass me another bowl of minced pork, willya?
Posted by Lew Bryson at 00:33

welcome to the Bible Belt, Lew. Having lived in the middle of it for years (thankfully no longer, I can attest and testify to the Dry nature of the area.

An awful pile of those "Family friendly" places down there, couple of catfish shacks as well that would have been good with a beer but had to 'settle' for "southern style" tea (super sweet).

So, sounds like a big time down there, even with the dry spots.

I'm down in Richmond, VA right now and have Legends, Richbrau and Capital Ale on my radar.

I stopped at Dogfish Head on the way down and was in heaven, I even liked the IPAs they had (30, 60, 90 minute). The Chickory Stout was delish (my wife who doesn't like dark beers loved it). Food was outstanding as was the distilled spirits.

They have a pear infused vodka that I thought I'd let you know about since you love pears (you probably already knew that, but..hey why not let ya know..) I bought a bunch of it and can't wait to sip it with a friend of mine back home.

Also hit DuClaw as well, damn they were also fabulous, especially the Toffee Nut Brown Ale. I can see why its your fave.

Finally, (sorry to be a pain in the ass and blather) but I was told that in Richmond, the best 'Que place is Buz and Neds, gonna hit it later, wondered if you'd ever been?

Sounds like you're hitting the high spots, Bill, but don't overlook the funkiness of the Commercial Taphouse in Richmond: small, cool atmosphere, and a smaller but well-selected tap rotation. If you've got time, it's a good one. Glad you liked DFH, that's a great place, and DuClaw just does not get the wider recognition it deserves, IMO.

Buzz & Ned's is the hot ticket; Carl took me there in the Spring, and it was delicious. Be sure to try the sauces!