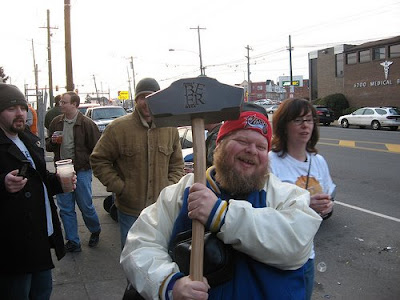 Gary Bredbenner died last week. Uncle Jack did a very nice post on it here, and there was a wonderful obituary in the Daily News yesterday.

I don't know if you knew Gary, but if you've been in the Philly beer scene for any amount of time, I know you've seen him. Short, round, always smiling, Gary was hard to miss: he was the guy with a beer in his hand (at least one beer, sometimes two) and usually had the best food in the place in his other hand. He had a nose for it. He was a very generous guy with beer and food, too, a real embodiment of the best of the craft beer community. If he knew about a great place to get good beer, he let you know about it. A very friendly guy, even if he did describe himself as "An Evil Fat Man," grinning all the while, referring to his way of tempting people to indulge themselves.

But you can read about Gary in those places up top. I wanted to tell you about how we buried him yesterday, on a sunny green hill above his hometown, and about how we said good-bye to him in just the way I think he would have wanted.

The news came last week from mutual friend Dan Cosper, and shortly after Dan sent out information about the funeral plans for Monday in Danville, I got a call from Rich Pawlak. "Got the news on Gary. We goin'?" I had to stall him off, because I knew I had work, and would have to re-arrange my schedule, but I also knew that I was going to do it. Sunday afternoon I called to confirm, and we arranged to meet early Monday morning to drive up.

Rich came by a bit before 8 and we left. It's about 2.5 hours to Danville from my house, and we talked about Gary for most of it. We got to the funeral home about 10:30 and paid our respects to his dad, Gary's only surviving immediate family, a sad and tragic thing. Gary was laid out in jeans and a Phillies World Series champs t-shirt, with Eagles and Phillies clothes about him (and a Grey Lodge t-shirt; Gary was a regular), a homebrewed bottle of "Batch #1" from "Big G Brewing" tucked in at his feet. It was only the second time I've ever seen him that he wasn't smiling.

We sat down with some of Gary's friends, and talked. Some sad stories about his last day, and some happier stories about his life and our friendships with him; like any good funeral. Rich and I were glad to see a good turnout, including people from Gary's work, neighborhood, and family. The minister from St. Peter's United Methodist spoke, and talked about Gary's loves: beer, food, the Phillies and the Eagles, Metallica, science fiction films, Transformers. He talked about how he was well-regarded at work, traveling around the world to fix computer problems. He quoted John Lennon and Jim Morrison. (He looked like a tall Jerry Garcia, which provoked some stifled giggles in the back of the room.)

Then it was time to go. We said good-bye, one last time; I prayed that Gary could always be smiling. They closed the coffin. Rich and I volunteered to be pallbearers, and eight of us picked up the shiny gray casket and carried it carefully out into the bright sunshine and placed it into the hearse. We got in our cars, and drove about half a mile to the Odd Fellows Cemetery.

The cemetery occupies the side of a hill facing away from the East Branch of the Susquehanna River, looking north to tree-covered ridges. The sun was high enough that the grass around the graves gleamed green. White clouds slowly passed overhead, billows and wisps, streams and towers. Helicopters from nearby Geisinger hospital buzzed overhead, and we joked that the Philly news stations had sent them for coverage. I silently wished to myself that I would have as good a day when I go. There was a short service, a lot of hugs, and we left for the church.

The church ladies had a small luncheon prepared. Gary would have been disappointed in that there was no barbecue, but I know he would have been happy about the sides: two delicious salads (potato and macaroni, with big chunks of hard-boiled egg and olives) and calico beans. There was also chocolate cake with peanut butter icing that never came out of a box; moist, solid, not too sweet, just toothsome stuff. We talked a bit more, I thanked the church ladies for the macaroni salad, and we left, in the midst of a short, cool summer shower.

We had one more memorial to make. We drove over to One Guy Brewing; it was closed on Monday, but not for friends of Gary. Guy Hagner had been at the funeral, too: Gary loved his place. The picture below is Gary at the One Guy opening (note: two beers!). Guy left from the funeral home and went back to heat up his pizza oven. Eventually a dozen of us made it. Guy brought out some poignantly delicious pizzas -- thin-crust, but chewy, lightly-sauced, just-picked basil, thick-cut local pepperoni...my God, when will the PLCB relent and let this man serve his public?! -- made sure everyone had a beer (with help from his quite competent son, Matt), and we toasted Gary. Not with sips, either! 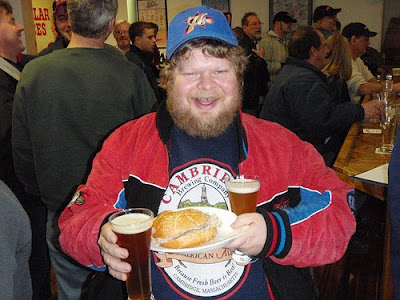 And we went home. My good friends: if you have the funeral Gary Bredbenner did, with the genuine love and emotion his friends had for him, you will be well-dispatched from this world. Gary leaves behind scarcely any family, no great achievements, no lasting monuments. But his smile made him known to everyone, his enjoyment of life's simpler pleasures was an inspiration, and his passing was a cause for a celebration of his life. I know he'd much rather have stayed around for another beer, and another rack of ribs. But if it was time to go, it must be nice to see how the wake went. Go with God, Gary.
Posted by Lew Bryson at 10:40

Email ThisBlogThis!Share to TwitterShare to FacebookShare to Pinterest
Labels: deaths, friends, One Guy

Wow. That nails it so well.

I did not know this man, in fact, I have never heard of him either, but it sounds as though he was the type anyone would have called a friend. As I get older i find myself reflecting on some of the themes in your piece: This was a man who was clearly loved by many, but as you state left behind no immeadiate family. At what point does one determine the difference between having no one in the world with which to share the things you love, while at the same time having everything one could ask for?

The obituary said he was predeceased by a brother and sister -- my heart goes out to his father, who has seen all his children pass on.

Gary definitely had people with which he could share the things he loved; they may not have been in his home or his immediacy, being in various places instead: his neighborhood, the Grey Lodge, Lincoln Field and Citizen's Park, the traveling feast that is craft beer in Philadelphia, IBM, and online. There are still bachelors among us, men and women who live their lives, oftentimes quite happily. No man is an island, but not all of us live in a walled city of human bonds, either. Gary shared everything, and that's why his passing was so deeply affecting.

I had met Gary in March at the Opening Tap and later that week saw him at Firkinteenth. My memory of Gary will stick with me forever. My group was outside and he had just come out with a gentleman who had the HOG. We began to pass it around and Gary was there to get a pic of everyone there with the Hammer. He waited for everyone to go before he had that shot above taken of him. Then as the pictures came to an end he went back in and then came out to tell all of us outside that they had just tapped something really good. He was never selfish and he sure knew his beer!
Rest in Peace Brother

Lew, you said: >>>Gary leaves behind scarcely any family, no great achievements, no lasting monuments. But his smile made him known to everyone, his enjoyment of life's simpler pleasures was an inspiration, and his passing was a cause for a celebration of his life.<<<

Seems to me Gary left some pretty damn good monuments behind. As long as anyone out there remembers him, he won't REALLY be dead. At least not in your hearts and minds.

This is one of the GREATEST things you have ever written. He would be so proud!

Thanks, Rick. I tried to get all of the day in there, because I knew a lot of people couldn't be there with us. And because I don't want anyone to forget the beer elf.

Thank you Mr. Bryson for the lovely moving tribute to such a real and geniune person!

He truly embodied the theme that "good beer is good people." We talked and share beers at a number of GL and other beer events over the years. His smile was truly infectous.

Thanks again for sharing your thoughts about Gary.

Well put good man... Hope we all are as fortunate to be sent off as appropriately. Cheers.

Never met the man but his smile says it all, the world needs more people with a reason to smile. He will be missed.

There are people with tons of friends and family, awards and honors, accomplishments big and small, that never make the kind of impression on strangers and casual acquaintances as you friend Gary seemingly did.

I believe that a good eulogy/tribute should not only honor the life of the deceased, but teach a lesson to survivors. This one certainly did.

I didnt know Gary well but it seemed every time I went to TGL he was there. He loved to talk to Carolyn and I about his hometown area since he knew we love the area as much as he did. SGB, Old Forge, One Guy, Bullfrog....he loved to chat with us about them all and of the interpersonal relations we had with the people there.

My last memory of Gary was fittingly from the X-mas in July at TGL! I brought down a growler of Troeg's Scratch 19 to share with any and all. Of course Gary was all over it and VERY thankful for the opportunity to gain a little experience with a new beer.

Rest in peace Gary....may your stein always be full!