Beer at the White House: it's the glass, stupid 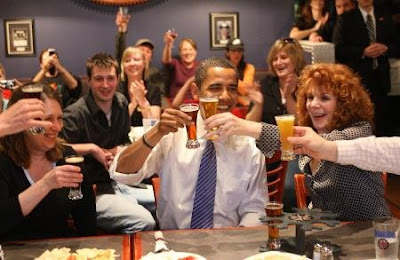 What the hell does it matter?

I'm sure you've all heard about the Race and Beer Summit to be held at the White House today: the President invited the Cambridge cop and the Harvard professor to hash things out over beers at the White House. If you don't know the details, Google it (and get a life, will you?).

And now there's a lot of silly-season nonsense about what beers are being served. They're not craft, they're not American-made, they're elitist, they're too common, they're stereotyped...

Has anyone noticed the calendar? It's that time of year when bullshit creeps onto the front page. It doesn't matter what beer it is: it's beer. Pete Brown nailed this last week, noting that this acknowledges that "beer is the most sociable drink in the world," then going on to say, quite correctly:

I don't give a damn whether he serves them Bud Light or Dogfish Head 120 Minute IPA, Corona or Samuel Smith's Oatmeal Stout. In one sentence, he's said everything I tried to say in Three Sheets to the Wind, and said it with a gazillion times more impact.

Bingo. Which is why I have had nothing to say about this, about what beer I think they should serve (here's a thought: how about some beers the participants like to drink), and only decided to say this when I read this blather in the WSJ today (thanks to Sam K, who sent the link). Go read it; I'd quote from it, but everyone sounds so dopey I'd hate to slight someone by not exposing their ass.

Actually, I will quote White House spokesman Robert Gibbs, who was one of two people who made sense (the second was Harpoon prez Dan Kenary, who tried to get his beer in, failed, and gave up, noting "I think just showing up at the gate with a case of Harpoon would make them look at us funny."):

"As I understand it -- I have not heard this, I've read this, so I'll just repeat what I've read, that Professor Gates said he liked Red Stripe, and I believe Sergeant Crowley mentioned to the president that he liked Blue Moon. So we'll have the gamut covered tomorrow afternoon. I think we're still thinking, weather permitting, the picnic table out back. All right?"

Sounds good to me. Beer is at the White House. Again. That should have been enough. Crying that it's not your beer, or the right beer, or an American beer is silly.

Well put, Lew. Personally, I think it would've been funny if Obama went with Avery's Collaboration Not Litigation Ale, but obviously that has nothing to do with the beer itself.

I'm with you on this one, Lew.

I have to agree here: Anything that puts beer (whatever beer it happens to be) in the news and the whitehouse of all places is positive for beer in general. I wonder if the craft beer folks who are vocal about the choices would have had a problem if one of their favorite beers was something funky and Belgian? Not American, but not macro either.....

Every brewer would like their beer showcased at the White House but it's not the brand that is important. What makes me happy is that after so many years of Presidents who would not or could not appreciate the importance of beer we now have a President that uses beer in a constructive way. To paraphrase...Relax, don't worry, just have a beer!

If they really wanted to get something done, they'd serve bourbon.

That's right, Jim: candy is dandy, but liquor is quicker!

Well, my vote is for Stone's Arrogant Bastard, but they'd need more than one bottle.....

At least he's not this guy (quoted from the same WSJ article Lew linked to above):

"In the George W. Bush White House, a favorite chocolate dessert was referred to not as a French-style soufflé, but as a "chocolate freedom.""

C'mon. I didn't sound dopey! (And by the way, the prohibitionist protesters are already out in front of the White House.)

No, Maureen, you most certainly did not sound dopey! You brought up a good point, and I'm shocked there hasn't been more New Dry chatter about this; maybe it's just been drowned by the chest-pounding of Arrogant Bastard supporters.

The WaPo asked me to write an oped piece about it, so that'll be out Sunday (unless, ya know, war is declared or something between now and then) -- and in that piece, I tried to avoid the obvious.

When I saw the title of this post "It's the glass, stupid", I thought you were reminding the President that under no circumstance should one drink beer directly out of the bottle. I have a feeling that in a few short hours we're gonna see Mr. Obama proudly slugging directly from a Bud Light Limeless Longneck.

Oh, I'd disagree on that, too. I DO drink from the bottle -- not always, but hardly "under no circumstances" -- I drink Sly Fox and Oskar Blues from the can, and I'll be damned if I see why drinking from shaker pints is such a horrible thing. Do you really think that pouring Bud Light into a glass is going to allow it to express its bouquet more expansively, or that anyone drinking Bud Light by choice would notice? Yeesh.

I wrote about it recently. I got caught up in the hysteria.

The truth is that it's not about beer. I don't really care that they are drinking beer, rather, that they are talking about race. Rare in American politics.

But I did give them recommendations based on their preferences:
- Gates: Brooklyn Lager
- Obama: Sam Adam Boston Lager
- Cowler: Allagash White

Well...I think what they're really talking about is climbing down from over-reacting. I don't think race is going to be much of the talk. This is damage control for everyone, including beer.

You're probably right, but in my young age, allow me to live in my idealism.

Fair enough! I'd like to believe something will come out of it, too.

Hey, enough politics. It's over, right?

Maybe not, at least as far as "beer selection" goes. According to a NY Times blog entry from late last night, Gates in an post-beer interview said "...that instead of his usual Red Stripe, he drank a Sam Adams at the meeting in honor of an ancestor who fought in the American Revolution."

"Do you really think that pouring Bud Light into a glass is going to allow it to express its bouquet more expansively, or that anyone drinking Bud Light by choice would notice? Yeesh."

Funniest thing about the Beer Summit is that Joe Biden of all people was drinking a Buckler! Joe, growing up in the beer haven that Scranton is, I'd never expect a non alcoholic beer.

I realize that I sound like a boob in print... However, in my defense, I tried to make my comments as benign as possible.

I was called by a WSJ reporter out of the blue and asked what Sierra Nevada was doing to get their beer at the table... My response was that we are/were doing absolutely nothing.

I frankly don't care what any of the men were drinking. If they want Bucklers and Red Stripe...more power to them.
It is still, last I checked, a free country.

Would it be nice from a PR perspective if they were drinking Sierra? Sure.

This whole "summit" was a bit overblown, and I promise you, based on the volume of hate mail I've received over the past two days, I wish I had kept my mouth shut.

The "summit" is over and my helping of crow has been served...

We all sound dopey sometimes, Bill. I got assigned to write the "con" side of "Seasonals are good for the craft beer industry" a while back, and I felt like a boob...but I took the assignment because, like you, it's the job. I've taken lumps for it too.

Cheers, Bill. Not a great moment for any of us.

My only concern was this whole 'faux' thing beer bloggers were running with last year that Obama was one of us. I knew he wasn't, nor was McCain, but this event showed the truth of it.

Thomas,
Yes and no. He may not be with "us," the craft beer drinkers, but he is with "us," the beer drinkers. He's made that clear, and I think that's worth celebrating. After the free ride wine's been getting because of its vaunted food pairing abilities (and connection to the bow-down, bow-down of French cuisine), it's nice to have a president who isn't uncomfortable preferring beer...of any type. Overall, I'd call it a win.