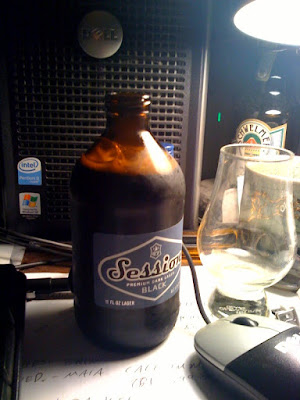 You folks know I love the session beers, mm-hmm. So when Full Sail put out word that they were making a Dark version of their successful Session Lager, I got in touch and asked 'em for a sample. They sent three 11 oz. stubbies, and I'm getting into them tonight.

Lemme tell you a little story first, about why Full Sail decided to brew Session Lager -- about as "macro" a beer as you'll find from a "micro" -- in the first place. Got this from Jamie Emmerson at Full Sail (from an article I did for American Brewer).

“We had some guys working on the house,” Jamie recalled, “and Friday afternoon we brought some Full Sail out for them. But they said ‘No thanks, no thanks.’ Then we see them a few weeks later, and they’re drinking Tecate. So it’s not that they’re cheap. We asked them, ‘Why not Full Sail,’ and they tell us that it’s too heavy, it’s too bitter.

“So I said to Irene,” he said, as the light went on, “we could make a craft lager that could go up against those beers, and it’s the thing to put in that bottle. We worked up a pre-Prohibition pilsner. It’s 5.1% ABV, mostly pale malt, a little bit of wheat, 20 IBU. That took a lot to get dialed in. It was a fine line on how dry the beer had to finish. If you think Heineken is dry, but Corona is sweet, that’s a fine line. It’s all attenuation and mashing.”

Best of all, it’s working. “The response has been great,” he said. “My dad, an old school beer drinker, says it’s just good beer. If you enjoy micro, there’s enough flavor and character; if you don’t, you’re not put off by the color or flavor. The Germans have a saying that the first beer calls for the third. That’s what this beer is about.”

Yeah, it is. A little on the large side for my session beer definition -- 4.5% and under, and this is 5.4% (or 5.3...accounts vary) -- but definitely drink-o-matic. The dark malt actually gives it a slightly tart/burnt edge that cleans it up, a little smoke/roast thing, but not much. With the stubby bottle -- 11 oz., weird, but that's the old Olympia size -- it reminds me of Yuengling Porter.

Great little bottle, I miss steinies. I'd drink quite a few of these. I'm really curious to find out what market they land in. Will local-homer macro-lovers drink a dark beer with this much flavor? Time will tell. I'm going to have another, myself.
Posted by Lew Bryson at 00:21

Lew, I served beer* from steinies: I knew steinies; the steinie bottle was a friend of mine. Sir, that's no steinie (it's a stubby.)

Never quite got a handle on the story behind West Coast's 11 ounce bottles - it wasn't just their stubbies, either- long neck refillables and throw-aways of various design out there were also 11 oz'ers in some cases. (The refillables often had "rings" around the neck- supposedly so when manually sorting empties the brewery workers could "feel" the difference.)

Indeed, it is a stubby...but I miss the steinies that Yuengling Porter (and Chet Ale) came in, that the stubby reminded me of. Sorry for the lack of clarity -- I was generalizing about squat beer bottles in general.

The 11 oz. thing is bizarre. Sam Komlenic and I had a discussion about it the other night, and came to no conclusions. But Jamie said that they were looking for a beer to put in that particular bottle, a "hole" in the shelf facing in the Pacific Northwest. Interesting.

Ah, I thought it might have just been how I was reading your comment (and, to be fair, I've seen period advertising where Western brewers referred to steinie-shaped bottles as "stubbies"- tho' never the other way around).

I've wondered if the West Coast 11 ounce bottle was some way around a particular law in one of the states. Altho' we think of them as particularly beer savvy these days, all 3 states had some unusual beer laws at one time. Oregon used to prohibit non-pasteurized bottled beer, one of them had some ABW restrictions and (I just learned a few weeks ago) California didn't legalize draught beer over 3.2% abw until the mid-1950's.

The strange thing was some brewers had 11 oz. and 12 oz. bottles in the same market (but usually different brands). I notice that Full Sail usually refers to Olympia when they talk about their stubby but when I lived in CA in the mid-1970's, Oly came in a "select" (slant shouldered) bottle - tho' Coors still came in a stubby, as did some Blitz Weinhard beers.

It's indeed nice to see that micros are waking up to the fact that good beer doesn't always have to be a lupulin overdose preserved in ethanol, and spiked with other flavors (often to hide their mistakes, I think).
I'll be looking forward to trying the Full Sail brews sometime soon.

There just may be Pennsylvania beer in real steinies again, ya never know.

1S,
that's why I'm reviewing them here, instead of on the SBP blog. Agreed, 5.4% is not what I call a 'session beer.' But I did enjoy drinking them.

When I reviewed the beer, Jamie sent me this little nugget of info:

"I think it is a very interesting style. Session Black is brewed in a Czech style called Tmave (where is the accent mark in Outlook?)--not as malty as a Munich Dunkles, but not as roasty as Schwartzbier. The lower alcohol versions can be quite sweet, but the higher alcohol versions, like Session Black, are more drinkable to me."

And it should be noted that in Oregon, 5.4% is a session.

Thanks for the info, Jeff, but leave the "in Oregon" tool-waving behind next time!

Well, I wasn't trying to indicate a value judgment there. Readers of my blog know I pine for small beers and admire the really well-crafted ones more than I do most of the DIPAs.

Rather, it was recognition of a truth of the market--I think if Full Sail came out with a beer that was 4-4.5% like you'd expect a session to be, they'd face an uphill battle in this market.

Perhaps it will change, but that the situation now.

No one ever said session beer was easy! As I say in my presentation on session beers, one thing a session beer should do is make you think about why you're drinking. I drink session beers because I like to drink beer, and session strength means I can drink more beer. Brewers just have to learn how to present lower ABV beers, because there is a market out there...just waiting.

Brewers just have to learn how to present lower ABV beers, because there is a market out there...just waiting.

This is where I think you lose me. I've seen lots of nice sessions die on the vine in Oregon. I know that the folks at Full Sail did a lot of market research before releasing the original Session, too. Although tasty, the Session line (is two beers a line?) is a mostly commercial animal. I think it proves my point.

But again, I'm with you. My dream is a beer festival with only beers of 4.9% or less--an all-session fest. Milds and bitters and sessions, oh my!

Same stuff I heard on this coast. And up until about three years ago, it was taken for truth. But brewers have been making lower ABV craft-type beers, and people have been buying and drinking them.

Session, as I understand it from Jamie, was not so much a 'session beer' as it was a beer designed to appeal to macro drinkers. So it's "commercial" nature was designed in.

On the 11 oz. thing: There was a really fun book written by Philip Van Munching, whose family used to be the importers of Heineken, on the beer wars in the U.S. He noted that originally when European brewers entered the U.S. market, they used their standard 300 ml bottle and converted into ounces -- 11.2 oz. They were told by certain states at the time that beer had to be in 12 oz. bottles. They didn't want to change the bottles, so re-labelled them "12 oz.", which was close enough for the states -- there was leeway in what constituted 12 oz. of beer in a bottle...

...all this is to say that maybe the bottles being used by West Coast are 300 ml bottles and that West Coast decided to be honest in the conversion from ml. to oz. than were the giant Euro breweries of old.

Same stuff I heard on this coast. And up until about three years ago, it was taken for truth. But brewers have been making lower ABV craft-type beers, and people have been buying and drinking them.

Well--and I say this with all due respect to both your vast knowledge and beery state--Oregon ain't the other coast. We have a totally different market than you have there, and folks on this coast have tried small beers--to no great success. I won't say it's impossible, but I do bridle a mite when one of you fancy Eastern types tells us hicks that we don't know our own market.

Session, as I understand it from Jamie, was not so much a 'session beer' as it was a beer designed to appeal to macro drinkers. So it's "commercial" nature was designed in.

True. Though I do think the "session" part of it was designed to be evocative. Since our beers are often so big, it was a nod to the backyard beers of old. It was a way of signalling that you could throw a half-rack in the cooler.

Absolutely understood, and I would react the same way. But... There was a lot of geekly resistance on 'this' coast too, and when brewers actually started making the beers and making them available... And marketing them right, they sold. They make sense. We'll talk.

tmave is not a distinct stlye of beer it is just the czech adjective for dark any lager/beer that is dark is called tmavy lezak not really different than Schwarzbier or Dunkel except that is is brewed east of Hof. I miss stubbies and steinies as well . You can still find roundtrip steinies in Gerany though.

Interesting and enlightening discussion! We are on vacation in Hood River and stopped in to Full Sail two nights ago. We were served the Black Session Lager in the stubby instead of on draft so we got to see what the bottle looked like. It was our favorite of the night. I also like and appreciate how easy it is here to get 1/2 pints, which I am starting to prefer to the flight tray of little glasses.

5% is about right. I don't know what it says about my friends & me, but we can drink it all nite. & we start in the mid-afternoon. The original Session didn't really make it, but this black stuff does. & you're right, the stubbies have a nostalgic feel, like what we drank in high school here in WA State.